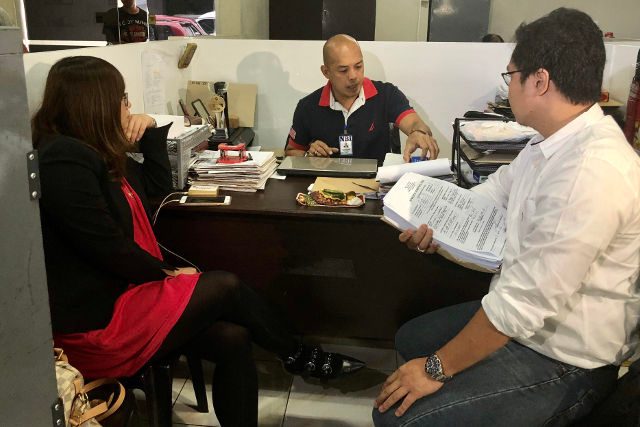 Facebook Twitter Copy URL
Copied
Lawyer Argel Joseph Cabatbat seeks help from the National Bureau of Investigation, asking them to look into the killing of Dan Joseph Alas, who was shot and killed in a coffee shop in Parañaque on December 19, 2017

MANILA, Philippines – Lawyer Argel Joseph Cabatbat linked the ambush he survived on February 13 to an unsolved killing in December last year, claiming that doctor Mark Dennis Menguita is the mastermind to both cases.

With lawyer Karla Frias, Cabatbat sought help from the National Bureau of Investigation to look into the killing of 26-year old barista Dan Joseph Alas, who was shot and killed in a coffee shop in Parañaque on December 19, 2017.

Cabatbat said that like him, Alas received threats and was shot at by 3 men, whom he assumes were the same suspects in his ambush.

Alas filed a bigamy case against Menguita years back, which Cabatbat used to file for the revocation of the doctor’s license for a separate case with an undisclosed client.

In September 2016, Menguita’s medical license was revoked by the Professional Regulation Commission (PRC) Board of Medicine for immoral and/or dishonorable conduct.

Menguita however appealed to the Commission, and was still able to practice.

“Siguro sa dami ng pera niya as a neurologist, at siguro sa galit niya (It’s probably because she earned a lot of money as a neurologist, and also maybe because it was out of anger),” Cabatbat said on Menguita’s possible motivation.

The NBI promised him that it look into the matter to check if the attempted murder and the death of the barista are connected.

“Based sa nakakarating sa aking information, talagang connected itong dalawang ‘to. Based on the information that I received, these two are really connected. I hope NBI can dig into this relationship and their similarity,” Cabatbat said.

Cabatbat’s Montero was fired at by 3 assailants on February 13, but the lawyer was able to retaliate, killing suspect Mark Ayeras, who was later identified as a policeman on leave.

Cabatbat revealed to reporters on Wednesday that prior to Ayeras’ death, he was still able to ask who was responsible for the attempted murder, to which the suspect replied, “Nguita.”

Cabatbat was then convinced that it was the doctor behind the ambush as he was not handling any other “controversial” case at the moment. He also clarified that he does not handle drug cases.

Another suspect, identified as John Paul Napoles, was injured after Cabatbat’s vehicle rammed into the assailants’ motorcyle. Cabatbat planned to visit him at the East Avenue Medical Center to convince him to reveal the mastermind behind the ambush as well.

The Quezon City Police District filed a separate complaint against Napoles for attempted murder and illegal possesion of firearms. Another suspect is being hunted down.

“’Pag ikaw ay nandiyan sa business na yan (When you’re in that line of work), you should be very careful,” he said. “Hindi mo alam kung sinong titira sa ‘yo (You don’t know who’ll take a shot at you). Be careful.” – Rappler.com