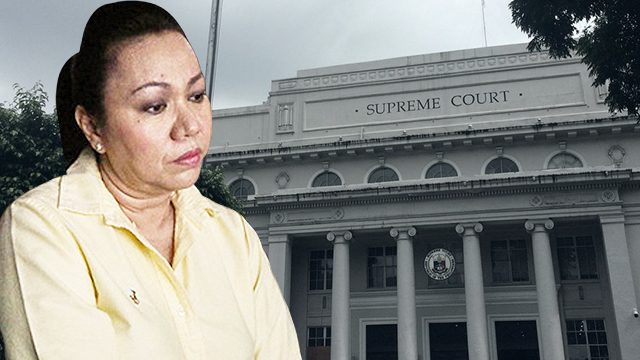 Napoles filed before the SC on February 13 a supplemental petition for bail in former senator Ramon “Bong” Revilla Jr’s plunder case for the pork barrel scam. Revilla has his own pending petition at the SC.

Napoles invoked the SC’s decision acquitting Arroyo of plunder in 2016, noting that a clear crime of plunder must identify a main plunderer.

In September 2017, the Sandiganbayan Special 5th Division also said there is no sufficient evidence identifying Estrada as the main plunderer, so they granted him bail.

In Napoles’ latest petition, a copy of which was received by the Sandiganbayan on Thursday, February 22, Napoles is not only saying she’s not the main plunderer, she’s also saying there are no main plunderers.

Napoles said, “The evidence so far adduced by the Office of the Ombudsman failed to show accused public officers Revilla or [Richard] Cambe as the main plunderer.”

Napoles again used her old argument that she could not have committed plunder because that crime is committed only by public officials. In 2016, however, the SC already junked this argument, saying private individuals can be charged if they acted in conspiracy with public officials.

But Napoles is now using the “main plunderer” principle in saying that the lack of one makes the charges even more vague. (READ: Where do PH judicial bodies stand in the Napoles case?)

In November 2017, the SC junked Napoles’ bail petition related to the case of former senator Juan Ponce Enrile. In that Enrile petition, Napoles argued that the “tainted” credibility of whistle-blower Benhur Luy should be proof that the testimonies against her could be lies.

But even though the SC junked that petition, it didn’t stop Napoles from invoking it again.

“Clearly the only link connecting the petitioner to the whole Priority Development Assistance Fund (PDAF) controversy and this case is the testimony of Benhur Luy, which was declared not credible by the Court of Appeals (CA) in the illegal detention case,” Napoles said.

She was referring to the CA acquitting her in the serious illegal detention case filed by Luy.

Solicitor General Jose Calida, in helping Napoles get acquitted, once said that the CA decision would not affect the pork barrel scam cases.

“The petitioner humbly begs this Honorable Court to take another look and reevaluate her right to bail, considering that the facts charged in the Information and supported by the evidence presented, do not constitute a violation of the provisions of RA 7080 (plunder) in light of the Macapagal Arroyo Supreme Court ruling. Moreover, the Court of Appeals already made a pronouncement that Benhur Luy could not be riled on as a credible witness,” the petition reads.

Napoles must be granted bail in all 3 cases of Enrile, Revilla, and Estrada, so she can be set free. But her lawyer Dennis Buenaventura told Rappler in a July 2017 interview that they are confident Napoles will be free in “less than two years.” – Rappler.com