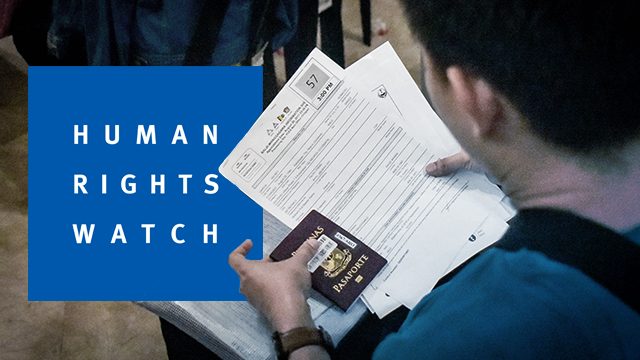 MANILA, Philippines – The Philippines’ ban on the deployment of overseas Filipino workers (OFWs) to Kuwait will likely “increase abuses of workers who are forced to resort to unsafe and unregulated channels to enter the country,” Human Rights Watch (HRW) said on Thursday, February 22.

The Philippine government ordered a total deployment ban to the west Asian country, after reports of abuse against Filipno workers there.

In a statement, the HRW said that previous bans by the Philippines and similar bans by other countries of origin “did little to end abuses in Kuwait or other Middle Eastern countries,” as those who are desperate to work still find ways to migrate through unsafe and unregulated channels.

“These can leave them exposed to abuse and trafficking and make it more difficult to address abuses,” the HRW said.

Instead, the human rights organization said that Kuwait and the Philippines should instead make key reforms that could more effectively protect migrant domestic workers in Kuwait.

“The Philippines should work with Kuwait to protect workers rather than ban them from migrating, which is more likely to cause harm than to help,” said Rothna Begum, Middle East women’s rights researcher for HRW.

Kuwait, meanwhile, “should confront the outcry over deaths, beatings, and rapes of domestic workers by taking immediate steps to reform the kafala system, which traps workers with abusive employers.”

The kafala system ties migrant domestic workers’ visas to their employers, prohibiting workers from leaving or changing jobs without their employers’ consent. Violators can be arrested for “absconding” and fined, imprisoned, deported, and barred from returning to Kuwait for 6 years.

HRW said that the kafala system forces workers to remain with abusive employers and punish those who try to flee.

More than 250,000 Filipinos are in Kuwait, mostly working as domestic workers.

In 2015, Kuwait passed a law extending labor protections to domestic workers for the first time, including the right to a weekly rest day, 12-hour working day with rest periods, annual paid leave, and overtime compensation. Kuwait is also the first in the Gulf region to pass a minimum monthly wage for domestic workers.

But the HRW also noted that the law is weaker than Kuwait’s main labor law and fails, for instance, to provide for workplace inspections at homes.

In response to the ban, the Kuwaiti cabinet authorized a state-owned recruitment agency to find workers from Indonesia, Vietnam, Bangladesh, and Nepal instead.

But Begum also criticized the move, saying that the Kuwaiti government should fight the root causes of abuse of domestic workers before looking to recruit workers from other countries.

“Domestic workers from other countries like Indonesia, Bangladesh, and Nepal have faced similar problems in Kuwait,” Begum said.

He encouraged a bilateral agreement between the two governments, saying that “while bilateral agreements have many limitations, they can be helpful when there is an agreed upon mutually enforceable employment contract that provides real protections, and effective complaint systems and investigation procedures.”

On January, the Philippine Department of Labor and Employment suspended the processing of overseas employment certificates (OEC) for Filipino workers bound to Kuwait, pending an investigation into 7 deaths of domestic workers in the gulf country. The total ban followed in February.  – Rappler.com