Archbishop Villegas to De Lima: Your detention is ‘biggest symbol’ of PH decay

Feb 23, 2018 9:11 PM PHT
Paterno Esmaquel II
Facebook Twitter Copy URL
Copied
'I do not know why God is allowing all this moral decay to happen to our country,' says Archbishop Villegas as Senator De Lima marks her first year in jail 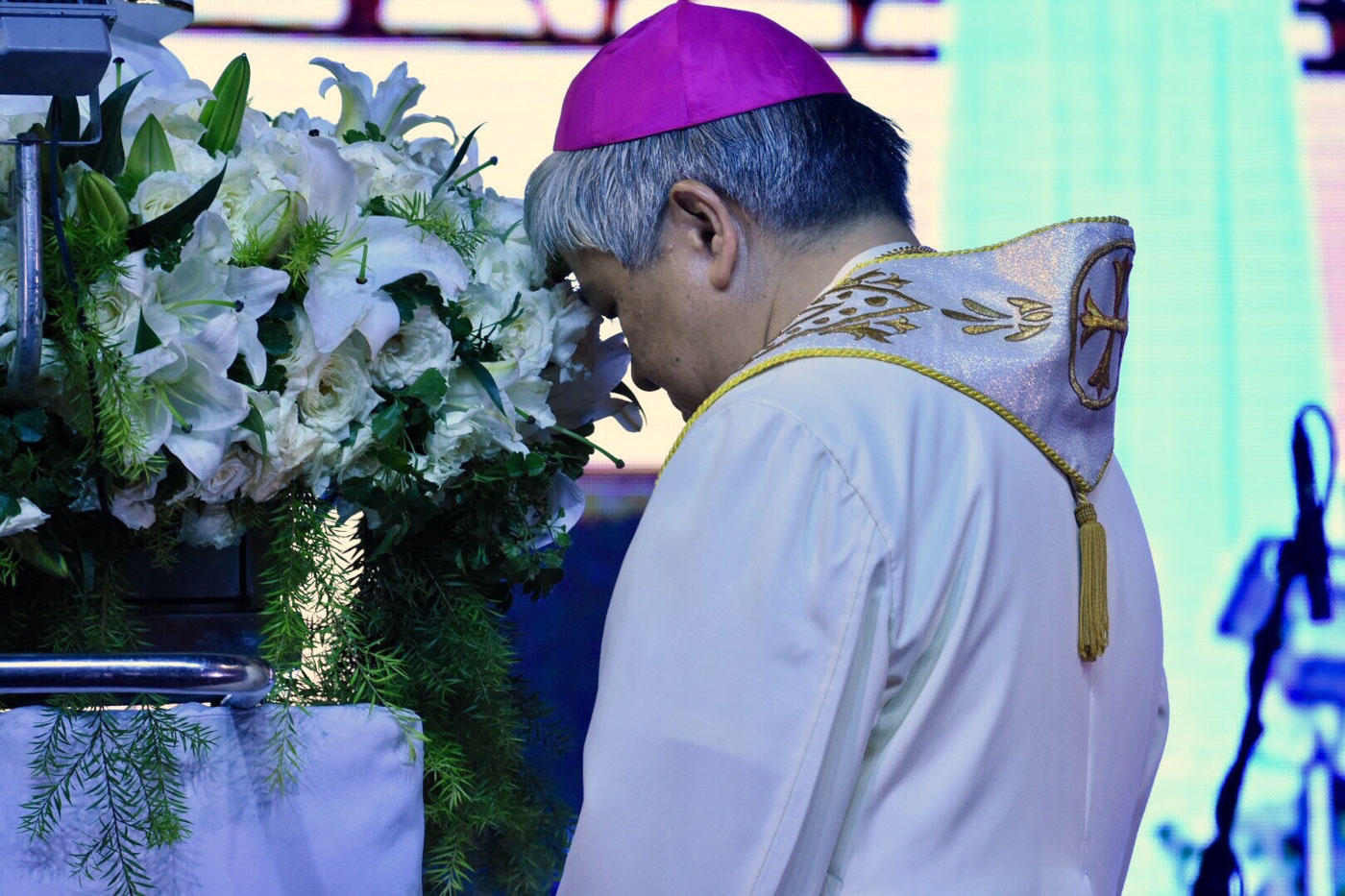 MANILA, Philippines – The detention of Senator Leila de Lima, who is marking her first year in jail on Saturday, February 24, is the “biggest symbol” of the “moral decay” besetting the Philippines under President Rodrigo Duterte.

Lingayen-Dagupan Archbishop Socrates Villegas, former president of the Catholic Bishops’ Conference of the Philippines, wrote this in a message to De Lima dated February 24, in time for De Lima’s first year in detention.

Villegas is set to deliver this message in a Mass on Saturday at the Philippine National Police Custodial Center in Camp Crame, where De Lima is detained. (READ: De Lima: One year of living and surviving in jail)

“There are some of us who are beginning to feel a fatigue for loving our country. I came here to grieve with you because your detention is the biggest symbol of what is wrong with our country; but your faith and courage is also the best symbol of hope for what we can do to heal this land,” Villegas wrote.

Villegas also took a jab at “the blood thirst of our sickening leaders.”

“I do not know why God is allowing all this moral decay to happen to our country, the first Christian country in this part of the world,” the archbishop said.

“I am ashamed of our Catholic countrymen who find lewd words funny. I am puzzled deeply by the scandalous adulation and applause that foul language elicits in the national forum. How persons are genitalized rather than respected,” he said.

Duterte is known for his unconventional way of wearing the barong Tagalog, rolling up its sleeves and leaving its collar unbuttoned.

“How the barong Tagalog is worn now at home and out of the country is the pathetic symbol of our national malady. It is a shame,” Villegas said.

Read the full text of Villegas’ letter to De Lima below:

I do not know why you are detained. I cannot accept that you are here when you could be contributing so much for the good of our country. I do not know why God has allowed this to happen to you.

I do not know why God is allowing all this moral decay to happen to our country, the first Christian country in this part of the world.

I am ashamed of our Catholic countrymen who find lewd words funny. I am puzzled deeply by the scandalous adulation and applause that foul language elicits in the national forum. How persons are genitalized rather than respected. How decency has evaporated into thin air and replaced by manners that even kanto boys will find repulsive.

I am incredulous at seeing how fake news has proliferated so fast like a plague for the spirit. I cannot believe that people flaunt the money they make by deceiving others. I cannot understand how ignorant officials are honored as the epitome of intelligence and the thinking ones are ridiculed and called absurd and anachronistic!

I cannot fathom the unlimited capacity of men in power to tell lies and I am aghast even more at the unlimited acceptance of deception by our people.

I often catch myself unable to say a word to react to the indecent insinuations to change or make new laws to make immorality easier to do or to legalize the serial rape of our nationhood. The shameless statements are incredible!

Even the once admired and adored justices in Padre Faura are showing signs that the Court is now compromised and Lady Justice is now peeping through her blindfold, tilting the scales of justice to favor the creeping dictatorship.

I did not come here with answers. I did not come here to add to your frustrations about our nation. There are some of us who are beginning to feel a fatigue for loving our country.  I came here to grieve with you because your detention is the biggest symbol of what is wrong with our country; but your faith and courage is also the best symbol of hope for what we can do to heal this land.

I came here to be inspired and you have always done that, even if you are not aware, each time I remember you in my prayers.

You are not a saint and so am I. You are not perfect and so are we all. But in your human imperfections, God has placed you here behind bars, cut off from the rest of us your fellow dreamers, so that you can offer the pains of your sacrifice for the healing of our land. Do not give up lifting up to the Lord the anguish of your immoral detention. You are blessing many Filipinos by this sacrifice.

How I wish I could do what the Lord sent His disciples to do… to release those in bondage and to set His people free. But I do not have the means. But what I can give you, I bring you now – the blessings of the Lord who will never forsake His children who call on His holy name. You may have to endure for a little while more, but believe that the justice of God, and not of men, will reign; the Kingdom of Truth will be restored and integrity and decency will flow again through this land.

I know you cannot be happy here but you can have joy. Indeed our faith in the Lord gives us the grace of joy in sufferings, in trials and adversities. Joy and sufferings can be compatible twins if we allow the Lord to enter the aches of our souls. The joy of the Lord is our strength.

With you I declare this credo as a Filipino hoping that this will resound beyond the walls of your jail and heal our nation.

We believe in God Almighty, loving and merciful.

We believe that the Philippines is a nation favored by God and that the Filipinos are a people loved by the Almighty.

We affirm that the Filipino is trustworthy and truthful.

We uphold that the Filipino is by nature respectful towards the elderly, the weak, the young, the women, indeed, every person.

We are against lies thrown from all sides, obscenity in action, in words and in our way of life. I will refuse to laugh at lewd language. I reject all fake news.

Killing another, whether innocent or guilty, is against our character as Filipinos.

We believe that divine justice shall befall upon a nation that stands on the corpses of its murdered sons and daughters. Killing your very own cries to heaven for the vengeance of God.

I respect and I will defend those public servants who put the country first before their personal interests, even though they are maligned or jailed for doing so.

We reject corruption of the country’s resources, the adulation of traitors and liars, and the concealment of the sins of the greedy and the marauders.

We are against illegal drugs and all forms of crime.

We are ready to fight them with courage and determination, always according to God’s laws and the laws of life, and never according to the whims of those in authority or the blood thirst of our sickening leaders.

I will defend the Philippines against Filipinos who oppress their own and against foreigners who threaten our independence; not by violence nor harassment, not by turning a blind eye for the sake of friendship; but through the help of God who listens to the cry of His people who suffer. I will always pursue respectful dialogue with truth in love.

I believe that God will heal the Philippines right now.

Heroism shall thrive anew and a new dawn shall break upon the true Filipino. The Philippines has hope through the help and mercy of God. We will overcome. Amen.