Public and private hospitals to put up dengue express lanes 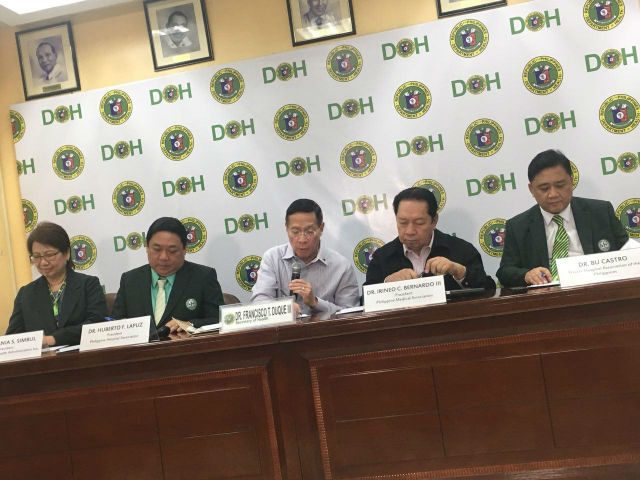 MANILA, Philippines – The Department of Health (DOH) has teamed up with associations of hospitals to put up dengue express lanes in both public and private hospitals for children who got the Dengvaxia dengue vaccine.

Why put up the fast lanes: On Tuesday, March 6, Health Secretary Francisco Duque III led the signing of a memorandum of agreement (MOA) with the following hospital organizations:

According to Duque, the initiative is a “confidence-building measure” to allay the fears of parents of the vaccinated children. (READ: TIMELINE: Dengue vaccination program for public school students)

“This is on account of the clamor of parents when I had a meeting with them 3 or 4 weeks ago and also even earlier when I did my rounds of the different schools in NCR, Central Luzon, Calabarzon, and Cebu. This is some kind of a confidence-building measure to ensure the vaccinees are given priority,” said Duque.

Details of the MOA: Under the agreement, public hospitals as well as private hospitals that are members of the said associations will now put up a “one-stop-shop express lane, table, or room” to cater solely to the needs of children who got immunized with Dengvaxia under the now-suspended government vaccination program.

The MOA indicates a 1:1 to doctor-to-patient ratio in handling the Dengvaxia-related cases, “except when there are other patients who are in simultaneous emergency situations.”

Patients will also be given a Dengvaxia monitoring card to make it easier for the DOH and the hospitals to identify they are among the vaccinated children.

The MOA stipulates the expenses of the vaccinated children will be covered by the Philippine Health Insurance Corporation under its No Balance Billing program. This includes the fees of students who will be confined due to dengue.

But what if the child’s symptoms are not due to dengue? Duque explained a vaccinated child may develop another disease that is completely unrelated to Dengvaxia or dengue. This can be validated once the kid is sent to the hospital for diagnosis.

In such cases, the DOH will still cover their expenses through its Medical Assistance Program.

Why it matters: The dengue fast lanes are part of DOH efforts to address the fallout over the controversial dengue vaccination program, launched by then health chief Janette Garin in April 2016 and suspended by Duque in December 2017.

Duque had to halt the program after Dengvaxia maker Sanofi Pasteur said its vaccine may lead to a severe case of dengue fever in people who had no dengue infection prior to vaccination.

Parents have begun reporting that some of the vaccinated children died after getting a shot of Dengvaxia.

This prompted the DOH to ask experts from the University of the Philippines-Philippine General Hospital (UP-PGH) to study clinical records of the children to determine if Dengvaxia caused their deaths.

No clear evidence of that has been established yet. The UP-PGH experts, however, said 3 out of the 14 cases they studied so far died of dengue despite getting the vaccine.

The PAO’s findings, however, have been questioned by both public health experts and lawmakers, who said the hysteria sparked by PAO’s probe is making parents lose confidence in other DOH vaccination programs. – Rappler.com