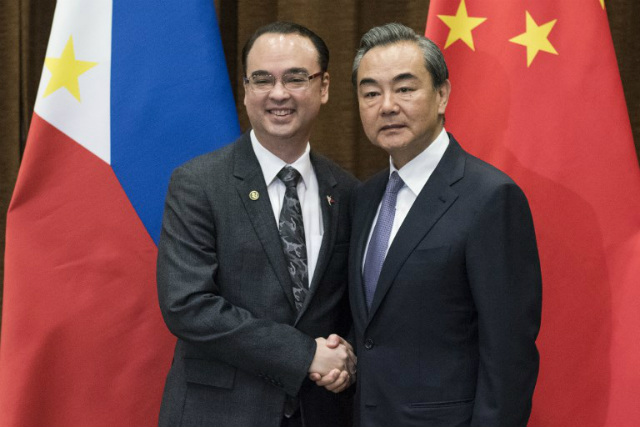 MANILA, Philippines – Unlike Manila, Beijing has never said the West Philippine Sea, or the part of the South China Sea that belongs to the Philippines, is “disputed.”

China has always asserted it has “indisputable sovereignty” over the islands there, and their surrounding waters.

Acting Chief Justice Antonio Carpio earlier said Filipinos should stop calling its waters the “disputed” West Philippine Sea, as a Hague tribunal “has already ruled with finality” on the issue.

While the Hague tribunal had no jurisdiction over disputed islands, it upheld the Philippines’ rights over its 200 nautical mile exclusive economic zone (EEZ) in the South China Sea. The EEZ is the area where a coastal state has exclusive rights to explore and exploit marine resources.

What the Philippines says

“What are we going to do? Will we pretend it’s not disputed? So let’s be practical. Because we’re calling it disputed, it doesn’t mean that we’re not saying it’s ours,” said Philippine Foreign Secretary Alan Peter Cayetano on Tuesday, March 6.

What Carpio compares it to

“It’s like you have a land, you own it, somebody builds a house there and claims that he owns it also. So you go to court and finally the court says you own the land. Unfortunately, the guy who built the house doesn’t want to leave. So the question of ownership is finished; it’s terminated already. You own it, because the court said you own it. It’s now a question of compliance – how to get him out of that lot. That is the situation in the West Philippine Sea,” said Acting Chief Justice Antonio Carpio in a Headstart interview on Monday, March 5.

What Cayetano compares it to

Cayetano likened the West Philippine Sea issue to the case of Rappler’s registration, which the Securities and Exchange Commission revoked and is now under appeal.

Here is part of Cayetano’s interview with reporters on Tuesday:

CAYETANO: Because the UNCLOS does not deal with territorial disputes.

RAPPLER: Yeah, but just talking about the waters.

CAYETANO: Let me ask you a question. Is there a dispute whether Rappler is a foreign entity, or hindi? May court decision na, ‘di ba (or not? There’s a court decision already, right)? But you’re disputing it.

CAYETANO: There’s a SEC decision. But you’re disputing it. ‘Di ba (Right)? So it’s not fair for me to say it’s settled na (already). I have to say it’s disputed.

It is, for Cayetano, an issue of fairness – to the other side. – Rappler.com