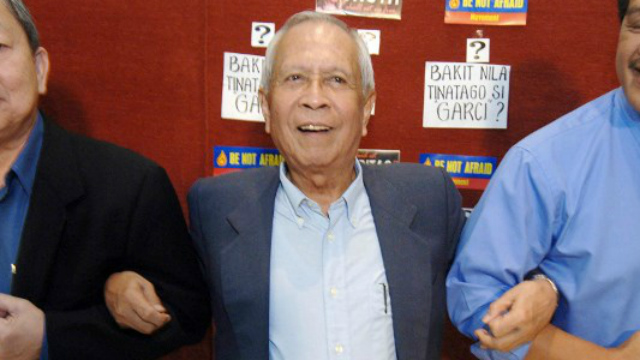 “I love you SO much, Lolo. Rest well. It was an honor and a privilege to see you fight your biggest battle,” Abat posted on Facebook before giving further details of her grandfather’s death and wake.

“Former Defense Secretary Fortunato U. Abat died on March 7, 2018. He was 92….  Sec. Abat is survived by his wife, Corazon, and his children, grandchildren and great-grandchildren. His remains will lie in state at Loyola Commonwealth and will be interred at the Libingan ng mga Bayani.”

She said instead of sending flowers, the family would appreciate a contribution to the Hero Foundation, “a cause close to the heart of Gen. Abat.”

Born on June 10, 1925 in La Union, Abat had a “colorful” military career starting with his enlistment in April 15, 1944 to serve during World War II. He graduated from the Philippine Military Academy in 1951.

He eventually became a commanding general of the Philippine Army from 1976 to 1981. Upon retiring from military service in 1981, he briefly joined the Ministry of Human Settlements and was later appointed as Philippine Ambassador to the People’s Republic of China.

When the Marcos dictatorship was toppled in 1986, Abat was appointed as administrator of the Philippine Veterans Affairs Office after the EDSA People Power Revolution in 1986. He was later named as DND undersecretary under the terms of both defense secretaries Rafael Ileto and Ramos.

Under the presidency of Ramos, Abat headed the government peace panel during its negotiation with the Moro National Liberation Front (MNLF). He was appointed as DND Secretary in 1997 until the end of the Ramos presidency in 1998.

Abat, together with some members of his group Coalition for National Solidarity, was arrested in 2005 after he proclaimed himself as president under a Philippine revolutionary government.

He has consistently called on then president Gloria Macapagal Arroyo to step down following allegations of election fraud.

Abat also served as chairman of the Military Service Board under then president Benigno Aquino III. – Rappler.com