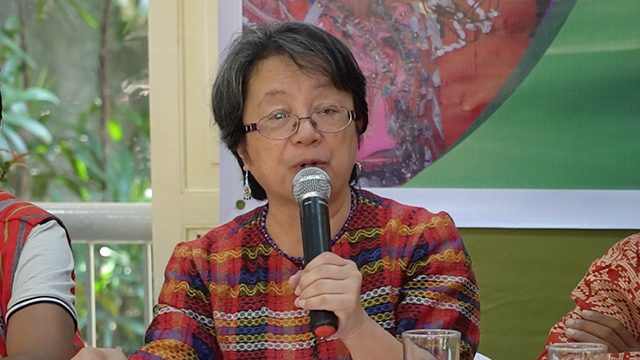 MANILA, Philippines – Malacañang is standing by the petition of the Department of Justice (DOJ) seeking to declare as terrorists 649 people, including the first Filipina to hold a special rapporteur post at the United Nations (UN) – Victoria Tauli-Corpuz.

Corpuz and her colleagues at UN have denounced the terrorist tag, but Presidential Spokesperson Harry Roque said it is an opportunity for the UN to take a look at their process of selecting rapporteurs.

“Perhaps the UN Rapporteur system should fine-tune its selection process to ensure that individuals identified with terrorist groups are not given any mandate by the UN Human Rights Council,” Roque said in a briefing held in Iloilo on Saturday, March 10.

Roque added: “The DOJ would not have filed the petition without evidence that she is a member of or somewhere affiliated with the CPP-NPA.”

Roque said that Corpuz can always challenge it in court.

“In our legal system, we adhere to the rule of law and hence, Ms Victoria Tauli-Corpuz can submit controverting evidence to what I am sure the DOJ already has linking her with the terrorist group – the CPP-NPA,” he added.

In a statement, Corpuz said she is seeking legal action to “make accountable those who put my life and security at risk.”

Corpuz, an Igorot from the Kankana-ey tribe in Besao, Mountain Province, was the first woman and indigenous person from the Philippines to assume the position previously held by men.

She has been serving as special rapporteur on the rights of indigenous peoples since 2014.

The list on the DOJ’ petition was slammed by human rights advocates as red-tagging, or publicly naming individuals critical to the government as state enemies.

“It is part of a shotgun witch hunt designed to sow and create a condition of widespread and extraordinary fear and panic among the populace, in order to coerce the critics, dissenters, social activists, human rights defenders and revolutionaries alike to give in to the government’s repressive demand,” said human rights lawyer Edre Olalia.

Among the individuals on the DOJ petition is Communist Party of the Philippines founding chairman Jose Maria Sison, who retorted by calling President Rodrigo Duterte the “No. 1 terrorist in the Philippines.”

Roque challenged Sison to also fight it in court.

The terrorist tag is the bitter end of what used to be promising peace negotiations between the communist party and Duterte. – Rappler.com