Before ordering the release, Gordon did not ask Faeldon any questions on the latter’s alleged involvement in the corruption inside the Bureau of Customs (BOC). Faeldon has yet to answer allegations against him.

The senator, who has a habit of raising his voice at resource persons, talked to Faeldon softly on Monday, March 12, during the continuation of the hearing on the “tara” system.

Gordon even teased Faeldon to “smile” as he looks better when he does so: “Ganyan dapat nakatawa ka. You look much better when you smile.”

“So, we will call you on your cognizance that when we ask you a question, there will be no more backtalking and you will answer the question directly.”

Faeldon responded in the affirmative and said he commits to that.

“Alright, so the committee chair hereby orders your release from incarceration,” Gordon said.

“You’re hereby relased subject to the fact that you will conduct yourself as we go on the hearings when we need to. Is that understood?” he added. 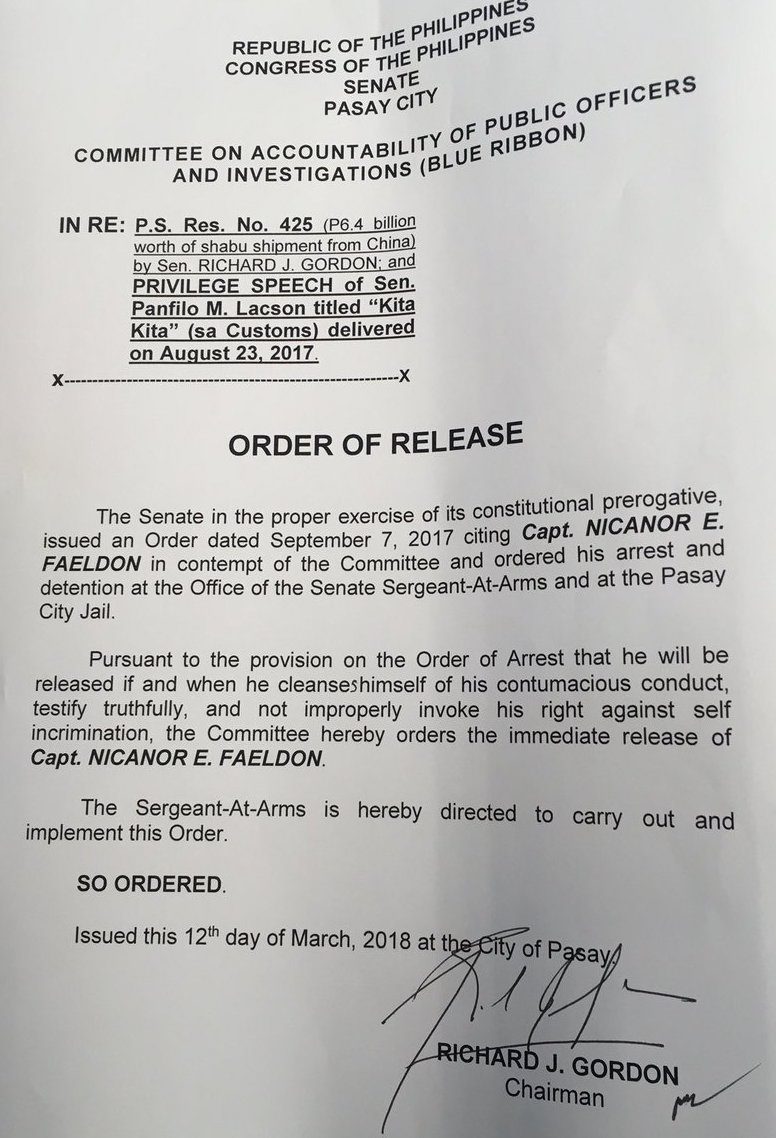 Faeldon was detained at the Pasay City jail after the Senate cited him in contempt for repeatedly skipping Senate hearings on the issue.

Senator Antonio Trillanes IV earlier said Faeldon is “at the heart” of the P6.4-billion worth of smuggled shabu from China while Senator Panfilo Lacson said Faeldon is among the officials receiving “tara” or bribe money.

The Department of Justice (DOJ) earlier cleared Faeldon from the drug smuggling case, saying Faeldon and other customs officials will not be charged.

Faeldon was removed from the BOC but was appointed deputy administrator of the Office of the Civil Defense. – Rappler.com