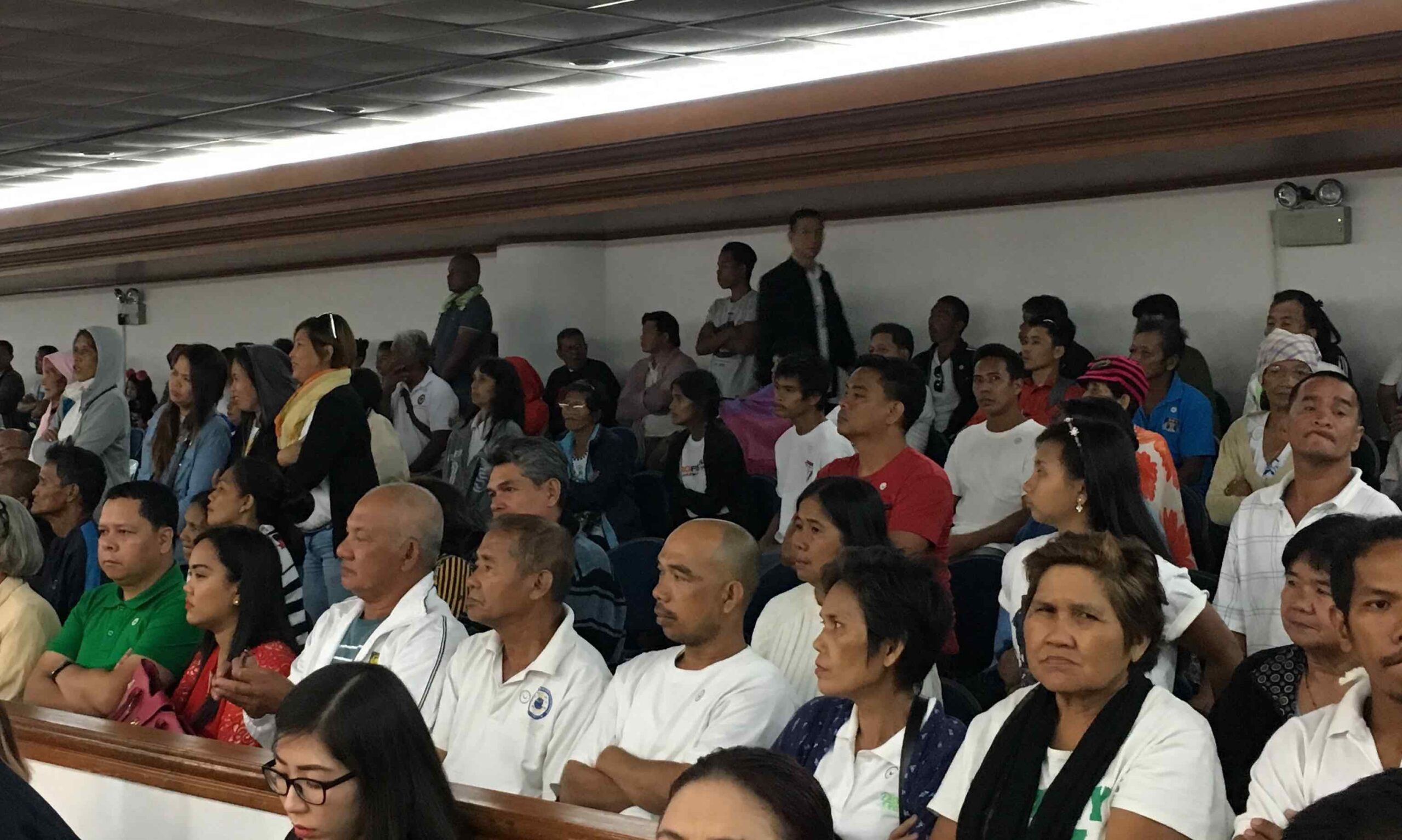 MANILA, Philippines – At least 130 coconut farmers from the Kilusang Magniniyog trooped to the Senate on Monday, March 12, to oppose Senate President Pro-Tempore Ralph Recto’s amendments to the coco levy trust fund bill, but to no avail.

In the end, the Senate approved on 2nd reading Recto’s version of the measure, which rejected the original proposal to create a Trust Fund Committee under the Office of the President, which former senator Wigberto Tañada called the “soul” of the measure. Recto said creating another committee would “bloat the bureaucracy” and delay the process.

This body would have granted farmers a bigger role in managing the P76-billion coco levy fund, together with government officials. The coco levy refers to the tax imposed on farmers under the Marcos administration but which was used to buy and invest in businesses of the late dictator’s cronies. (READ: Coco levy fund scam: Gold for the corrupt, crumbs for farmers)

Voting 12-3, the chamber accepted Recto’s amendment to consolidate everything under the Philippine Coconut Authority.

“I said that if an industry is in crisis, efforts to revive it must be quick and massive. If the patient is in ICU, then the treatment must be immediate and in adequate dosage, so that the recovery will be fast,” Recto said.

Under Recto’s amendment, the PCA Board would be expanded from the current 7 to 11 members – 6 coconut farmers’ representatives and 5 government officials. Just like the Trust Fund Committee, the Board would also have the power to create the roadmap for the industry, as well as approve the sale of other coco levy assets.

Aside from Recto, the other 11 senators who voted for his amendment are the following:

The 3 who opposed it were Senator Francis Pangilinan, sponsor of the measure, Senate Minority Leader Franklin Drilon, and Senator Risa Hontiveros.

Farmers are against the PCA becoming the central authority, citing the involvement of the agency itself  in the coco levy scam. They also said that because the PCA is “overburdened”, it would be hard for it to focus on the complexity of the coco levy funds.

On the surface, Recto’s PCA amendment is similar to the farmers-backed proposal. But it is not.

Here is where the second amendment comes in. The Senate adopted Recto’s proposal to make the funds subject to congressional approval for “transparency, citing the misuse of off-budget funds such as Malampaya and the Road Board. This would be done by including the coco levy funds in the General Appropriations Act or the national budget.

This means that even if the PCA Board approves a roadmap, it is still up to Congress to enact a budget to fund it – which farmers strongly opposed. After all, it is their money to begin with, they said, citing the 2014 Supreme Court ruling.

To counter the transparency argument, Pangilinan said that even if the funds are included in the special fund, Congress still has oversight functions over it. But in the end, 9 senators voted in favor of the amendment while 5 rejected it.

(In truth, we are not pretentious, it really hurts us. This fund did not appear in an instant just to be given to government. This was the product of hard work of coconut farmers, who were taxed that’s why we have this billions of pesos now. It really came from the farmers…What’s happening now is they don’t want to include the farmers…What’s saddening there is that they are creating space just for them to be able to say we have a role…The truth is, we were excluded from that fight. They should have tried to listen to us in discussions about our preferred law.)

The 9 who voted for inclusion of the funds in the GAA are the following:

The 5 who voted to keep the fund strictly for coconut farmers were:

Former senator Wigberto Tañada, for his part, was disappointed but said he would rather focus on the positive – that the bill is moving forward. The House of Representatives already approved a similar measure in 2017.

“Well [watered down] in so far as the removal of the trust fund committee is concerned dahil gusto namin ma-retain [yun] (because we would have wanted it retained),” Tañada said.

“It’s good that it was approved on 2nd reading. Although there were amendments that were not acceptable for us, the bill will still go through the bicameral conference committee of the Senate and the House. Our coconut farmers have long waited for this, almost 40 years now…At least we have moved forward,” he added in a mix of Filipino and English.

The Senate is expected to pass the measure on final reading next week. After this, both chambers are set to convene a bicameral conference committee to thresh out differences between their versions. It is expected to be bloody, considering the huge discrepancies between the two versions. – Rappler.com