Mar 13, 2018 7:05 PM PHT
Facebook Twitter Copy URL
Copied
Senators say the recommendation of a Department of Justice panel to drop charges against suspected drug lords Peter Lim and Kerwin Espinosa proves that the drug war is 'anti-poor' and a 'sham' 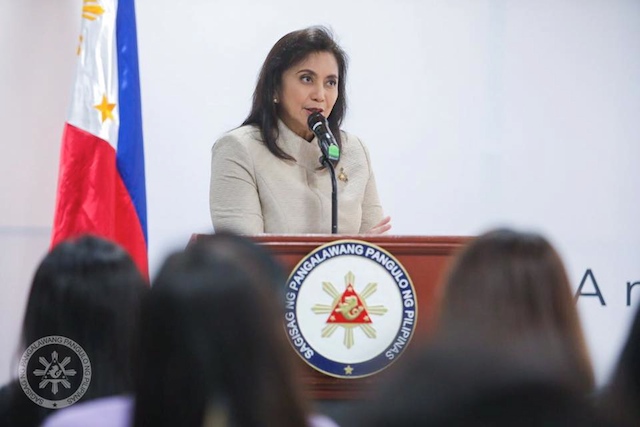 Robredo aired her concern in response to questions on the dropping of drug charges against Lim and Espinosa in a media interview on the sidelines of the ADP Women Empowerment and Gender Equality Talk in Makati City.

(The dismissal of the case is frightening because, first of all, one is a self-confessed drug pusher. In fact, he’s one of the witnesses against Senator De Lima, claiming he gave her drug money. What does that say?)

Robredo said the development is “unsettling” because it touches on two very important matters: rule of law and trust in institutions.

Senator Grace Poe had the same question. She said she was “disturbed” by the DOJ recommendation as Espinosa himself had “admitted before a Senate inquiry that he was indeed involved in the drug trade.”

“How a self-confessed drug lord like Kerwin Espinosa can be exonerated by the State is perplexing. It reflects the sloppiness of the police’s investigation and case buildup against these drug lords,” Poe said.

She said the prosecution should have used “the entire machinery of the State’s prosecution arm to gather more testimonial and object evidence, rather than lazily relying on this single witness,” whose testimony it had deemed as weak.

Senator Risa Hontiveros said in a statement that the DOJ panel’s decision “weakens” the case against De lima. (READ: Kerwin Espinosa: I gave P8M to De Lima through Ronnie Dayan)

“With the DOJ clearing Espinosa of any involvement with the illegal drug trade, it only follows that it also nullifies Espinosa’s charges against Senator De Lima,” she said.

She noted that the drug charges against De Lima were “based solely on the testimonies made by convicted and self-confessed drug lords who have everything to gain and nothing to lose.”

The Liberal Party (LP) reiterated its call to release De Lima, a member.

“We continue to assert that Leila de Lima is innocent. Her only crime was to hold government to account for human rights abuses and extra-judicial killings. We call for her immediate release,” the LP added.

Senators said the DOJ panel’s recommendation  “proved” the Duterte’s administration’s war on drugs to be “anti-poor” and a “sham.”

“The dismissal of the said charges shows how duplicitous and a complete fraud the bloody drug war is. This latest development demonstrates how the Duterte government’s war on drugs is a sham,” said Hontiveros.

The senator noted that De Lima  had been “unjustly jailed” over drug charges, and thousands of mostly poor people had been killed in the drug war while big-time drug lords like Lim and Espinosa were “not only allowed to evade the long arm of the law but also cleared of any wrongdoing.”

“I guess it pays to be Kerwin or in the case of Mr Lim, the President’s kumpare,” Hontiveros said.

Duterte and Lim are principal sponsors at the wedding of Beatriz Amanda Borja, daughter of Fernando “Ding” Borja, president of Adnama Mining Resources Incorporated in June 2016.

Senator Antonio Trillanes IV said, “The DOJ’s exoneration of these known druglords is yet another proof that what Duterte unleashed upon us is a fake drug war.”

(In the case of poor people, no questions asked – they’re killed immediately. For drug lords and, of course, the kumpare of Duterte, you won’t only get due process, you’ll be exonerated as well. In the case of Senator De Lima, who is a political foe, even if the scripted testimony has become so twisted, a case was immediately filed in court to jail her. Mr Duterte, you’re fooling the people.)

Senator Francis Pangilinan said people allegedly found with a few grams of shabu are killed in the drug war while “influential people, the rich, and those implicated in the P6.4-million shabu smuggling remain free,” a view shared by Senator Paolo Benigno Aquino IV .

The LP said in a statement that the DOJ recommendation “highlights the administration’s poor record for due process and fair play.”

Senate Minority Leader Franklin Drilon, a former justice secretary, said he “cannot believe” that Justice Secretary Alexander Aguirre II was not consulted about the decision of the DOJ panel. The decision was made in December 2017, but the media only learned, and reported, about it on Monday, March 12.

“The President should review this, because the Office of the President has supervision and control over all Cabinet secretaries,” Drilon added.

The PNP filed a motion for reconsideration with the DOJ seeking to reverse the decision of the panel. – With reports from Camille Elemia / Rappler.com