Sharon Garin on why legislators must ‘earn their keep’ Facebook Twitter Copy URL
Copied
When she talks to Rappler, it’s not the politics and internal dynamics Deputy Speaker Sharon Garin zooms in on, but the hard work that’s seldom aired live or broadcast on primetime news

MANILA, Philippines – When Sharon Garin enters a room, it is usually without fanfare or pretense. In committee hearings, the 3rd-term representative from AAMBIS-OWWA slips into the hall quickly and pulls a chair.

She listens intently, takes down notes, nods when a resource person makes sense, or chats with the colleague sitting beside her. She is seldom attention-grabbing, but in the rare times she does, she manages to make a lawyer cry.

Midway through her last consecutive term in the House, the 46-year-old Garin is, more or less, an expert on how Congress works.

When she talks to Rappler, it’s not the politics and internal dynamics she zooms in on, but the hard work that’s seldom aired live or broadcast on primetime news. 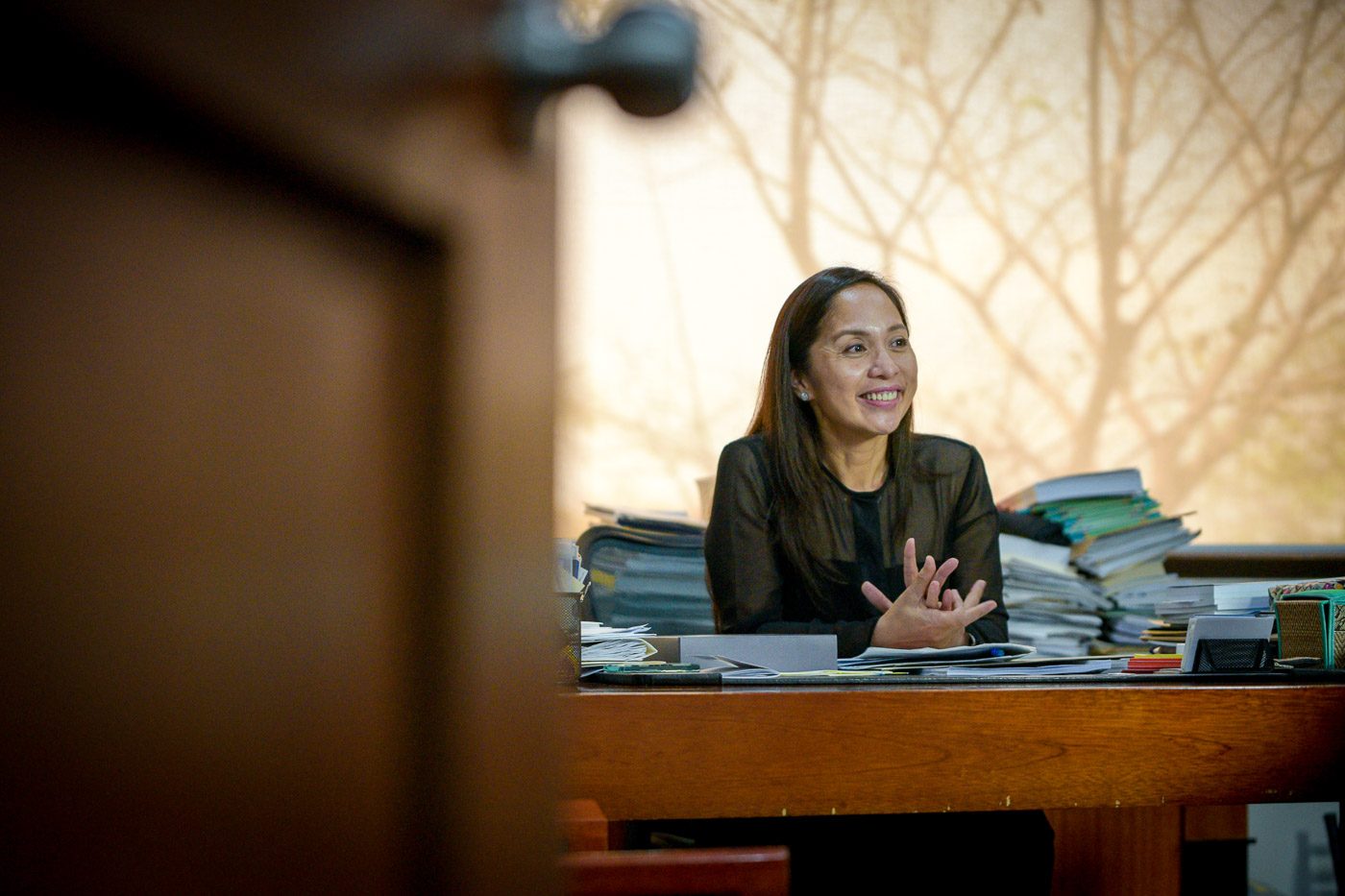 It’s a process that’s easy to follow, in theory, but both dedicated and casual observers of the 17th Congress – and all Congresses before that – will know that one too many legislators put a premium on noise, name, and fury over content.

She is also very self-aware of both the privileges she was born into and the handicaps she has as a woman from a political clan in a male-dominated institution like Congress.

And Garin is among the House’s more notable members. She’s an accountant and lawyer by profession, whose first entry into politics was as representative of the party-list organization, the one she holds now.

As part of Rappler’s celebration of National Women’s Month, we talk to Deputy Speaker Sharon Garin on the challenges of being a legislator, a mother, a House leader, and a woman.

Why she ran for a seat in Congress

I have a family who’s into politics, so it was a natural course for me, actually. When I was still in law school in Ateneo, my dad already wanted me to run for board member. But I was in KB (Kabataang Barangay), or was it SK (Sangguniang Kabataan)?

It was a natural course when you’re young and you have politicians as parents because you get exposed – when they go for their social activities, ’yung mga (the) community projects, we go along with them. You give dole outs whenever there’s a calamity, so it’s ingrained, actually. [But] it’s not like you inherit a position.

When I went into law school, I really wanted to be a lawyer, and I took accounting just as a fallback, just in case I wouldn’t pass law school. So when my father wanted me to run for board member at that time…[I told myself that] I had to finish something before I would present myself as a candidate because just ’cause you’re the child of a congressman, and you have that family name, doesn’t mean that you have all the capabilities to serve the people.

I made it a point to finish my studies, be a CPA (Certified Public Accountant), to be a lawyer, to practice law, I even went abroad for my MBA (Masters in Business Administration). So I really finished [studying] until I had a child – marrying and having a child, I finished before I got into politics. I’m one of the latecomers in my family.

Ups and downs of being a Garin

It’s easier [to be part of a political clan] in the sense na established na. You know, in politics, unfortunately, but fortunately for me, family name is a brand, right? It shouldn’t be. It shouldn’t be. Consciously, maybe it’s the UP (University of the Philippines) training and all that, so there’s a part of me that’s still an activist and that’s why I wanted to finish everything that I wanted to do because, politics, you can win and lose, but a law degree, you will always have that.

All my immediate family members were in certain elected positions. Yes, there is a big advantage. Now to keep that up, that’s hard because you pale in comparison [to your family] if you don’t do your work, right?

Being a woman in Congress

I don’t think Filipinos, male Filipinos…I don’t think there’s any discrimination against women. I’ve been to many conference outside the Philippines and I see that, if we compare the Filipinos, we’re in a relatively good place. In the house, it’s the woman who dominates, even in the communities, the church, the parents of 4Ps (Pantawid Pamilyang Pilipino Program), it’s the woman who takes a lead role. Barangay health workers are often more influential than male barangay captains. Even in the corporate world, we’re number one in Asia or Southeast Asia.

Me, I have to be more assertive when I have to drive a point. Even the other deputy speakers. You notice how they deliberate, they’re very strong. You have to prove your position. Being a mom who happens to be a lawmaker

I think, when a child comes out of you, there’s a chip that changes and turns you into something. It changes, really. Priorities are different. The husband comes second. Your child is your child. It’s different. It’s difficult but, you know, the pleasures you get out of that hard work is immeasurable.

[My son] doesn’t have any [idea about my being a lawmaker]. And I avoid it because this is temporary, right? When I’m done here, it’s done.

Yes, it’s a job and, yes, it’s a job in the government. Probably, he senses some importance to it. But not really that I’d explain to him and everything. He just thinks I work as a lawyer and all I say is “objection!”

But, no, I don’t really [tell him because] I don’t want him to get used to the idea. Because this is not really…it’s not a job that will be with me until he is 21.

Working hard and ‘earning your keep’

I try not to be very political about everything. I just do my work. I have certain topics that I choose that interest me or are also for my advocacy, like women, agri, tax because of my profession, I choose those. I try to excel in those fields. I choose those because I think I can serve better with that. I don’t meddle with other things. So it’s really just work. Maybe I see this as a profession.

When I applied for deputy speakership, I even wrote the Speaker an application letter, saying these are my credentials. I treat this as a job.

Best and worst parts of being in Congress

The best part? It’s to be with people who are there. We look different, we have different heights, different beauties, we speak different dialects. But each and every person here won an election and that says something…so you really cannot underestimate any person here.

It’s a lesson I treasure because here…even if you don’t like the way they speak, even, you know, the things they stand for…but this person represents what, 200, 300, or 500,000 votes? It’s hard to win an election. You have to give everybody the respect they deserve. What’s the worst part? The worst part of Congress is that it’s very slow. But that goes with everything in government. For example, during my first term, I was so excited because I could do something about coco levy.

But until now…it still isn’t a law. But we’ve been on it. You have to have the diligence. Because if you don’t fight for it, you lose the fight. But it’s…and I think the first-termers are realizing right now that it’s so slow.

Even [the Reproductive Health Law], right? It was passed in my first term, but it started 15 years ago. So that’s probably the most frustrating part because it’s so slow. But then, again, it’s a checks-and-balances thing. If it’s too fast, like some issues that pass through the House…if it’s too fast, there’s a chance it won’t be done right.

We’re just passing by. Always, like when you talk about the divorce law or as Speaker wants to call it, the dissolution of marriage. It’s been proposed for a long time. Now it’s back. It’s just at the committee level, but somebody will always take over. There will be somebody who has the same views.

It’s just like the RH Law, the Magna Carta for Women. The process is continuous, it does not stop. So I feel that even if I leave Congress, there will always be something that will trigger [important legislation] to propel.

To me, a woman is strong. Because how can a woman not be strong to be a mother, a wife, to be…working? That’s a very difficult 3 jobs you have there. I’m lucky that I went through Congress because I’ve seen the many strong women here – intelligent, strong women. Some are just quiet but come their second term, third term, you’ll see that they will excel. It’s the same thing that happened to me. Women, Filipinas especially, are some of the strongest women I’ve met.