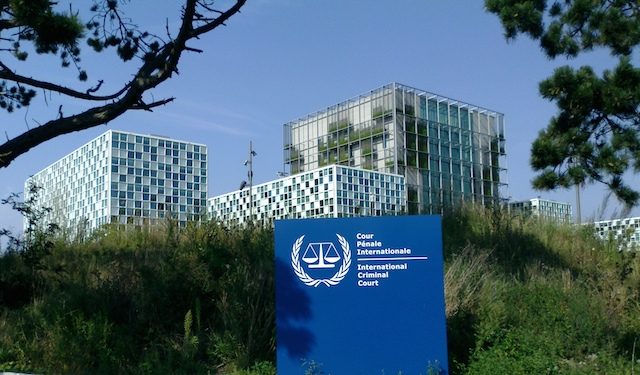 MANILA, Philippines – Presidential Spokesperson Harry Roque on Thursday, March 15, denied that President Rodrigo Duterte’s bid to withdraw the Philippines from the International Criminal Court (ICC) is a sign of cowardice.

Asked about criticism that the move was prompted by Duterte’s fear of facing the  ICC, Roque said in a Palace news briefing, “No, because if it pushes through, the President has not said he will not participate.”

Roque said that as an ICC-accredited lawyer, he will suggest to Duterte that the President face any charges the ICC may make in relation to the complaint on his drug war filed by Filipino lawyers.

“My suggestion would probably be, ‘Let’s face it,'” said Roque, one of those who lobbied for the Philippines to join the ICC by ratifying the Rome Statute, the treaty that created the court.

In an interview on CNN Philippines on Thursday, Chief Presidential Counsel Salvador Panelo also denied that the withdrawal from the ICC is linked to the challenge Duterte faces in the court.

“Definitely not. We know the character of the President, he’s tough and he faces challenges, all kinds, against all odds,” he said.

Asked why it’s necessary for the Philippines to withdraw from the Rome Statute when Duterte was already confident the ICC has no jurisdiction over him, Panelo said the withdrawal is just a courtesy to the court.

“Because we signed. When we signed it, so it’s a matter of courtesy that you inform. Kumbaga, ‘Hoy, iyong pinirmahan namin diyan ha, hindi effective iyan dahil unang-una, marami kayong violations (So it’s like saying, ‘Hey, what we signed is not effective because you have so many violations.,'” said Panelo.

Duterte’s order vs probes: While Roque insists Duterte never said he would not participate in the ICC’s probe, the President already publicly ordered police to ignore any human rights experts’ investigation into his bloody drug war.

Duterte had also told police not to provide the Commission on Human Rights with files related to their anti-drug operations. (READ: Evading probes? The many times Duterte admin didn’t give drug war documents)

In declaring the country’s withdrawal from the ICC, Duterte issued a rare statement  outlining his arguments on why the court cannot charge him with an international crime against human rights.

Contradiction: Duterte’s insistence that he is beyond the reach of the ICC contradicts his own earlier statement that he “welcomes” the court’s preliminary examination. (READ: Duterte to ICC: ‘If you find me guilty, go ahead’)

Malacañang earlier said the President welcomed the ICC process as an opportunity  to clear himself.

“The President welcomes the preliminary examination because he is sick and tired of being accused of the commission of crimes against humanity….If need be, he will argue his case personally and face the ICC,” Roque said in February, when he confirmed that the ICC would begin preliminary examinations on the complaint against the Philippine leader. – Rappler.com