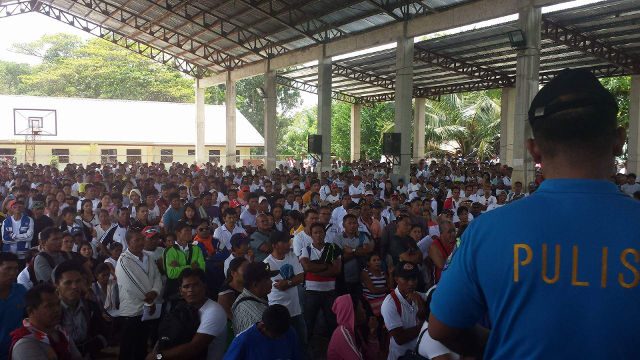 BOHOL, Philippines – Local authorities here are on the lookout of a province-wide scam allegedly perpetrated by individuals from Luzon who claimed to have connections with Malacañang and President Rodrigo Duterte himself.

The developments followed after the arrest over the weekend of a group leader who enticed people to join a self-styled movement dubbed as the “People’s Congress” and “Anti-Graft League of the Philippines – We Support Federalism.”

Police identified the suspect as Celestino Estimada Java Jr., a native of Barangay San Pascual, Ubay town. Java was charged in court on March 12 for alleged violations of Section 6 of Batas Pambansa 880 and Section 257 of Republic Act 7642.

Police said Java, who allegedly operated under the instruction of “bosses” from Luzon, posted bail for his release from lock-up.

Chief Inspector Roland Desiree Lavisto, of Ubay Police Station, said Java allegedly demanded P500 from each participant at the “congress” meeting – P150 for registration and P350 for a t-shirt.

More than 3,000 people attended the event in Ubay town over the weekend, but they were sent home by the police after Java failed to present government permits including legal documents supporting his organization.

“Many of this kind of activities had been conducted in other towns of Bohol,” Lavisto told Rappler in an interview on Thursday, March 15.

“What is alarming is that people were promised of shares of gold from the Marcos family and employment under a revolutionary government,” Lavisto added.

After taking an oath of allegiance to the causes of federalism, each member was assured of a government job that would pay them at least P29,000 a month, including a future share for each “congress” member of gold bullion worth P5 million, police said.

Earlier, the Department of Interior and Local Government (DILG), in an advisory, warned the public that a group of scammers linked to Matias were visiting various places in the country, recruiting individuals, for a fee, to join the so-called “People’s Congress.”

DILG Secretary Eduardo Año in a statement had warned the public concerning impostors who offered government positions in exchange for money.

The DILG said these scammers have been initiating assemblies in the towns and barangays, announcing they had been authorized by Malacañang to offer government positions in preparation for Duterte’s revolutionary government.

(The Philippine National Police has been alerted and ordered to investigate the group’s activities. The public should know it is a scam and they should stay away from the scammers at all cost)

Saturday’s arrest was the first successful crackdown here of an activity linked to a fake federalism movement, according to Damalerio.

He said the provincial government will use its resources and implement the full force of the law to arrest those behind the racket. – Rappler.com