Mar 16, 2018 11:11 AM PHT
Lian Buan
Facebook Twitter Copy URL
Copied
De Lima’s camp will manifest to the court the different standards that DOJ applied to the senator and to Peter Lim and Kerwin Espinosa, who were earlier cleared of drug trading by a prosecution panel 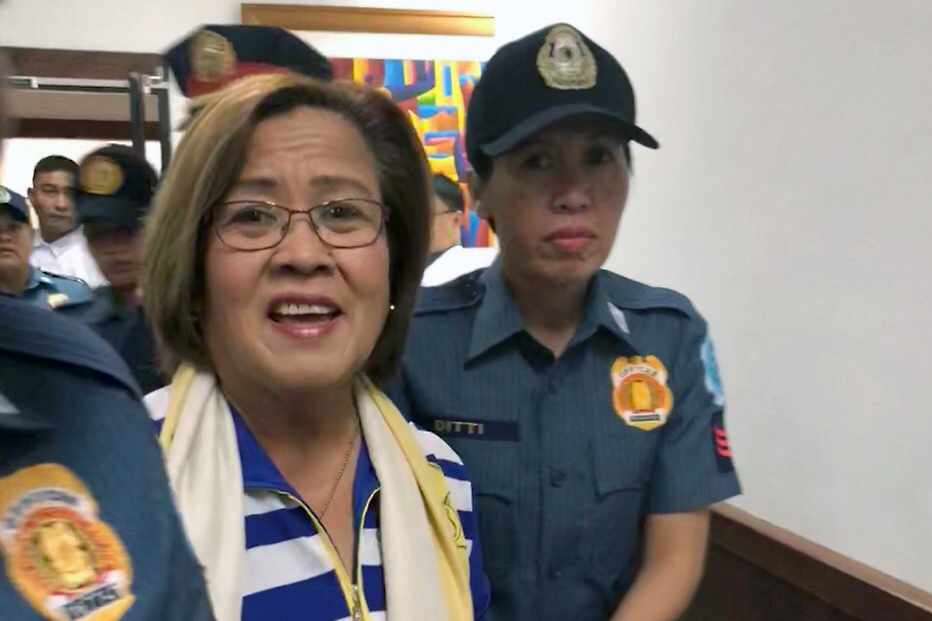 MANILA, Philippines – Detained Senator Leila de Lima’s arraignment was reset once again on Friday, March 16, as she demanded the Department of Justice (DOJ) prosecutors to show their physical evidence against her.

De Lima was supposed to be arraigned on Friday for two of the three drug trade charges against her, now being handled by Muntinlupa Regional Trial Court (RTC) Branch 205, but the settings were postponed due to her pending motion.

De Lima’s Omnibus Motion requested the court, among others, to order the DOJ to produce their physical evidence against her and let her lawyers inspect them.

De Lima, the staunchest critic of President Rodrigo Duterte, is accused of conspiring with her subordinates when she was still the justice secretary, as well as her bodyguard-cum-lover Ronnie Dayan, to solicit campaign funds from drug convicts inside Bilibid. Drug convicts testified to trading illegal drugs inside prison to produce the money.

De Lima was joined in court on Friday by Dayan and another former aide, Joenel Sanchez. The three were cordial in court, chit-chatting and smiling at each other at times. De Lima’s supporters, however, booed Dayan as he was being taken back to the Muntinlupa City Jail.

The next schedules for arraignment are on May 18, which now makes this case one year and three months going without an arraignment.

WATCH: De Lima’s supporters boo Ronnie Dayan as he is escorted back to the Muntinlupa City Jail after a set arraignment that was postponed pic.twitter.com/TMfiKBO3QD

Tacardon said they plan to file a manifestation to the court about how DOJ’s dismissal of charges against alleged drug lords Peter Lim and Kerwin Espinosa and drug convict Peter Co affects their case.

Co and Espinosa testified against De Lima at the DOJ level. Co was cleared of the charges to be utilized as state witness along with other inmates.

(The DOJ’s decision in dismissing the charges against Peter Lim and Kerwin Espinosa are the same reasons we have been raising long before. There is no physical proof of drugs, but in Kerwin’s case they dismissed the charges. But when they charged De Lima, there was no proof of drugs, but they followed a different standard, they said it was not necessary.)

The Police Criminal Investigation and Detection Group (CIDG) has complained to Justice Secretary Vitaliano Aguirre II that Espinosa was no longer a credible state witness. Espinosa remains under the Witness Protection Program (WPP).

DOJ Senior Assistant State Prosecutor Ramonsito Ocampo confirmed that former BuCor officer-in-charge Rafael Ragos is now free and considered state witness. He was formerly charged with De Lima in one of the cases, as supposedly among the senator’s cohorts.

“He has already executed an affidavit,” Ocampo said.

The DOJ also asked the court to order the Philippine National Police (PNP) Custodial Center to explain why they should not be sanctioned for failing to bring to the court on Friday former Bureau of Corrrections (BuCor) chief Franklin Jesus Bucayu.

Bucayu and De Lima are both detained inside the custodial center, but the police claimed they were notified late of the order to bring Bucayu too. The court said there was only one notice for De Lima and Bucayu.  – Rappler.com