7 things you need to know about PMA valedictorians, barons 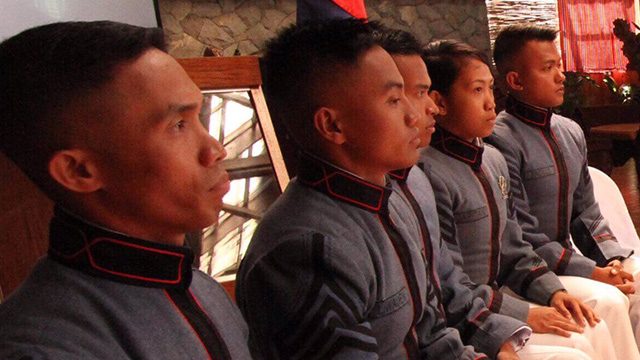 BAGUIO CITY, Philippines – Philippine Military Academy (PMA) Cadet First Class Jaywardene Galilea Hontoria, who will be graduating together with his 281 mistahs or classmates on Sunday, March 18, will be rewriting history as the 4th to graduate from the academy as both valedictorian and baron.

None of the first 3 became the chief of staff of the Armed Forces of the Philippines, but ideally, Hontoria would be the first among his peers to be promoted to a higher rank. Hontoria also wears the longest chevron in the corps of cadet; right now, he has 7.

Ahead of Sunday’s PMA graduation, here are 7 things you need to know about the academy’s valedictorians and barons.

1. The class baron is the first captain and, unofficially, the president of the whole class.

According to the PMA Gazette, the baron is “the immediate assistant of the commandant of cadets in the discipline, interior administration, training and general efficiency of the cadet corps.”

2. The first PMA baron to become valedictorian is Brigadier General Aristeo Torcelino Feraren, who was born in December 30, 1913 in Ermita.

Feraren’s class, the Class of 1938, was the first to graduate under the PMA.

After graduating from the PMA as valedictorian, Feraren was assigned to the Corps of Engineers. He was a survivor of the Death March, and was captured after destroying bridges in Bataan supposedly to debilitate the Japanese forces as part of the Corps of Engineers. After surviving the war, he became the first battalion commander of the 24th BCT responsible for the mopping-up operations of the Hukbalahap.

Regis became a junior aide of former president Ramon Magsaysay, and was among the 24 people who perished with Magsaysay after the tragic crash of the PAF C-47 in Cebu in March 1957. The former Regis Hall in PMA was named after him.

4. Only a few know about Manuel Antonio Arevalo, who was both valedictorian and baron of PMA Class of 1964.

According to the PMA Gazette, Arevalo was actually running 2nd in the class a month before graduation, but the class valedictorian was involved in an honor code violation that led to his resignation.

Arevalo led a quiet life. He obtained a master’s degree from the Asian Institute of Management and served both the military and the business sector. 6. Gregorio Honasan II, who graduated in 1971, is probably PMA’s most famous baron.

He joined the Scout Rangers and later became security chief of former defense secretary Juan Ponce Enrile. They helped start the failed coup that led to the EDSA Revolution in 1986.

Honasan was the first independent candidate to earn a Senate seat in 1995. He is now on his 3rd term as Senator. His fellow senator Panfilo Lacson also belongs to the legendary PMA Matatag Class of 1971.

7. Ever since the PMA began admitting women in 1993, there have been female valedictorians, a female Bow-wow (a PMA term for the regimental adjutant) and a female goat (last in the order of merit), but there has yet to be a female PMA baron. – Rappler.com