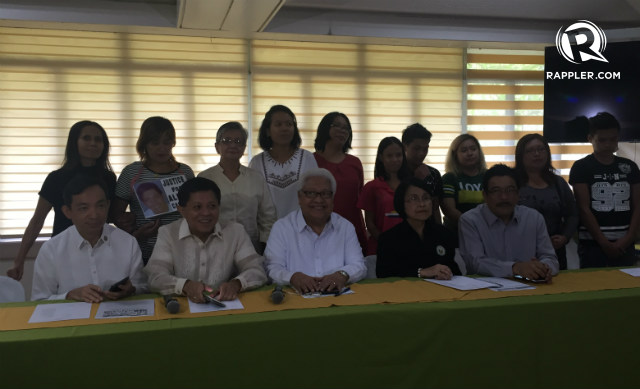 MANILA, Philippines – Acknowledging the crucial role of lawmakers, some members of the House of Representatives have formed a group which seeks to improve the human rights situation in the Philippines under President Rodrigo Duterte.

Launched on Monday, March 19, Mambabatas Para Sa Karapatang Pantao (Makatao) will tap the “multi-faceted role of legislators” in fulfilling the state’s role to protect the human rights of its citizens.

“While human rights are inherent in a human being without need of any constitutional or statutory grant, legislation is still indispensable for the triple objectives of respecting, protecting, and fulfilling human rights,” said Albay 1st District Representative Edcel Lagman, the group’s lead convenor.

Makatao also aims to be a “powerhouse lobby group” that would push for rights-based laws and rights-based governance, as well as oppose measures that pose threats and serve as a link between Congress and the people.

“The act of legislation can be both arduous and lengthy,” Lagman said. “We hope that Makatao could hasten or expedite the legislative process for human rights measures.”

Including Lagman, the group has 13 founding members who, according to the Albay congressman, “have crossed party lines.” They include:

The move comes at a time when the concept of human rights, according to critics, is being “demonized” by Duterte and his allies.

Makatao’s top priority in its legislative agenda is the passage of the Human Rights Defenders Protection Law.

“But keeping both our eyes closed and our lips sealed amid the unabated summary killings and unexplained disappearances is an offense of omission which condones and exacerbates crimes against humanity.”

The Philippines is often referred to as one of the most dangerous countries in the world to be a human rights defender. At least 600 have been killed since 2001, with at least 4 human rights workers killed under the Duterte administration so far. (READ: Prone to abuse: state surveillance as a tool to silence critics)

“Let us hold accountable or responsible through legislation, court proceeding, and mass action all perpetrators of human rights violations, from the President down to the rank and file of the military, police, and civil service,” Lagman said. – Rappler.com