Revilla asks Supreme Court: Do something, I’m the only one left in jail 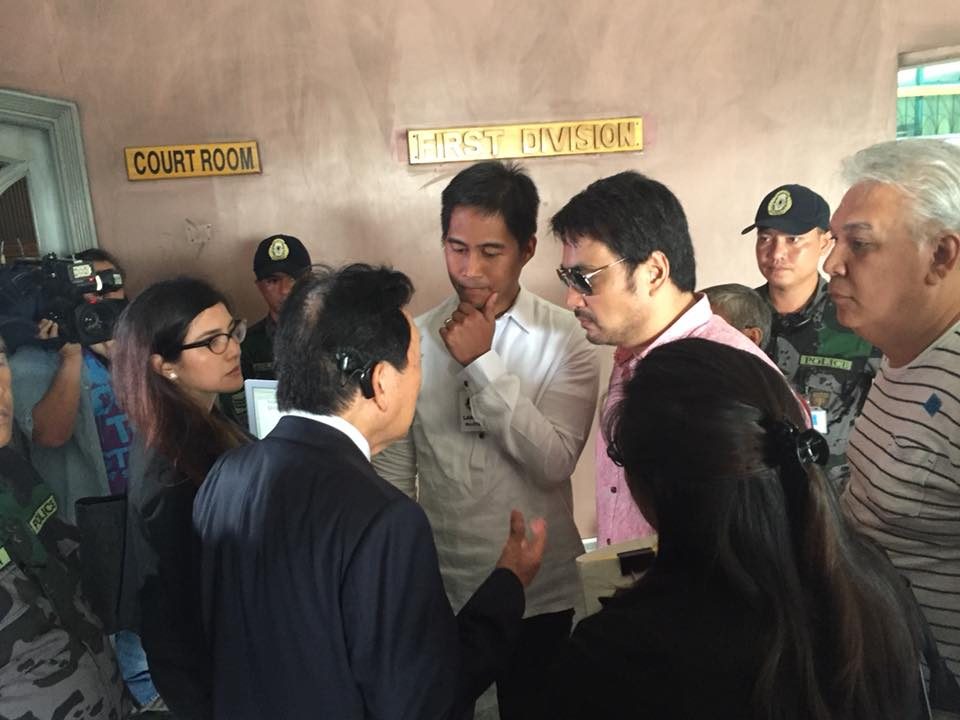 Facebook Twitter Copy URL
Copied
The former senator and now plunder defendant files an urgent motion before the High Court requesting for ‘interim measures,’ one of which is provisional liberty

MANILA, Philippines – Former senator and plunder defendant Ramon “Bong” Revilla Jr filed an urgent motion before the Supreme Court (SC) as he continued to refrain from presenting his evidence before the anti-graft court Sandiganbayan, counting on the SC to step in and stop the trial.

In a motion filed before the SC on March 16, Revilla urged the High Court for “interim measures” including a provisional liberty.

Revilla had filed before the SC in January a holistic petition that included numerous requests. Among these petitions were his provisional liberty, the total dismissal of the charges, a temporary restraining order (TRO) against the Sandiganbayan trial, and at the very least, an oral argument on the matter.

In his latest urgent motion, he even asked the SC to require the Sandiganbayan to respond to his petition. Last February 6, the SC deferred action on the matter.

“Aware that the Court may not act immediately on the petition but through certain procedures, petitioner prayed by way of interim measures for the Court to immediately grant the following,” the urgent motion said.

When the SC deferred action, Revilla’s lawyer Estelito Mendoza filed a motion before the Sandiganbayan asking to cancel the hearings because as he said, the SC is too preoccupied with the plight of Chief Justice Maria Lourdes Sereno to act on their petition.

Sandiganbayan continues to hold trial, although Revilla has managed to delay his turn presenting evidence.

“Given these injudicious circumstances, petitioner was constrained to give up several trial dates out of the sixty dates allowed by the Sandiganbayan for him to present evidence and he is already in peril of losing all the dates allowed for his defense,” Revilla told the SC.

Former senator Jinggoy Estrada has been granted bail and himself undergoing trial, while former senator Juan Ponce Enrile has been free since 2015 and his case has been stuck at the pre-trial level.

Revilla claims he is ready to present witnesses but didn’t identify them yet. He said he trusts the strategy of his lead counsel Mendoza, who opts to go the Supreme Court route. Mendoza got Enrile out of detention at the Supreme Court level.

As for Janet Napoles, Revilla said her becoming a state witness would benefit him: “Baka nga makatulong pa sa kaso ko yun. Baka nga ma-clear pa niya ako, kaya mas maganda kung siya umupo.” (Maybe she could help my case. Maybe she could clear me, so it’s better that she sits down as witness.)

Napoles’ lawyer Stephen David, however, has told the Sandiganbayan 1st Division that his client would not testify in Revilla’s trial.

Cambe’s presentation was delayed because he had gotten himself a new lawyer and they needed to complete paperwork to make it official to the court.

Cambe, who is also detained in Camp Crame, has been his own lawyer, and even resorted to request the court to be allowed a laptop and a pocket internet in jail so he could write his pleadings there.

Ombudsman prosecutors presented local government officials and bank officials to link Revilla to Napoles projects. Their smoking gun is the findings of the Anti-Money Laundering Council (AMLC) that deposits made to Revilla’s account match the amounts and dates on Benhur Luy’s records. – Rappler.com