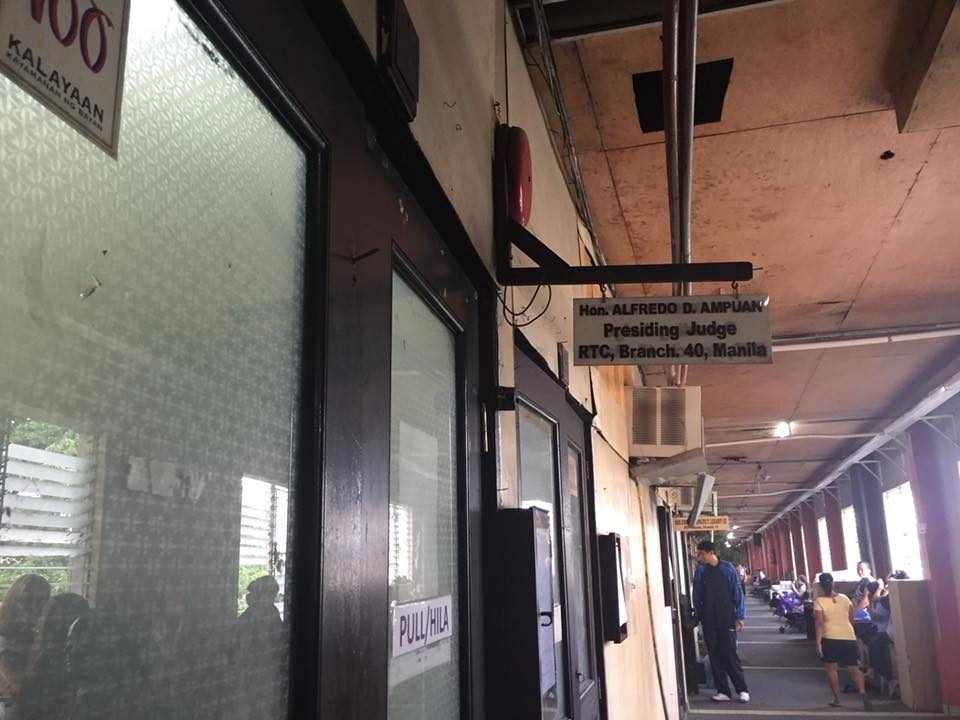 Facebook Twitter Copy URL
Copied
The fratmen allege that Judge Alfredo Ampuan is the brother-in-law of Dante Jimenez, head of the Volunteers Against Crime and Corruption, who assisted the Castillos during the preliminary investigation

MANILA, Philippines – After the issuance of arrest warrants against the Aegis Juris fraternity members in the Horacio “Atio” Castillo II slay case, two of the accused filed a motion for inhibition against Judge Alfredo Ampuan of the Manila Regional Trial Court (RTC) Branch 40.

They based their motion on the fact that Ampuan is the brother-in-law of Dante Jimenez, who heads the Volunteers Against Crime and Corruption (VACC), and had assisted the Castillo family during the preliminary investigation of the case.

“Judge is incapable of rendering fair and impartial adjudication of the instant case because he is the brother-in-law of Mr Dante Jimenez, President of Volunteers Against Crime and Corruption (VACC),” said the motion filed by Jose Miguel Salamat and John Robin Ramos early Morning Friday, March 23.

According to Salamat and Ramos, Ampuan’s wife, Marilissa Jimenez Ampuan, is the sister of Jimenez. They attached a photo of Mrs Ampuan, Judge Ampuan, and Jimenez at an event of the Mariners Polytechnic Colleges (MPC). “Mr Jimenez is the chairman of the MPC while the President and CEO is the Judge’s wife, Mrs Marilissa Jimenez-Ampuan,” their motion said.

Jimenez assisted Castillo’s family during the preliminary investigation and appeared on several occasions at the Department of Justice (DOJ).

Judge Ampuan issued the resolution after he found probable cause to issue warrants of arrest against the 10 fratmen before the courts closed afternoon of Thursday, March 22.

Branch 40 staff confirmed to reporters that as of Friday morning, the warrants have been given to the police to be served on the accused.

What happens next? The Manila Police District (MPD) has to arrest all 10 fraternity members, and submit to the court a return of warrant if all 10 of them have been arrested.

Can they post bail? No, or at least not yet. Violation of the anti-hazing law, if it results to death, is a non-bailable charge.

But, the fratmen have filed a motion to be granted bail. During the first hearing on March 16, Judge Ampuan said he will set those motions for hearing after the warrants of arrest are issued. That hearing date is yet to be scheduled.

JUST IN: After order to arrest them, Two Aegis Juris fratmen Miguel Salamat and Robin Ramos file for motion for inihibition against Judge Alfredo Ampuan because “he is the brother in law of VACC chairman Dante Jimenez.” @rapplerdotcom pic.twitter.com/8gXwsk5IYx