As Uber gives up Philippine operations to Grab, what now for commuters?

Mar 26, 2018 7:50 PM PHT
Chrisee Dela Paz
Facebook Twitter Copy URL
Copied
'Obviously, it is not good. From a duopoly, it becomes a monopoly,' warns an economist 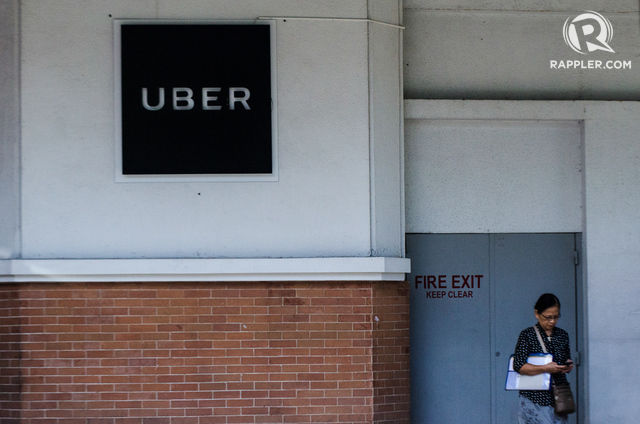 MANILA, Philippines – An economist warned that Filipino commuters could face higher fares and fewer incentives, after California-based Uber decided to sell its entire Southeast Asian business to its rival Grab.

Ending stiff competition between the ride-hailing behemoths, Uber on Monday, March 26, sold its operations in Southeast Asia to Grab. In turn, Uber will receive a 27.5% stake in the business.

“Obviously, it is not good. From a duopoly, it becomes a monopoly,” Fernando Aldaba, dean and professor of economics at the Ateneo de Manila University and a senior fellow of Eagle Watch, told Rappler.

“Without competition, prices may go up and quality of service might deteriorate,” Aldaba added.

Uber drivers in the Philippines on Monday started receiving emails from the transport network company, asking them to transition to the Grab platform by April 8 – or two weeks from now. (READ: Uber drivers in Southeast Asia moving to Grab in 2 weeks) 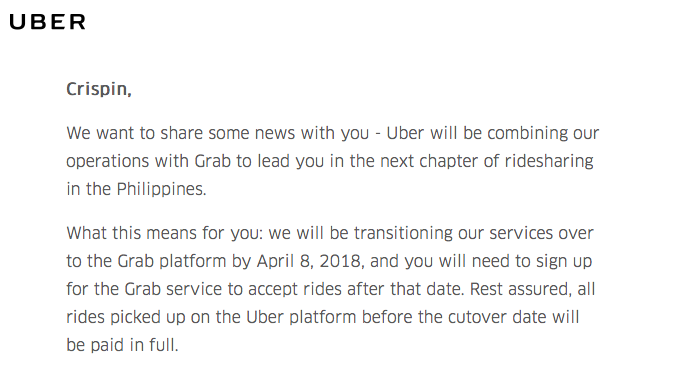 Pola del Monte, a 28-year-old editor in Quezon City, said this gives her no choice but to rely on Grab for ride-hailing services.

“I’m an Uber loyalist – largely by force of habit, but also because I prefer its sleeker interface, have had too many pleasant riding experiences, plus I find their customer service impeccable. I can count only one terrible experience but the response was über quick,” she said in a Facebook post.

“Those who use ride-hailing apps, like Uber and Grab, will be the losers in this deal. Commuters like me won’t be able to compare prices now. We won’t know if we are being priced unfairly. The government should do something about it,” she told Rappler in an interview.

Del Monte and Gonzales are just a couple of the ride-hailing app users in the Philippines who have expressed disappointment over the Uber-Grab deal.

In the Philippines, 3 companies – Uber, Grab, and U-Hop – are accredited to operate as transport network companies. But with the deal, the local competition will just be between Grab and U-Hop.

Philippine Competition Commission (PCC) Chairman Arsenio Balisacan said in a statement that no notification has been filed at the agency by Grab or Uber to date.

“If the parties meet the new threshold, they should notify the PCC within 30 days after signing of their definitive agreement,” Balisacan said.

Early this month, the PCC doubled the threshold for reviewing merger and acquisition (M&A) transactions in the country.

The PCC on March 5 published a memorandum, raising the thresholds to P5 billion for the value of assets or revenues of the parent entity, and P2 billion for the size of the transaction as defined in the implementing rules and regulations.

“If the transaction meets the new [thresholds], the parties do have to notify us and we have to review the transaction,” PCC Commissioner Johannes Bernabe said, echoing Balisacan’s statement.

For its part, the Land Transportation Franchising and Regulatory Board (LTFRB) said it will continue to regulate and monitor the fare structure for the benefit of the riding public.

A hearing is set for April 3 to tackle the proposed fare hike of Uber and Grab.

“As [for] trust issues, we have [the] PCC whose mandate is to check the same. We will be awaiting [the] manifestation to be filed by Uber to address the issues pending before the LTFRB,” the transport regulator said in a statement.

Grab earlier said a “dynamic surcharge” would continue to be applied based on several factors, including demand and supply at that particular point in time, traffic conditions, and estimated time for the journey.

With Uber moving out of the picture, the LTFRB said it would welcome new transport network companies as long as these are accredited.

“With the new guidelines right now, any new TNC is welcome as long as they are accredited by the LTFRB and they pass the necessary documents for their respective accounts,” the agency said. – Rappler.com