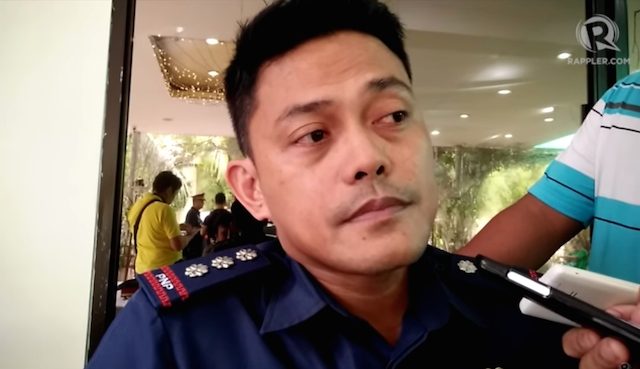 Facebook Twitter Copy URL
Copied
'The DOJ might be renamed Department of Injustice for this latest blunder?' asks Senior Superintendent Jonathan Cabal, after the Department of Justice cleared the prime suspect in the murder of Bien-Unido Mayor Gisela Bendong-Boniel

CEBU, Philippines – The lead investigator in the murder of Bien-Unido Mayor Gisela Bendong-Boniel called the Department of Justice (DOJ) resolution clearing the suspects in the case as “disturbing and alarming.”

Senior Superintendent Jonathan Cabal, former intelligence chief of the Police Regional Office (PRO-7) in Central Visayas, made the statement in a text message to this reporter on Monday, March 26, after the DOJ withdrew the parricide information filed against the late mayor’s husband, Bohol Board Member Rey Niño Boniel, the prime suspect in the case.

“I’m saddened by that resolution issued by Usec [Reynante] Orceo. Very disturbing to say the least,” said Cabal, who led the investigation of the alleged kidnapping and murder of Gisela in June last year.

He said a “plethora of evidence like CCTVs and other depositions” had been presented by the prosecution “only to be dismissed by an undersecretary who only read the petition by the defense and simply disregarded the panel of prosecutors of Lapu-Lapu who were circumspect in all angles and saw probable cause?”

“That is very alarming! The DOJ might be renamed Department of Injustice for this latest blunder?” Cabal added.

Prior to the latest DOJ resolution, the department came under fire for the recommendation of a DOJ panel of prosecutors to dismiss drug charges against alleged big-time drug lords Peter Lim and Kerwin Espinosa. Following public outrage over the decision, the DOJ ordered a review of the decision.

The suspect had confessed to the crime at PRO-7, “but pointed to the boatman as the gunman, which was an afterthought,” said Cabal, now acting chief of the PRO-7 logistics and research and development division.

“We have a cousin who incidentally was the boatman and pinpointed the board member as the one who killed his wife. We also retrieved the boat used in the commission of the crime with blood splatter and when subjected to DNA exam showed a remarkable 99.9 percent that of the mayor Gisela,” he added.

On Thursday, March 22, Justice Undersecretary Reynante Orceo signed the resolution for the withdrawal of the parricide information filed against Boniel.

“The City Prosecutor of Lapu-Lapu City is hereby directed to cause the withdrawal of the Information for Parricide filed against Niño Rey Boniel and the Information for Murder against Willy Hoylar and Restituto Magoncia Jr filed with the Regional Trial Court of Lapu-Lapu City and to report the action taken within ten days from receipt hereof,” the DOJ resolution said.

In a press conference in Cebu City on Friday, March 23, prosecution lawyer Armando Virgil Ligutan called the DOJ ruling a “temporary setback. He said the DOJ did not focus on the merits of the case, but on technicalities.

“What he (Orceo) is saying in his resolution is that it should be the Office of the Bohol Provincial Prosecutor that must take cognizance of the complaint,” Ligutan said.

The DOJ said in its resolution: “The killing, if found by the prosecutor’s office in Bohol to have been committed, could not be considered a separate crime. The kidnapping, which allegedly took place in Bohol, would be considered a necessary means to commit the murder. And since the investigation commenced in Bohol, it should take cognizance of the case.”

Lawyer Handel Lagunay, one of the prime suspect’s counsels, told Rappler that the board member will stay in jail despite the DOJ resolution.

“His ordeal is still not over,” Lagunay said, without elaborating.

Boniel is detained in a Cebu City jail, after the Supreme Court granted his request to be transferred there from Talibon, Bohol, in January 2018.

Meanwhile, Gisela’s remains had yet to be retrieved despite an extensive and months-long search by the police and volunteer divers.  (READ: Police not yet giving up on finding Bohol mayor’s dead body)

According to witnesses’ accounts, the mayor’s lifeless body was thrown into the sea off Lapu-Lapu City, Cebu, after her husband allegedly shot her. – Rappler.com