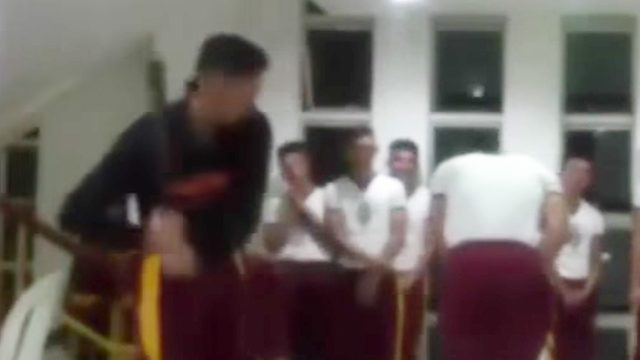 Facebook Twitter Copy URL
Copied
But the Philippine National Police says it will not initiate a criminal investigation into a PNP Academy beating that supposedly happened in 2017, adding that the Philippine Public Safety College should start the probe

This was announced by PNP Spokesperson Chief Superintendent John Bulalacao on Wednesday, March 28, after he was shown a video clip of a PNPA beating that supposedly happened in 2017. (EXCLUSIVE: Video in 2017 shows beating at PNP Academy)

“If this incident is true, the PNP will not tolerate it as this violates the anti-hazing law,” Bulalacao told Rappler in a text message.

“What is shown in the video is pure and simple maltreatment activity which is violative of the anti-hazing law,” he added.

Will the PNP pursue a probe? Despite the video pointing to a criminal act, the PNP will not initiate a criminal investigation.

According to Bulalacao, the Philippine Public Safety College (PPSC) “should initiate the investigation” because the PNPA is its component.

“The PNP will help particularly in the gathering of evidence and filing of the case,” Bulalacao said.

There’s an ongoing probe now on another beating incident – the 2018 PNPA graduation mauling, which sent 6 fresh academy graduates to the hospital with contusions and lacerations.

Two victims decided to file a criminal complaint with Silang town police, which has the PNPA under its jurisdiction. They filed physical injury raps against 9 underclassmen belonging to the PNPA Batch 2019.

One of the two complainants, Police Inspector Ylam Lambenecio, was spotted in the 2017 beating. Lambenecio was identified by a source as one of the cadets giving the blows. – Rappler.com