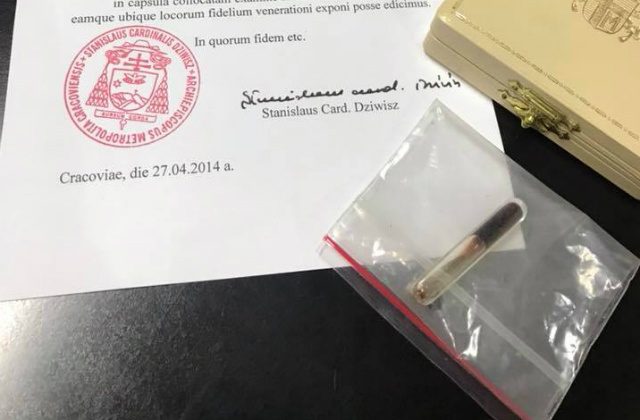 Facebook Twitter Copy URL
Copied
'This is the first-ever blood relic of the great Pope still in liquid form stored in a glass container here in our country,' says the Manila Cathedral

MANILA, Philippines – The Manila Cathedral is set to display the blood relic of the late Pope John Paul II on Saturday, April 7, in a ritual that aims to inspire Catholics to imitate his path to God.

The Manila Cathedral will present the blood relic for public veneration on Saturday, with a Mass to be led by Manila Archbishop Luis Antonio Cardinal Tagle at 9 am on the same day.

“This is the first-ever blood relic of the great Pope still in liquid form stored in a glass container here in our country,” the Manila Cathedral said in its announcement.

“Let us come together as we welcome home the presence of our beloved Pope John Paul II and receive the graces and miracles through his powerful intercession!” the cathedral’s announcement also said.

Tagle himself invited Catholics to this public veneration, through a 3-minute Facebook video that had Tell the World of His Love, the iconic song during John Paul II’s 1995 trip to Manila, playing in the background.

“Darating po siya muli (He is coming back),” Tagle said, alluding to John Paul II’s trips to the Philippines in 1981 and 1995, when he led the World Youth Day in Manila.

In an interview with the Catholic News Agency, Father Carlos Martins, a priest who handles relics, explained the spiritual significance of religious artifacts like these.

Martins said: “I think that Saint Jerome put it best when he said: ‘We do not worship relics, we do not adore them, for fear that we should bow down to the creature rather than to the creator. But we venerate the relics of the martyrs in order the better to adore him whose martyrs they are.’ We venerate relics only for the sake of worshipping God.” – Rappler.com