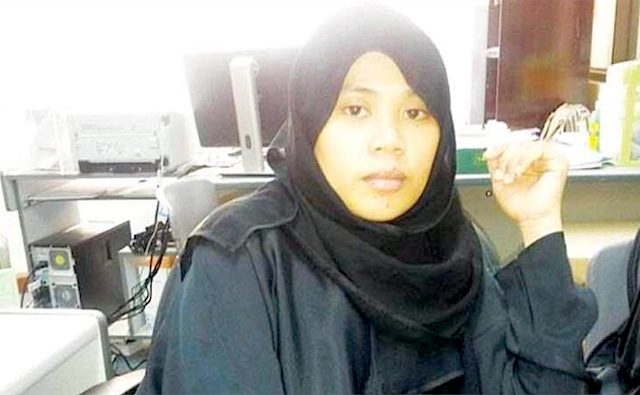 ACTS-OFW Representative Aniceto Bertiz III said in a news briefing on Wednesday that Saudi Ambassador to the Philippines Dr Abdullah Bin Nasser Al-Bussairy relayed the good news to him in a phone call.

“[He] informed me that Fahima can now leave Riyadh and come home anytime,” Bertiz said.

He credited Alagasi’s homecoming to President Rodrigo Duterte, who raised the OFW’s case to Saudi Interior Minister Prince Abdulaziz bin Saud bin Naif when he paid a courtesy call on the Philippine leader in Malacañang in March.

The 26-year-old Alagasi was only 22 when she accidentally dropped the lid of a Thermos bottle filled with hot water while preparing coffee for her employer. This annoyed her female employer, who poured the contents of the container all over her body.

Alagasi sought treatment for her second-degree burn injuries on her neck, a large part of her back, and her thighs. She ran away from her employer while she was undergoing treatment at the Raseel Medical Center, and sought refuge at a Philippine embassy shelter run in Riyadh.

The employer elevated the case to the appeals court and also filed an absconding case against Alagasi. These cases held back the OFW’s repatriation for 4 years.

Bertiz said the Saudi ambassador told him that the employer’s retaliatory cases against Alagasi “have been resolved through the intercession of Saudi Prince and Interior Minister Abdulaziz bin Saud bin Naif soon after his official visit to the President in Malacañang.”

The lawmaker described Alagasi’s repatriation as a “heartwarming gesture” of the Saudi minister to Duterte.

“We thank President Duterte and the Saudi Prince for intervening in this case. Without their help, Fahima’s dream of seeing her children would have been impossible,” Bertiz said. – Rappler.com