PH military will have new chief on April 18 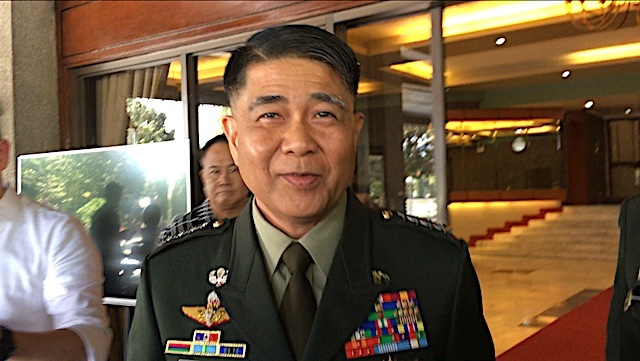 Defense Secretary Delfin Lorenzana said the list came from the Board of Generals which met earlier this week. He didn’t name the 5 generals on the list.

Lorenzana said the change of command ceremony will be held on April 18 or 6 days before Guerrero’s scheduled retirement on April 24.

“[The President] may approve the designation of the new Chief of Staff of the AFP not later than end of next week. Change of command is on April 18,” Lorenzana said on Wednesday, April 4.

Lorenzana said Duterte will be busy on the week of April 24.

Guerrero was originally supposed to retire on December 17, 2017 but his term was extended for 4 months. He is expected to lead the Maritime Industry Authority (Marina) after his retirement.

Lorenzana previously named 3 mistahs from the Philippine Military Academy Class of 1985 as among the contenders for the post.

Not all nominees are from PMA Class of 1985, Lorenzana said. – Rappler.com