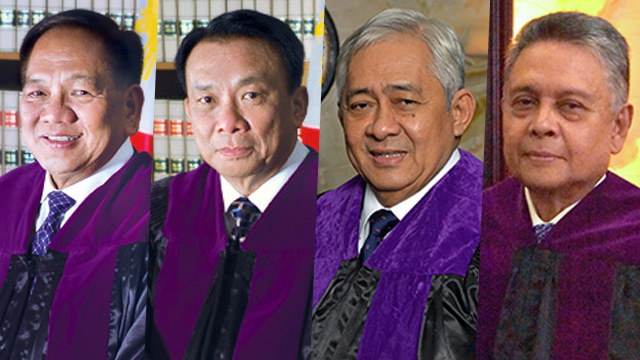 MANILA, Philippines – Chief Justice Maria Lourdes Sereno wants 4 Supreme Court justices to inhibit themselves from the quo warranto petition filed against her by the Office of the Solicitor General, saying they cannot decide on the matter “objectively and impartially.”

The Chief Justice, through her lawyers, filed 4 separate motions before the High Court for Associate Justices Diosdado Peralta, Lucas Bersamin, Francis Jardeleza, and Noel Tijam to inhibit themselves from the quo warranto proceedings, Sereno’s camp said in a statement on Thursday, April 5.

“All of them testified against the Chief Justice in her impeachment case pending before the House of Representatives and actively participated in the so-called ‘RedMonday’ protest in the SC that called for her resignation,” Sereno’s lawyers said in a statement.

Sereno’s lawyers said that in her motions, the Chief Justice said “her constitutional right to due process would be violated if the justices who publicly criticized her in the impeachment hearings and supported calls for her resignation are allowed to participate in the deliberation of the quo warranto case.”

She also strongly believes that the 4 justices “cannot decide the quo warranto petition objectively and impartially.”

“Due process of law requires a hearing before an impartial and disinterested tribunal, and that every litigant is entitled to nothing less than the cold neutrality of an impartial judge,” Sereno said, citing Article III, Section 1 of the 1987 Constitution.

“The Chief Justice said that Peralta, Jardeleza, and Tijam must be excluded from the quo warranto case for showing ‘actual bias’ against her,” the lawyers said.

Sereno said that during the impeachment hearings of the House committee on justice, Peralta testified that she should have been disqualified as a candidate for chief justice for failing to submit to the Judicial and Bar Council (JBC) her Statements of Assets, Liabilities and Net Worth for the years she worked as a professor at the University of the Philippines.

The Chief Justice said Peralta’s bias apparently stemmed from his belief that she was the one who decided to exclude his wife, Court of Appeals Associate Justice Fernanda Lampas Peralta, from the list of applicants for CA presiding justice in 2017. She said Peralta himself admitted this in at least two impeachment hearings.

“The Chief Justice has good reason to believe that he (Peralta) may have prejudged the merits of the quo warranto petition and that he may already have formed an opinion that the Chief Justice should have been disqualified to be nominated as Chief Justice,” Sereno said in her 14-page motion seeking to inhibit Peralta from the case.

Her lawyers said Sereno also argued that Peralta, as then acting ex-officio chair of the JBC when she was nominated for the top post, “would have personal knowledge of disputed evidentiary facts concerning the quo warranto proceeding.”

“[He] served as a material witness in the matter in controversy,” Sereno said.

The Chief Justice claimed Jardeleza showed bias against her when he testified before the House panel that Sereno allegedly manipulated a 2014 JBC shortlist for SC justice to exclude him.

“There is reasonable basis to conclude from Justice Jardeleza’s testimony that he harbored ill feelings towards the Chief Justice as a consequence of the latter’s challenge to his integrity during the nomination process for the Associate Justice position (vice Hon. Justice Roberto A. Abad) in 2014,” Sereno said in her 18-page motion for Jardeleza’s recusal.

The Chief Justice also cited how Jardeleza, during the impeachment hearings, characterized her actions in the nomination process as “inhumane” and “not of a normal person.” (READ: Jardeleza accuses Sereno of treason)

“With due respect, this apparent prejudice against the Chief Justice renders Justice Jardeleza disqualified to  hear and decide the instant petition,” Sereno said in her motion.

In the case of Tijam, Sereno cited a news report where he was quoted as saying,  “If Chief Justice Sereno continues to ignore and continues to refuse to participate in the impeachment process, ergo, she is clearly liable for culpable violation of the Constitution.” Tijam confirmed he said this when he testified before the House panel.

The Chief Justice said Bersamin “exhibited bias and animosity” towards her when he alluded to her as a “dictator” while criticizing Sereno’s leadership style before the House panel.

In her motions, Sereno clarified that her motions for the 4 justices to inhibit from the case was without prejudice to her contention that the High Court has no jurisdiction over the quo warranto case.

The High Court will hold oral arguments on the quo warranto petition in Baguio City on April 11, which Sereno will attend . – Rappler.com