The consistency and ironies of Justice Sereno 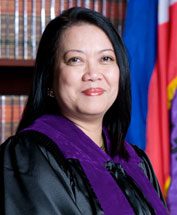 MANILA, Philippines – In 2003, the scythe of impeachment hanged over Chief Justice Hilario Davide. He was accused by congresspersons from the Nationalist People’s Coalition of misusing the Judiciary Development Fund. One of those who defended him was then UP professor Lourdes Sereno.

Sereno led an independent audit of the JDF with a team of accountants and lawyers. She said that her group’s findings showed there was no irregularity in the way Davide spent the JDF.

80% of the JDF, sourced from fees paid by litigants in filing cases, is allotted for the cost of living allowances of court employees; the 20% is used for the physical improvement of the courts.

Representatives Gilbert Teodoro and William Felix Fuentebella said, however, that Davide didn’t follow the 80-20 formula, adding that employees complained that what should be given to them was instead used to purchase expensive curtains and to build cottages in Baguio, among others.

Sereno said the allegations were “exaggerated.” She said the impeachment case against Davide was politically-driven, as the SC was about to decide on a coco levy case involving tycoon and NPC chairman Eduardo ‘Danding’ Cojuangco. Teodoro is Cojuangco’s nephew.

The UP professor went on to join an anti-impeachment coalition composed of members from lawyer’s groups and civil society organizations. One of those who joined the said coalition (he asked not to be named because of his work) said Sereno served as a resource speaker. “She explained to us the legal background of the impeachment, the underlying context.”

Sereno wanted the SC to exercise its power and act on petitions asking the High Court to stop the impeachment proceedings, adding impeachment should not be used carelessly.

Nine years later, Sereno would be asked to testify in an impeachment trial against the present leader of the Court, Chief Justice Renato Corona. She would decline after the prosecution decided to rest its case, but Sereno’s dissenting opinion served as ammunition enough against Corona.

She also dissented against a ruling of the Court that bars justices and court employees from testifying before the impeachment trial and divulging internal deliberations of the High Court in the name of judicial privilege.

“The injury to society would indeed be greater if the Court upholds unconditionally the judicial privilege against all inquiries on its adjudicatory processes and denies outright the powers of the Impeachment Court to determine the truth and the public’s demand for accountability of impeachable judicial officers,” she wrote.

Sereno was a UP law professor during the time of the impeachment case against Davide, with an expertise on international economic law. Now, she is one of the 15 magistrates in the highest court of the land, and is Aquino’s first appointee to the Court.

She is part of the minority who has dissented in cases involving former President Gloria Macapagal-Arroyo and her allies. Corona did not hide his dislike for her, saying her “arrival to the Honorable Court has signaled a new period of difficulty and embarrassment” for him.

But while she holds a different view on the 2 impeachment cases, Sereno’s stand on the disclosure of foreign currency accounts remains the same. She said in 2001 that the accounts should not be kept secret when accountability demands them to be opened to the public.

Columnist Belinda Oliveros-Cunanan, in her column, “Tidbits” in the Philippine Daily Inquirer, said Sereno disagreed with the claim of Juan de Zuñiga, lawyer of Bangko Sentral ng Pilipinas, that dollar deposits could not be looked into under Presidential Decree 1246. PD 1246 guarantees the confidentiality of foreign currency bank accounts for non-residents.

BP 180, she said, has already superseded PD 1246. BP 180 allows inquiry into foreign currency deposits to help investigations into unexplained wealth. 11 years after, as an SC justice, she would reiterate the same stand in a dissenting opinion on a case stopping PSBank from disclosing Corona’s dollar bank deposits. She said that dollar bank deposits should be disclosed if the impeachment trial deems it necessary.

“In the scale of constitutional values, nothing can be higher than the requirement of public accountability,” she wrote in her dissenting opinion in February 2012.

Also in the name of accountability, Sereno has gone against the tradition of confidentiality in the Court. She detailed the internal deliberations of the SC on Arroyo’s petition for a temporary restraining order, saying the voting was not accurately reflected in the resolution issued by the High Court.

She also released a summary of her 2009 and 2010 Statement of Assets, Liabilities and Net Worth, along with Justice Antonio Carpio. The summary said she has assets worth P17-M.

Samar Rep Ben Evardone, however, told the The Daily Tribune that he would consider filing an impeachment case against Sereno after the paper reported she did not disclose P25-M worth of earnings from being part of the government’s legal team that arbitrated the case of the Philippine International Airport Terminals Co. in the International Chamber of Commerce in Singapore and Washington. Evardone is a member of Liberal Party, Aquino’s political party.

The Daily Tribune cited an affidavit executed by Edgar Dimayuga, Director lV of the Financial Management Service of the Office of the Solicitor General which showed that legal fees for Sereno for her work in the Singapore case reached $312,619.54, or P13.4-M and another $254,000 (P10.9-M) for the Washington ICC.

In an interview with Sunstar Davao, the lady justice said that the judiciary must aspire for transparency. She added that the judiciary should secure the support of the people or else it “underutilizes its potential to be a strong stabilizing force and a platform for national development.”

When she was appointed to the SC, Sereno said that she wants the judiciary to strive for independence, free from any political influence. She has ruffled not a few feathers though, for being assertive and for speaking out her mind.

Dean Antonio La Viña of the Ateneo School of Government, one of Sereno’s students in UP, said Sereno has always been strong and independent-minded.

In fact, he said that Sereno would have testified in the impeachment trial; the prosecution, however, had already rested its case. “She will not shrink from appearing in the impeachment court, no matter the consequences, if she thinks it is the right thing,” La Viña said.

Lawyer Tanya Lat, who used to work with Sereno at the AIM Policy Center, said her former boss is “mindful of the broader policy considerations and seeks to uphold public interest.”

“She is not afraid to speak out in defense of what is right and what is true and to take a principled stand on issues,” she said. – Rappler.com