Is the government prepared for Boracay’s closure? 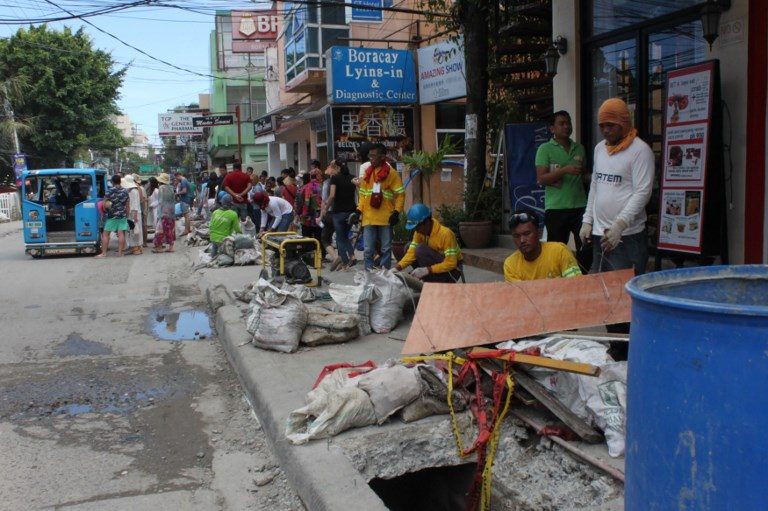 Facebook Twitter Copy URL
Copied
The labor department says it can only hire 5,000 of the 17,000 workers to be affected by the closure

MANILA, Philippines – With only a few days left before the closure of Boracay, many business owners in the key tourist destination are scrambling for an alternative revenue stream in the coming months.

Among them is souvenir shop owner Melodee Nova, who broke down in tears when she heard that President Rodrigo Duterte approved the recommendation to shut down Boracay.

(When I heard the news, there was such a heavy feeling in my chest. I kept on crying because the closure is not a small thing. I have a family.)

Nova feels the closure is “unfair” to small business owners like her since there was no consultation with stakeholders. She said the government could have drawn plans to fix the environmental problems of the island without closing it down entirely.

While big establishments can afford the months-long closure, it’s a different story for small business people who do not have huge capital, Nova said.

“Not all businesses here are like Shangri-La or SM that will not feel the impact of the closure. Many of us here are part of the middle class whose earnings are not comparable to big business. A little consideration for us would have been appreciated,” she said.

Nova is among those who lost their stores in the huge fire that hit Boracay’s popular D’Talipapa-Boracay in Sitio Manggayad in September 2017. She has not yet recovered her losses from that fire.

Now, Nova said she would have to keep only two of her 6 employees and sell her merchandise elsewhere to make ends meet in the coming months.

“With little time left for us to prepare, of course we had to source from our savings so we can pay our suppliers. Sana man lang pinatapos ‘yung Laboracay (They could have waited for Laboracay to be over),” she said, sharing the sentiment of other business owners and workers in Boracay, and some people in the Duterte Cabinet as well, that the closure should have been done during the lean months.

The closure order will proceed, as ordered by the President, on April 26, just before Laboracay – the annual Labor Day event that draws thousands of tourists.

With less than 3 weeks before the closure, the government has yet to divulge its detailed action plan on the shutdown, which was supposed to have been tackled during the Cabinet meeting on Wednesday, April 4. It was during the meeting when Duterte approved the recommended 6-month closure.

In a phone interview with Rappler, Labor Undersecretary Joel Maglunsod said the Department of Labor and Employment (DOLE) has already completed profiling workers who will be affected by the closure.

Maglunsod said DOLE will implement livelihood programs and provide assistance through the Tulong Panghanapbuhay sa Ating Disadvantaged/Displaced (Tupad) Workers program, which has a P2.3-billion budget for 2018.

The Tupad program seeks to provide assistance to laid-off or retrenched workers, and for self-employed workers whose livelihoods have been damaged by disasters and other crises.

Maglunsod said, however, that DOLE funds will not be enough. Of the total 17,735 workers to be affected by the Boracay closure, DOLE can only afford to provide emergency employment to some 5,000 workers.

“The government will need millions [of pesos] for this. Well, DOLE is not the only agency here. It is an inter-agency effort,” he said in a mix of English and Filipino.

Some senators have hit the executive branch for the “lack of a concrete plan” for Boracay workers who would have no means of livelihood for the duration of the closure. (READ: CHEAT SHEET: What to expect from Boracay closure)

Senator Joel Villanueva and Senator Nancy Binay, Senate committee chairpersons on labor and tourism respectively, said they expected the government to have a more detailed plan prior to the implementation of the closure order.

“The goal should be to mitigate the impact brought [by] job displacements, by providing those who are working in the primary, secondary, and tertiary economic sectors a clearer plan for them before the proposed shutdown,” Binay said in a statement.

Stakeholders also pointed out the “haze of uncertainty” looming over the closure. Boracay Foundation Incorporated said it is “confused, just as everyone else,” and asked the government to address the uncertainties on livelihood, security, and assistance to displaced workers and families before the closure.

The Department of Social Welfare and Development (DSWD), for its part, said it is “still preparing” its plan, which includes determining how many people would need its help.

“We are still preparing the plan. At present, we are in the stage of determining how many people will exactly need our help. DSWD programs and services such as Sustainable Livelihood Program, Cash-for-Work, and Assistance to Individuals in Crisis can be accessed by affected families,” the DSWD said in a statement sent to Rappler.

The DSWD will also have to deal with the possibility that some of the Pantawid Pamilyang Pilipino Program (4Ps) beneficiaries in Boracay would become homeless once the rehabilitation program begins.

The DSWD urged 4Ps beneficiaries in Boracay to ask the local government not to demolish their homes which are built within the 30-meter shoreline easement.

“We also want our Pantawid beneficiaries to negotiate with the LGU not to push through with the demolition because they will lose their rooms and they have nowhere to go,” the DSWD added.

Duterte earlier said he would declare a state of calamity in Boracay, which would fast-track rehabilitation efforts in the island, and would allow access to calamity funds to help address the needs of those to be displaced. (READ: Villanueva urges DENR to declare Boracay as ‘critical’ area)

But Villanueva pointed out that the calamity funds for the year, amounting to P19.6 billion, would not be enough to cushion the impact of the shutdown.

“The calamity funds will not be enough to address all the problems that our workers and their families will face because of the Boracay shutdown. We need to allocate [additional] funds for this,” Villanueva said in Filipino.

The DILG has yet to respond as of posting.

As the government maps out its action plan for Boracay, stakeholders like Nova had a few practical questions that others may be asking as well: “Will government assistance be enough for the laid-off workers to eat 3 times a day or send their children to school? What about women workers? I don’t think they will be employed for manual labor.”

For now, Nova and everybody else dependent on Boracay tourism will just have to wait and see. – Rappler.com