Facebook Twitter Copy URL
Copied
The public veneration of the blood relic at the Manila Cathedral lasts until 8 pm on Saturday, April 7, and resumes from 6 am to 8 pm on Sunday, April 8

MANILA, Philippines – Thousands of Catholics honored the relic of the blood of Pope Saint John Paul II at the Manila Cathedral on Saturday, April 7, with this public veneration set to continue until Sunday, April 8.

Malicdem, who is also Tagle’s private secretary, said around 2,500 people packed the 2,000-seater Manila Cathedral during Saturday’s Mass. Hundreds of others arrived and will arrive at the Manila Cathedral to view the blood relic of the late pontiff.

The public veneration lasts until 8 pm on Saturday, and resumes from 6 am to 8 pm on Sunday. 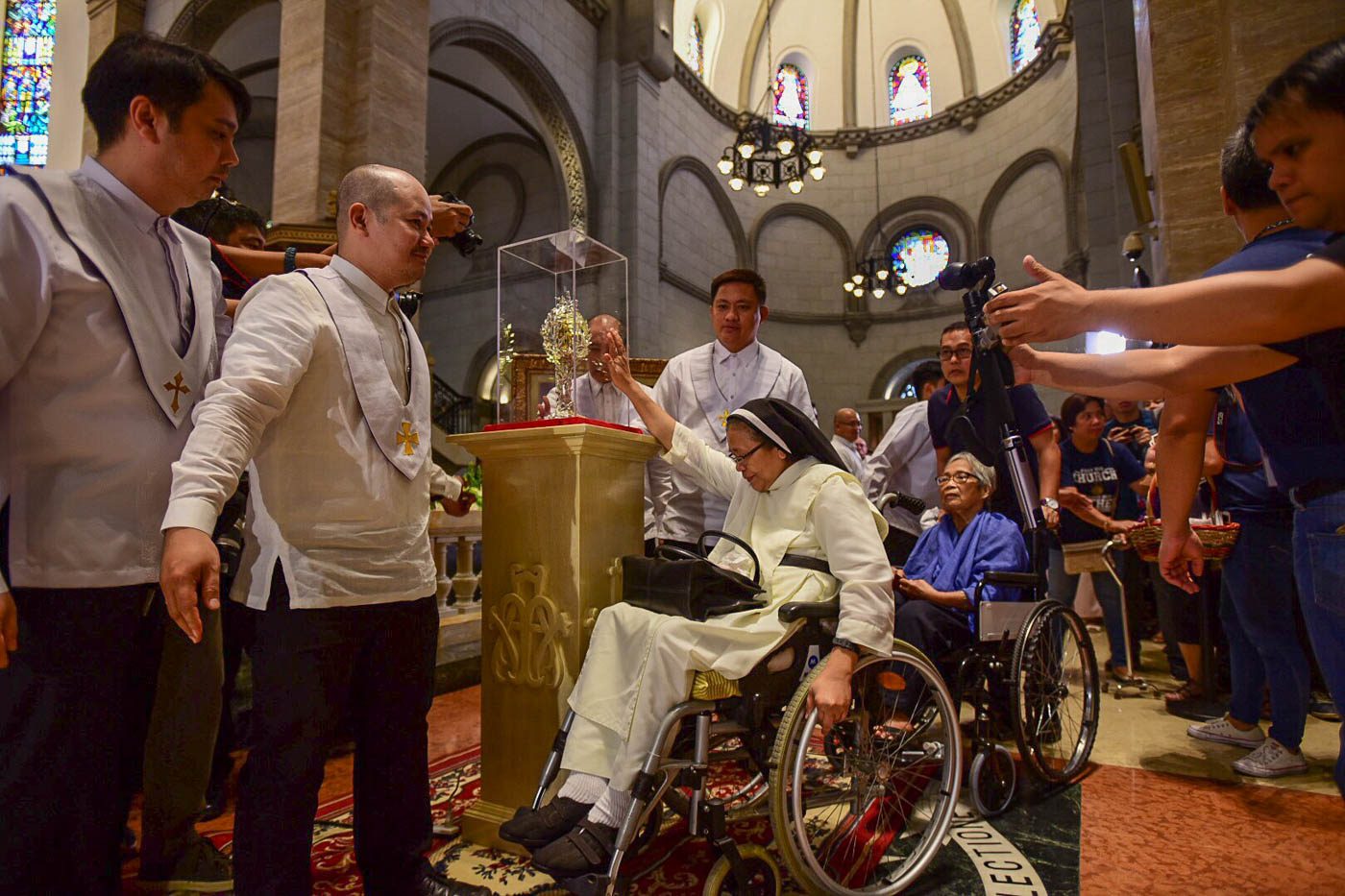 In his homily, Tagle reminded Catholics that the news of Jesus’ resurrection from the dead was first spread by witnesses from among the “simple people” – not experts, scientists, or “so-called knowledgeable people.”

“My dear brothers and sisters, the Risen Lord wants to meet us, to open our eyes. He wants to encounter us, and when you have seen him, go, tell the Good News. Tell the Good News to those who are suffering, those who live in darkness, those who have remained in their tombs of despair,” Tagle said. Tagle then described the late John Paul II as “one of the great witnesses of the Risen Lord.”

‘We welcome him again’

“Pope John Paul II came to us. He opened his heart. The Philippines is always welcome in his heart. Now we welcome him again – the relic of blood. Blood. Life. The life connection continues, but it is life in Christ,” Tagle said.

“With Saint Pope John Paul II, let us be witnesses of Jesus to the ends of the earth,” the cardinal said. “Towards the end of Pope John Paul II’s life, with complications from Parkinson’s disease, doctors extracted blood from him in case of an emergency transfusion. There are 4 vials of blood that were never used. Two of the vials were held at Bambino Gesu Children’s Hospital in Rome, and the other two were given to Pope John Paul II’s personal secretary, then Archbishop Stanislaw Dziwisz,” said a statement from the Manila Cathedral. “The blood is in a liquid state because of an anti-coagulant substance present in the test tubes at the moment of extraction,” the Manila Cathedral statement added.

Seven vials of this liquid blood have been enshrined in different churches worldwide, including the Manila Cathedral. In an interview with the Catholic News Agency, Father Carlos Martins, a priest who handles relics, explained the spiritual significance of religious artifacts like these.

“I think that Saint Jerome put it best when he said: ‘We do not worship relics, we do not adore them, for fear that we should bow down to the creature rather than to the creator. But we venerate the relics of the martyrs in order the better to adore him whose martyrs they are.’ We venerate relics only for the sake of worshipping God,” Martins said. – Rappler.com