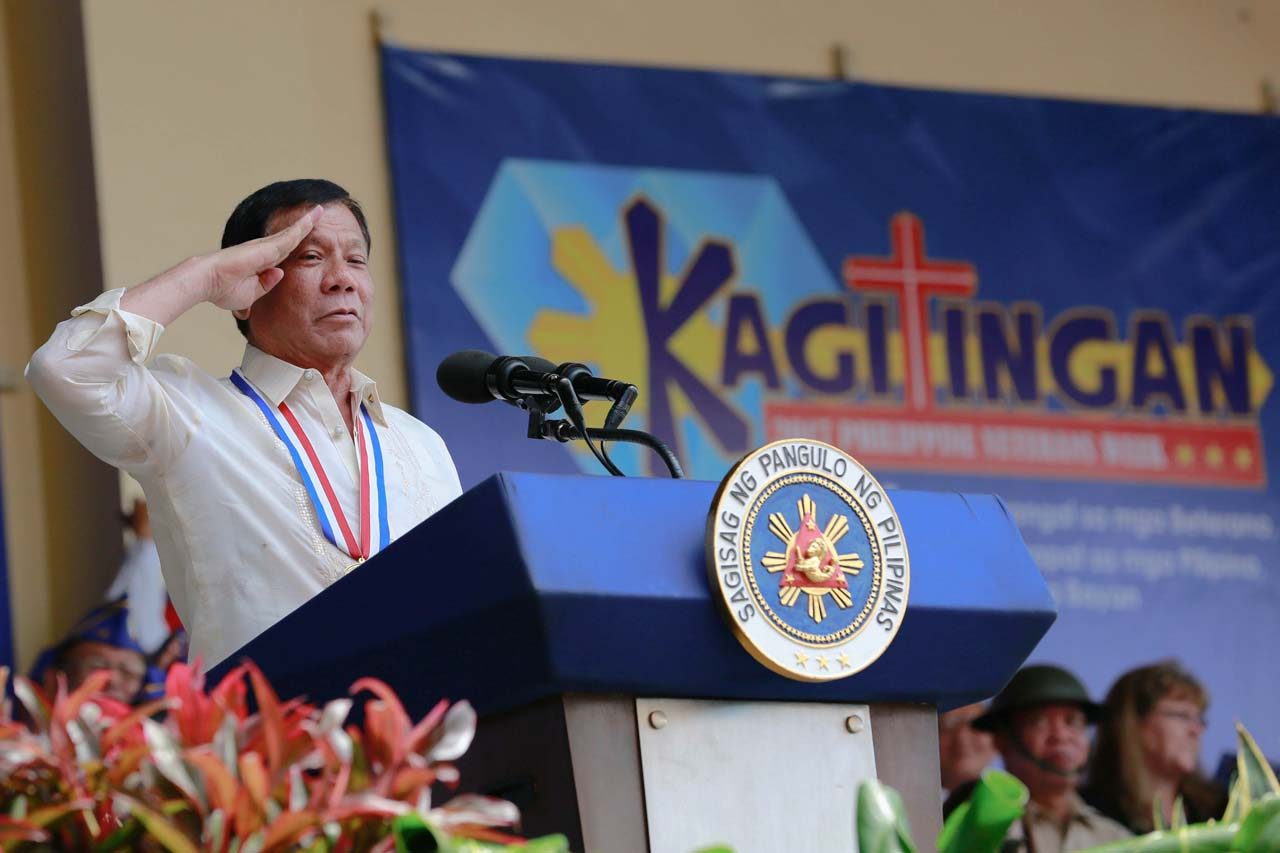 Facebook Twitter Copy URL
Copied
(UPDATED) 'Forces who wish to see a weak and submissive Philippines continue in their unbridled disrespect for the institutions and laws that embody our aspirations as a people,' says President Rodrigo Duterte on the 76th Day of Valor

MANILA, Philippines (UPDATED) – Marking the Day of Valor, President Rodrigo Duterte on Monday, April 9, called on Filipinos to “defend the honor of our motherland” as the freedoms that their heroes fought for “are once again imperiled.”

The 76th Day of Valor, or Araw ng Kagitingan, commemorates the Fall of Bataan in the Philippines during World War II. It also highlights the bravery of Filipino soldiers against invading Japanese forces. (READ: FAST FACTS: Araw ng Kagitingan)

In his message, Duterte pointed out that “immeasurable sweat, blood, and tears were shed, and countless lives were lost, during this dark chapter in our history.”

“It is thus disquieting that our commemoration of this historic occasion comes at a time when the very freedoms that the heroes of Bataan fought for are once again imperiled,” Duterte said.

The President, who previously said democracy and human rights make it hard for him to run the Philippines, warned about groups that “disrespect” democratic institutions.

“Forces who wish to see a weak and submissive Philippines continue in their unbridled disrespect for the institutions and laws that embody our aspirations as a people,” he said.

This comes as the rule of law in the Philippines deteriorated significantly under the Duterte administration, according to the newly-released World Justice Project Rule of Law Index. From 70th in 2016, the Philippines now ranks 88th out of 113 countries in 2017.

The Economist Intelligence Unit (EIU) Democracy Index, meanwhile, placed the Philippines in the 51st spot out of more than 160 countries in 2017 from its 50th spot in 2016.

April 9 also commemorates the Bataan Death March. Of the 78,000 Filipino and American troops who surrendered, 5,000 to 10,000 Filipino soldiers and around 650 American soldiers died along the way.

In a separate statement, Senator Grace Poe urged Filipinos to remain grateful to Filipino veterans and continue what they’ve started.

She also highlighted the people fighting not enemies in the battlefield “but hunger, poverty, homelessness, ignorance, greed, and injustice.”

“History calls upon us to live out the same courage and bravery of our forefathers by doing our duties as channels of peace, builders of society, movers of economy, and generators of ideas,” Poe said.

Senator Sonny Angara echoed this sentiment, saying: “The sacrifices of our forefathers will not be in vain if we continue what they have started. Now is our turn to carry on the task and be heroes like them even in our own little ways.”

“Rizal, Bonifacio, and Ninoy Aquino are not the only icons of courage. Every Filipino who offers blood, tears, and sweat, strength, joy, and taxes, is brave. All Filipinos who fight against oppression and right the wrong are valiant,” said Pangilinan.

The minority senator then took a swipe at the Duterte administration, saying: “The killing of drug suspects is wrong, the imprisonment of Senator Leila de Lima is wrong, misogyny is wrong, giving away Philippine islands is wrong, having zero NFA rice stocks is wrong, and many more.”

De Lima, for her part, also called on Filipinos to unite and take action against injustice.

(Rhetoric on love of country would be useless if one pushes for the killing of thousands of Filipinos, especially the innocent and the defenseless. There is nothing patriotic about surrendering the Philippines’ honor and territory to another country.)

Senator Joel Villanueva, meanwhile, said that Araw ng Kagitingan should serve as a reminder for Filipinos to be “brave and courageous amidst oppressors.”

“Our veteran soldiers withstood hunger, thirst, and fatigue to walk the Death March,” he said. “This is proof that the Filipino spirit does not falter in the face of struggle.”

The League of Filipino Students (LFS) Northern Mindanao, in its statement commemorating April 9, encouraged Filipinos to go beyond remembering our history and instead to live and continue the fight.

The group also called for the immediate release of political prisoners “who had been justly fighting – armed or unarmed – for our nation, and now who suffer in the hands of this fascist government.”

“We give our high respects to all of the Filipino people [who continue] to fight, who resist against dictatorship, tyranny, and foreign domination.” – Rappler.com