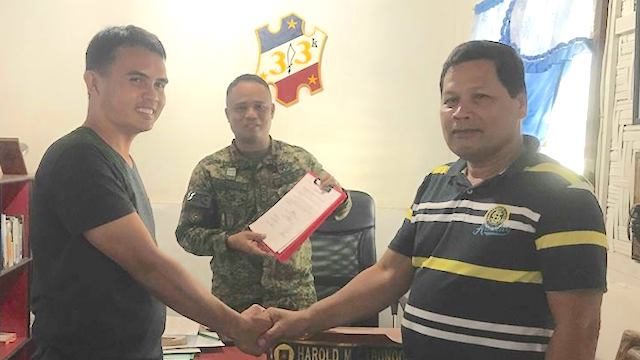 MANILA, Philippines – A handshake and a boodle fight ended a years-long land dispute between two families in Central Mindanao on Monday, April 9, thanks to the intervention of a battalion commander.

Chiefs of two neighboring barangays, one in Sultan Kudarat and another in Maguindanao, vowed to end violence that has killed at least 5 of their family members and to keep the peace in their turfs.

They signed an agreement and shook hands before Lieutenant Colonel Harold Cabunoc, commander of the Philippine Army 33rd Infantry Battalion (IB) based in Sultan Kudarat, who facilitated talks between the two barangay chiefs.

Cabunoc said it is important to understand and address the root causes of clan conflicts.

In the case of the Baumol-Kautin conflict, Cabunoc said the dispute started over a decade ago when the late Baumol patriarch brought his family and followers to Barangay Lambayong and apparently occupied parts of the land owned by the Kautin clan.

Baumol’s willingness to return the land was key in the settlement of the land dispute.

The signing ceremony was followed by a boodle fight.

Cabunoc said the problem also needs a “political solution” so the peace can be sustained. Parts of Barangay Lambayong occupied by the Baumol family are being claimed by the municipality of General Salipada K. Pendatun.

“There should be a joint session between the two provinces (Sultan Kudarat and Maguindanao) that must be attended by concerned municipal and barangay officials to agree on the political boundaries,” said Cabunoc.

The Baumol clan prefers to remain in Sultan Kudarat. Cabunoc said he is working to settle another dispute between two families in Sultan Kudarat.

He added that the families should know he will not hesitate to use force against those who will cause problems in their communities.