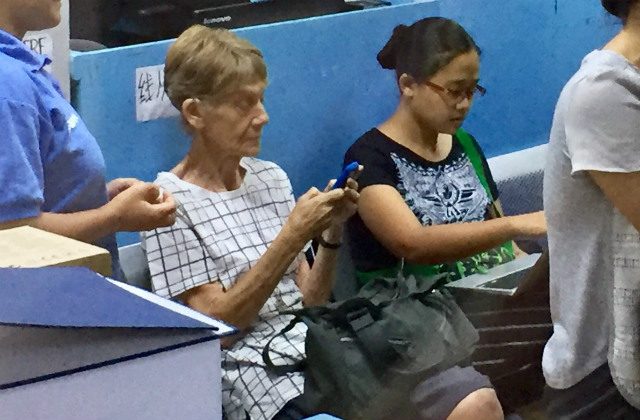 Facebook Twitter Copy URL
Copied
Detained Sister Patricia Fox, 71, is a missionary with the Sisters of Our Lady of Sion, and has worked in the Philippines for 27 years, says CBCP News

CBCP News said Fox is a missionary with the Sisters of Our Lady of Sion, and has worked in the Philippines for 27 years.

“I’ve been in and out of the country several times but I’ve never been questioned. The immigration bureau has not said anything on what to do with my missionary visa,” said Fox, as quoted by CBCP News.

The nun who belongs to the Sisters of Our Lady of Sion in the Philippines is Sister Patricia Fox, not Cox, according to the Catholic Directory on the Claretian Publications website.

“We confirm the apprehension of Patricia Cox pursuant to a Mission Order issued by Commissioner Jaime Morente. We await completion of the investigation before we issue our official statement. Thank you,” said Mangrobang in a text message on Monday evening.

Mangrobang said the nun was apprehended at around 2 pm on Monday.

Fox said 6 BI officials arrested her at their mission house in Quezon City at around 2:15 pm on Monday, CBCP News reported. She is now detained at the BI intelligence division in Intramuros, Manila.

CBCP News also said Fox had been detained in 2013 “for joining protests in Hacienda Luisita, but was released without charges.”

This comes after the Philippine government on Sunday, April 15, blocked an official of the Party of European Socialists from entering the Philippines. A slip issued by the BI showed that the EU political party official, Giacomo Filibeck, was part of a “black list order.”

Akbayan Representative Tom Villarin slammed the Duterte administration for Filibeck’s “shameful” deportation, saying that it shows “how paranoid this government is in keeping the rest of the world blind from the damage President Duterte has done to our country.” – Rappler.com