Evasco out as NFA Council chairman 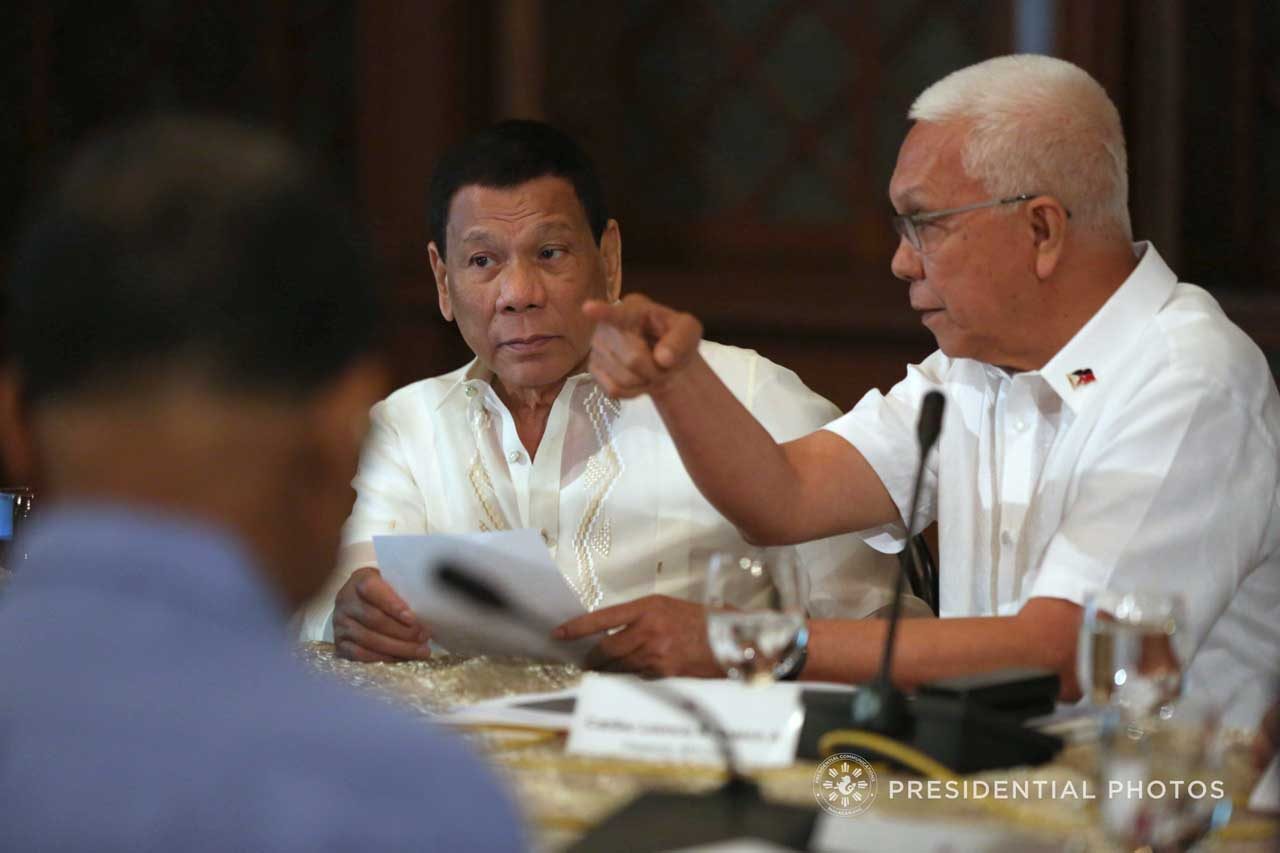 Facebook Twitter Copy URL
Copied
(UPDATED) The removal of Cabinet Secretary Leoncio Evasco Jr from the National Food Authority Council is a 'loss in our fight against corruption in the importation and management of rice,' says Senator Bam Aquino

Presidential Spokesperson Harry Roque confirmed this in a press briefing in Boracay on Tuesday, hours after he announced the transfer of the supervision of agencies, including the NFA, from Evasco’s office to the Department of Agriculture.

He said Evasco’s loss of membership is a logical consequence of the NFA transfer to DA.

“Since the NFA is again an attached agency of the DA, there is no need for the Office of the President to be in the Council,” said Roque.

Agriculture Secretary Manny Piñol confirmed that he is the new chair of the NFA Council, since the NFA is now under DA supervision.

While the Palace confirmation came on Tuesday, the decision had been made before Evasco and Duterte’s one-on-one meeting in Malacañang on Monday evening, April 16.

In fact, members of the “reorganized NFA Council” held a meeting with Duterte on Monday, according to a Facebook post of Piñol. Evasco was not present at the meeting.

This decision was a recalibration of Duterte’s initial plan to “abolish”  the NFA Council. There was a need to  modify Duterte’s orders because the abolition of the Council requires legislative action.

“The removal of Cabinet Secretary Jun Evasco from the NFA Council is a loss in our fight against corruption in the importation and management of rice,” he said in a statement on Tuesday.

“Without the checks and balances that Secretary Evasco endeavored to implement, corrupt deals will continue unpunished,” he added.

Evasco was appointment NFA Council chairman through Duterte’s very first EO, where the Cabinet Secretary was given supervisory powers over 12 government agencies, including the NFA and the Philippine Coconut Authority. Both agencies have been reverted to DA supervision, Malacañang said on Tuesday.

As head of the NFA Council, Evasco had several run-ins with NFA administrator Jason Aquino. The two were at odds over the timing and mode of rice importation.

Evasco had even prepared a confidential memorandum detailing how Aquino had allegedly diverted P10 million worth of NFA rice meant for typhoon-prone Eastern Visayas to private Bulacan rice traders.

Despite Evasco’s years as Duterte’s trusted aide, the President has resisted his and lawmakers’ calls to fire Aquino. He recently even defended the NFA chief and expressed trust in him.

According to Piñol, Duterte’s instructions to the reorganized NFA Council is to prioritize buying rice from local farmers and to only import when necessary.

“Buy from the Filipino farmers first and if you could not find sufficient stocks to be bought at the price approved by the NFA Council, that’s the time you source it through importation,” Piñol quoted Duterte as saying.

Duterte also supposedly wants NFA’s buying price for rice to be increased from the current P17 per kilogram so that more Filipino farmers are persuaded to sell their rice to the government.

While the Evasco-led NFA Council had considered doing this, it also pointed out that raising the buying price of rice could lead to a spike in inflation.

Buying rice from local farmers had also been the Evasco-led Council’s advocacy, and was one reason why it did not grant Aquino’s request last year for government-to-government rice importation.

The Council had said there was no need to import because Filipino farmers had a good harvest at the time. – Rappler.com