MANILA, Philippines (UPDATED) – One faces the risk of impeachment while the other presides over the chamber seeking that ouster. Yet Chief Justice Maria Lourdes Sereno and House Speaker Pantaleon Alvarez both faced a steep decline in their net satisfaction ratings.

The March 2018 Social Weather Stations survey showed the net satisfaction ratings of Sereno and Alvarez nosedived by similar whopping 13 points each. Both officials fell to their new personal record-lows.

This is in contrast to Vice President Leni Robredo and Senate President Aquilino Pimentel III, Alvarez’s party mate, who both kept their “good” ratings.

This is 7 points below his previous record-low of neutral +8 in September 2017. Alvarez experienced ratings upgrade only among non-elementary graduates, up from neutral +9 to moderate +12.

He experienced downgrades across all ages, both urban and rural areas, Classes D and E, and both men and women.

In response, Alvarez said survey results challenge him to do better work.

While he said the 17th Congress has fulfilled its jobs in passing significant laws, he claimed that the survey results show that many Filipinos have yet to feel the impact of these laws.

“Hence, there is a need to cultivate further a more free-flowing exchange of communications to be able to reach out to a greater number of people throughout the country – to make them more aware of the reforms… There is a huge task ahead but we will persevere for all to benefit from it,” he said in a statement.

This is 6 points below her previous record-low of neutral -1 in December 2015. 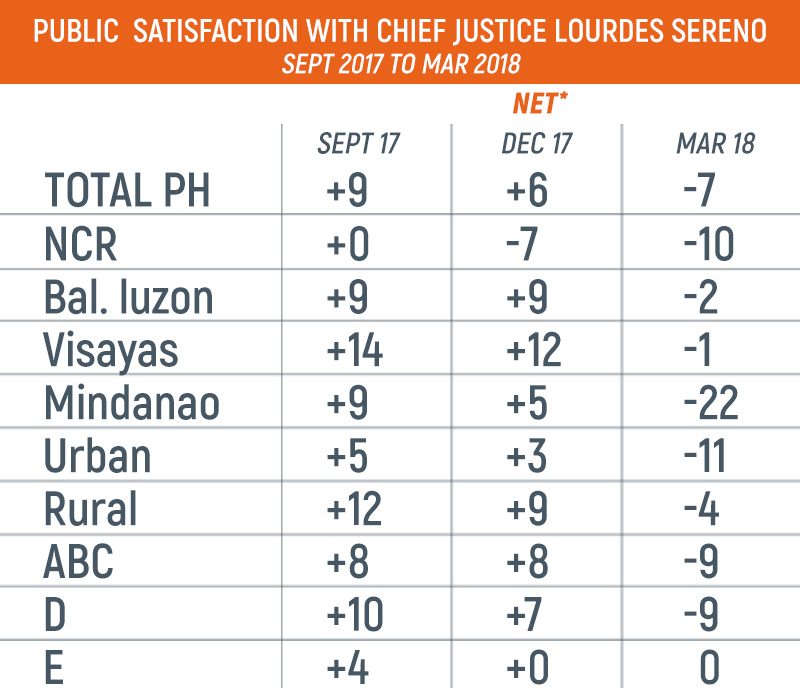 She also experienced decline in both urban and rural areas and across all age groups and classes, except in Class E where her rating remained 0.

The survey was conducted from March 23 to 27, 2018 using face-to-face interviews of 1,200 adults nationwide. It has error margins of ±3% for national percentages, and ±6% each for Metro Manila, Balance Luzon, Visayas, and Mindanao.

Among the events at the time were President Rodrigo Duterte’s string of rants against the International Criminal Court, the Presidential Electoral Tribunal’s preparation for the recount of vice presidential votes, and the impeachment hearings against Sereno, including her supposed non-filing of Statement of Assets, Liabilities, and Networth (SALN), among others. – Rappler.com