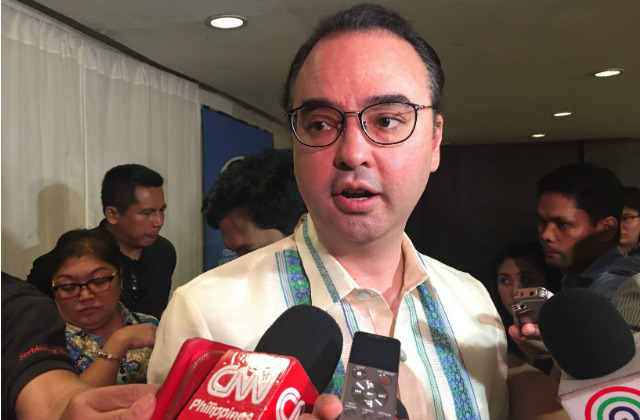 Cayetano had previously said it is no longer the Philippines’ strategy to file a diplomatic protest against China at “every opportunity we have.”

When asked if the diplomatic avenues include filing a diplomatic protest, Cayetano answered, “Yes, it may include that. It depends where and how.”

It is unlikely, however, that the Duterte administration will publicize any diplomatic protest it files against China.

The Duterte administration, after all, prefers to raise its concerns with China through one-on-one talks, in hopes that better ties with Beijing will translate to economic benefits. (READ: Duterte’s China itch)

This is different from the Aquino administration’s style of publicizing diplomatic protests to hold Beijing accountable before the rest of the world.

Based on Cayetano’s previous statements, it remains to be seen, too, whether the Duterte administration will file a diplomatic protest at all.

In a press conference on August 16, 2017, Cayetano said of the reported sighting of 5 Chinese ships in the West Philippine Sea: “In the past it was our strategy to confront China every opportunity we have, and the diplomatic protest was one of the instruments we used. That is not our strategy anymore.”

“Our strategy now is to have peace and stability and dialogue, and so far it is working,” he added.

Cayetano made his remarks on Wednesday after the Inquirer reported: “Two Chinese military transport planes have been photographed on Panganiban Reef, marking the first reported presence of this type of aircraft in Philippine territory in the South China Sea and raising the prospect that China will base warplanes there.”

“Surveillance images taken on January 6 showed two Xian Y-7 military transport planes 20 to 50 meters apart on the ramp near Runway 21 on Panganiban, one of 7 reefs in the Spratlys that China has transformed into artificial islands with military capabilities,” the Inquirer reported.

Cayetano said the “diplomatic action” on these military planes should be taken “in the context of how the dialogues are being done now.”

When asked what he means by “roll back,” Cayetano explained, “What’s the most ideal for all of us is that we return the features back to their natural state.”

Still, Cayetano said it is “not that simple” to “roll back” to the sea’s “natural state.”