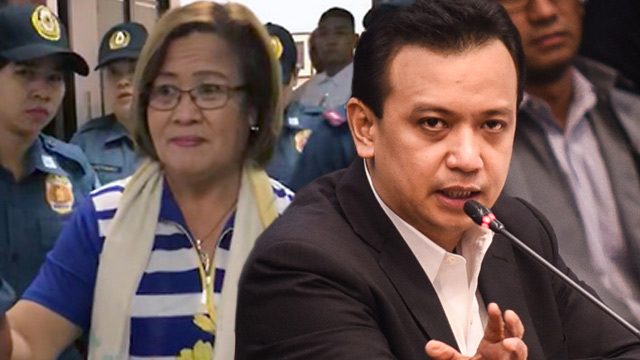 Facebook Twitter Copy URL
Copied
The two opposition senators file a manifestation, saying, '[We] strongly urge the Honorable Court to reflect on the wisdom of proceeding with this case notwithstanding the apparent lack of impartiality of some of its members'

MANILA, Philippines – In a last minute effort, two of the fiercest critics of President Rodrigo Duterte pushed for the dismissal of the quo warranto petition against Chief Justice Maria Lourdes Sereno, saying the Senate has “exclusive jurisdiction” on the matter.

“Movant-intervenors most respectfully manifest and reiterate before this Honorable Court its prayer that the present Petition for Quo Warranto dated 2 March 2018 be dismissed for Lack of Jurisdiction,” the manifestation’s prayer said.

The filing of the manifestation, however, comes a day before Sereno and Solicitor General Jose Calida, who filed the quo warranto petition due to alleged missing Statements of Assets, Liabilities, and Networth (SALN), are set to submit their memoranda.

A source told Rappler that the en banc will hold a special session on May 17 to vote on the quo warranto petition.

In their manifestation, the senators hit the “lack of impartiality” of some SC justices, citing the oral arguments on Sereno’s case held on April 10. (READ: ‘You’re oppressive!’: Sereno, De Castro face off in SC orals)

“With all due respect to the Honorable Court, the proceedings last April 10 cannot honestly be considered as wholly impartial, as to satisfy the due process requirement that those who shall here, try, and decide cases ought to possess the cold neutrality of impartial judges,” they said.

“[We] strongly urge the Honorable Court to reflect on the wisdom of proceeding with this case notwithstanding the apparent lack of impartiality of some of its members,” they said.

The two senators also questioned the SC’s decision to dismiss or merely took note of the various motions for intervention seeking the dismissal of the petition. – with a report from Lian Buan/Rappler.com