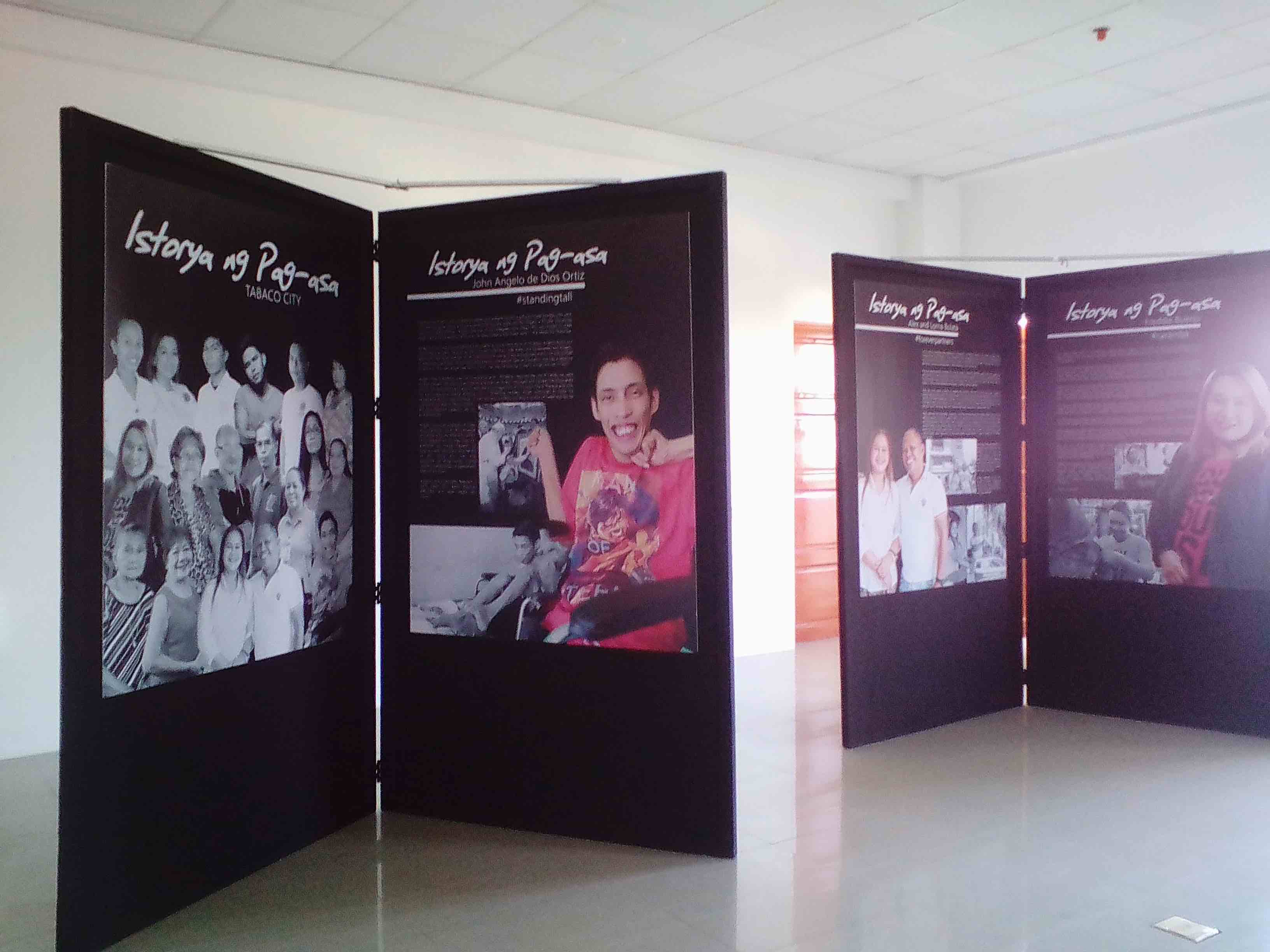 ALBAY, Philippines – If the world is made of stories, we want to fill it with hope. According to Daniel Goleman, author of the New York Times best seller Emotional Intelligence, “Hope is more than the naïve view that everything will turn out all right. It is believing that you have the will and the way to accomplish goals, even if there are big challenges.”

Such are the stories featured in Istorya ng Pag-asa (Stories of Hope), a traveling photo gallery that aims to inspire and empower Filipinos. The Office of the Vice President got the original concept from a blog, and the current host is Tabaco City from April until May.

Below are two of the 17 stories featured in Tabaco.

Couple Lorna and Alex Bolata are practical and business-minded. With P3,100 (from the pagugom and pantomina dance during their wedding), they started a small buy-and-sell business by bringing native mats and scissors to Pasig from Bicol.

However, that proved unprofitable.

That was until one day, after her daily habit to pray inside a church, God indeed showed her the way. When she went outside the church, she saw a vendor selling bananas. She approached the vendor and asked about buying and selling it, including its source.

So off they went to Pier 8 in Tondo and bought the bananas their money could afford. With the 2,250 banana bundles in hand, they realized they didn’t have the money for to transport these back to Bicol.

Around that time, someone whom Lorna knew from Malinao, a neighbor town of Tabaco, was also in the same area, and its jeepney had no backload! The couple hitched for a ride with their new products: bananas.

Little did they know that this would be a turning point for their business. When Typhoon Sisang hit the region, it devastated hectares of agricultural crops.

When they went back to Tondo, they had their own jeepney and brought home 9,000 banana bundles. Then they ventured into the bakery business, pioneering the habal-habal door-to-door delivery system in upland areas of Tabaco including Buhian, Lorna’s barangay residence.

Now, the couple is focused on running their grocery store with assorted items for sale, from food and beverage, poultry food, and drinking water, among others. It is located on the ground floor of their 4-storey house, where their family had moved in last October. Their customers include those from upland Tabaco.

When asked for a piece of advice, she said one thing: Be true to your words, especially when dealing with suppliers.

Robert “Bert” Maravilla has a mission – to change the public’s perception about mental illness. For him to do that, he volunteered to be part of the Social Work and Development Office (SWDO), as it is the local government’s department handling endorsements of mental illness cases.

Every Thursday, the team brings vagrant psychotics roaming the city streets to Holy Face Rehabilitation Center for Mental Health in Barangay Tabiguian. He makes sure that they are clean for their weekly check-up, so “he would bathe them, put on them clean clothes, give them a shave, and even cut their nails.”

He also seems familiar with the city’s vagrants, as he could tell who is the “palaban” (fighter), whether or not they have a family in the city, and who are just “naligaw” (lost) from neighbor cities and towns.

A vagrant, with only a piece of sack wrapped around his waist, passed in front of us, while Bert and I were walking near the City Hall during the interview.

That one, he told, me is among the maisog (local term for palaban). He and his team would give them food and guide them to the City Hall to prepare them for their weekly check up and medication.

What about those who resist? He said he does not easily give up on them. “Nakikita ko ang sarili ko sa kanila.” (I see myself in them.)

Yes, Bert is also mentally challenged. He also had those moments where he would wander the streets. There was a time when he brought groceries to the cashier, but come payment time, he had no money to buy them. The cashier was so mad at him, but he just smirked as the guard led him outside the mall.

That kind of “walang paki” (nonchalant) reaction, according to Bert, is “dala na ng pagiging wala sa sarili” (due to lack of self-consciousness).

He’s thankful his family did not give up on him. His father would look for him when he would go out and wander the streets. But his father died and many of his friends stayed away from him. That’s when he realized he had to stand up for himself.

Bert decided to enter a rehabilitation facility for mentally ill patients, and diligently availed of outpatient care afterwards. That experience shed the light for him, making him see that he was not alone and that medication, along with strong family support, can make mental illnesses manageable. “Tingnan mo ako (Look at me),” he said.

Now he is part of the SWDO office, not as a volunteer but a job order employee, living with and providing for his and her mother’s everyday needs.

Before we parted ways, he said he’s no longer dreaming big for himself. He need not do so because he’s already performing a huge task. To advocate for mental health and actually care for those who are struggling – not everyone can do both. – Rappler.com