Apr 23, 2018 7:35 PM PHT
Rappler.com
Facebook Twitter Copy URL
Copied
Active military personnel should present their IDs to get free rides, under a one-year deal between the Armed Forces of the Philippines and the Department of Transportation 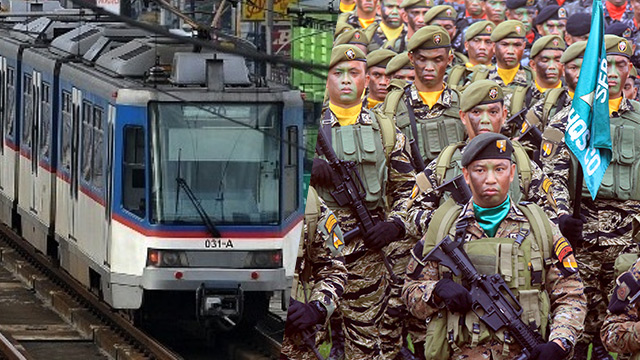 MANILA, Philippines – Active personnel of the Armed Forces of the Philippines (AFP) can get free rides at the Metro Rail Transit Line 3 (MRT3), starting Wednesday, April 25.

In a statement on Monday, April 23, the Department of Transportation (DOTr) said it will sign a memorandum of agreement with the AFP also on Wednesday.

The agreement will be valid for one year.

Active military personnel should present their AFP identification cards to get free rides.

Transportation Secretary Arthur Tugade said the initiative is a way of recognizing the sacrifices of soldiers.

(One of the hardest jobs is to be a soldier. This is just a small favor to show gratitude for their sacrifices and love of country.)

Under the deal, the AFP will also be “providing the DOTr-MRT3 ambulance and medical teams for assistance during emergency and crisis situations upon advance coordination and when available.”

All uniformed personnel can also get free rides at the Light Rail Transit Line 2 (LRT2) until December 2018, as part of a separate agreement signed last year to show appreciation for soldiers who battled terrorists in Marawi City. – Rappler.com