Robredo, Marcos to PET: No intention to violate gag order on VP protest 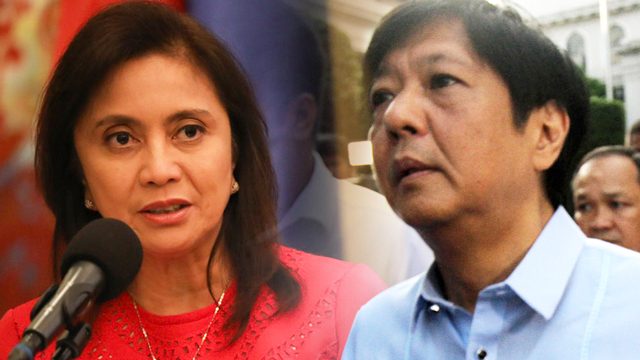 MANILA, Philippines – Vice President Leni Robredo and former senator Ferdinand Marcos Jr explained to the Presidential Electoral Tribunal (PET) that they had no intention of violating the gag order on the proceedings concerning the election protest filed by Marcos.

Both argued they did not disclose “sensitive information” about the ongoing recount of votes in the 2016 vice presidential race, and they were only responding to each other’s “misleading” claims and statements.

The PET on April 10 ordered Marcos and Robredo to explain why they should not be cited in contempt for not following the court’s reminder in February to observe the sub judice rule.

In a statement on Tuesday, April 24, a day after filing their compliance to the order, the Vice President’s camp “expressed sincere regret” to PET, and said they were “constrained to answer the frivolous media pronouncements” made by Marcos and his spokesperson, lawyer Vic Rodriguez.

“Any statements thus made were on general principles of law or otherwise in defense of the rights, honor, and integrity of the Vice President of the Philippines,” said Romulo Macalintal, one of Robredo’s counsels.

Macalintal added that “sensitive information” regarding the recount, outside of PET’s official pronouncements, “has been discussed by Marcos’ spokesperson and personalities allied with Marcos such as Atty. Glenn Chong.” He also pointed to news reports quoting an “insider” from PET.

Meanwhile, The Philippine Star reported on Tuesday that Marcos, in his compliance reply, said that their statements were “observations” on the recount, and not prejudicial to PET or its process.

However, he insisted that it was the Robredo camp who was “misleading” and “influencing” the public. Marcos cited an opinion piece by lawyer Emil Marañon III published on Rappler on April 8, which talked about Marcos’ allegations of “missing audit logs” and “wet ballots.”

This piece prompted his spokesperson Rodriguez to clarify and explain their side, added Marcos.

Marcos claimed that Marañon is a “counsel on record” of Robredo. But in the footnote of the opinion piece, Marañon is described as “one of the election lawyers consulted by the camp of Vice President Leni Robredo.” – Michael Bueza/Rappler.com