BBL passage by end of May? ‘We’ll still give it a try,’ says Pimentel 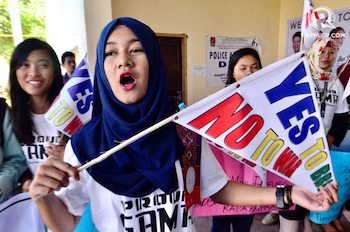 MANILA, Philippines – The Senate will try to pass the proposed Bangsamoro Basic Law (BBL) during the remainder of the second regular session of the 17th Congress from May 15 to June 1, Senate President Aquilino Pimentel III said on Wednesday, April 25.

“We will still give it a try,” Pimentel said at the Kapihan sa Manila Bay on Wednesday, when asked about the measures that the Senate will tackle when session resumes on May 15.

He said passing the administration measure before session adjourns in June is the “game plan” of Senator Juan Miguel Zubiri, chair of the Senate subcommittee on the BBL. (READ: In meeting with Duterte, lawmakers vow to pass BBL by May)

In previous meetings with President Rodrigo Duterte, lawmakers, including Zubiri, promised to pass the proposed BBL by the end of May. (READ: Lawmakers tell Duterte they’ll pass BBL by end of May)

Pimentel added that the counterpart measure in the House of Representatives was also being tackled.

The proposed BBL seeks to address the problems caused by injustices to the Moro people by providing them autonomy. Under the measure, the Bangsamoro region would replace the existing Autonomous Region in Muslim Mindanao (ARMM).

Pimentel said other items to be tackled during the remaining session days are the second package of the Tax Reform for Acceleration and Inclusion (TRAIN), the report of Senator Francis Pangilinan’s committee on charter change, and the findings of the Senate blue ribbon committee on the Dengvaxia hearings led by Senator Richard Gordon. – Rappler.com