‘My son is not an NPA,’ says mother of teenager killed in Davao clash

Apr 25, 2018 5:49 PM PHT
Mick Basa
Facebook Twitter Copy URL
Copied
Eastmincom admits it erred in the spelling of the name of the boy, but insists he was indeed an NPA child soldier 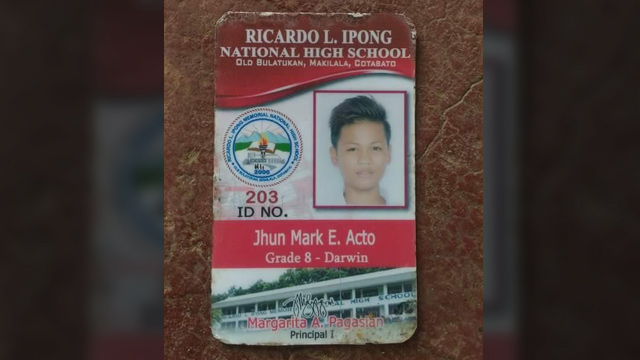 DAVAO CITY, Philippines – The mother a slain boy denied the claims of the Eastern Mindanao Command (Eastmincom) of the Armed Forces of the Philippines that her son was a guerrila fighter.

Eastmincom had earlier reported that 15-year-old Rondi Ondo was killed in an encounter between the government forces and the New People’s Army (NPA) fighters  in Davao del Sur on April 21, Saturday.

The military command report claimed that the so-called child soldier’s body was recovered “after the encounter with an M16 rifle and clad in black NPA uniform.”

Also killed in that clash was Julito Pueblas, whom the military report identified as a high-ranking rebel leader.

But the child was neither an NPA member, nor named Rondi Ondo, based on the statements of his mother and the human rights group Karapatan – Southern Mindanao Region.

“There is no truth to the military’s claim,” said Jay Apiag, Karapatan SMR secretary-general.

The child’s name was actually Jhun Mark Acto, contrary to the statement by the Eastmincom.

Rappler and another journalist in Davao City ran a fact-check to verify the military’s claim. They were able to get in touch with Acto’s mother on April 23 and interviewed her on the phone.

Maritess Acto (not Ando as earlier reported), the mother, said the military “is trying to (make it) appear that my son was an NPA (killed in the firefight) ” when he was shot by a sniper.

At around noon of April 21, she said her son was out in the coconut fields with his uncle and cousin at Barangay Astorga in Astorga, Sta. Cruz.

Eastmincom’s spokesperson, Maj. Ezra Balagtey, admitted Wednesday, April 25, that they were wrong about the child’s name. The military however, maintained that Acto was an NPA fighter.

“In the first place, why is he at the (site of the) encounter,” Balagtey told Rappler.

Maritess Acto said she was informed by the military through a phone call that her son was killed in what they called an encounter. The mother said at that time she was in their hometown Makilala, Cotabato province. Jhun Mark, meanwhile, was in Davao del Sur with his aunt “to earn some money to be used for his schooling in June,” according to a Davao Today report.

Karapatan also sent Rappler a photograph of the child’s school identification card, showing that he was a student of Ricardo L. Ipong National High School in Makilala.

It was the human rights group that got in touch with Maritess Acto on the day they learned the military came out with a statement identifying her son as an NPA fighter.

“Their recent allegations are mere proof that they are a factory of fiction,” Apiag added.  – Rappler.com