Apr 26, 2018 2:32 PM PHT
Sofia Tomacruz
Facebook Twitter Copy URL
Copied
Senators weigh in on the closure of Boracay island, with some questioning the absence of a 'clear' plan on how the government will rehabilitate the island 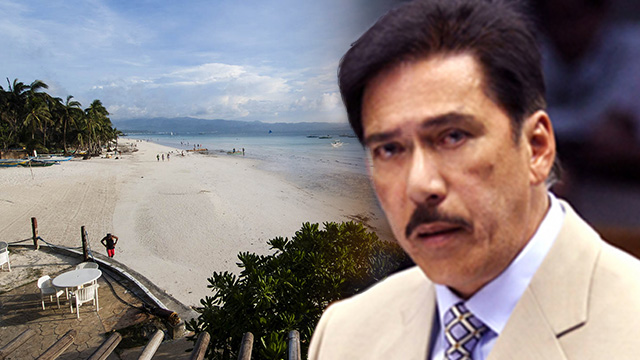 MANILA, Philippines – Businesses that would lose income during the closure of Boracay  should consider their financial losses as a small sacrifice to address the island’s problems and environmental woes, a lawmaker said. (READ: Boracay now closed)

Senate Majority Leader Vicente Sotto III made the statement in a Senate media forum, when asked about the Boracay closure which began on Thursday, April 26.

“We have to admit the fact na hindi na kasing-pristine ang Boracay ngayon na katulad noong araw. So konting tiis lang doon sa ang ating mga gamay na negosyo doon (We have to admit Boracay is not as pristine as it once was. It’s a small sacrifice for businesses there),” he said. (READ: Businesses brace for Boracay closure)

When asked who should be blamed for the state of Boracay, Sotto said all is to blame. (READ: Boracay: From pristine island to fragile paradise)

(The local government and the people there, the people going there, are all to blame. If we just cleaned up and we did not throw our garbage everywhere, and took care of the environment, it wouldn’t have led to that.)

Sotto said the Boracay closure could serve as a lesson for tourists and government agencies like the Department of Tourism and Department of Environment and Natural Resources to take care of the country’s tourism sites.

Senator Juan Edgardo Angara said the closure of the world-famous island resort should serve as a lesson for other local governments as well.

“We call on government agencies and local officials to strictly implement environmental laws and local ordinances so as to ensure their sustainable development,” said Angara, chairman of the Senate local government committee.

He also said the closure would help put the spotlight on other destinations in the country and boost other local economies, echoing the earlier pronouncement of the Department of Tourism. (READ: Philippine economy to lose up to P1.96 billion over Boracay closure)

Senator Francis Pangilinan, for his part, called out the government for depicting Boracay as a “conflict area or a war zone” with the deployment of 600 police, military, Coast Guard, and Bureau of Fire Protection personnel to the area for the duration of the 6-month closure.”It is a shame that the administration is deploying the military, police, and the Coast Guard in Boracay while China has been blatantly trespassing in our territory and disrespecting our sovereignty,” Pangilinan said in a statement.

“The only threat to the Boracay island and its residents is the government that ordered Boracay’s closure without a plan for the 36,000 people who will lose their jobs,” he added.Two days before the island’s shutdown, Senator Paolo Benigno Aquino IV questioned the absence of a “clear plan” from the government on how it would rehbilitate the island, as well as its plan for small businesses and freelancers.He earlier called on the government to give assistance to small businesses forced to close shop during the shutdown.Aquino cited the Negosyo Centers in Aklan and other nearby areas, which play a crucial role in helping micro and small enterprises by connecting them to other markets and provide them with alternative livelihood.Senator Antonio Trillanes IV earlier said he would seek a Senate probe into Boracay’s closure.

With no publicized or announced written closure order, and still no concrete plans in sight, the world-famous island’s is now closed to the public. Malacañang insists the closure is the only way to once and for all solve Boracay’s environmental issues – Rappler.com