‘Friends of the party’ in initial NPC senatorial lineup 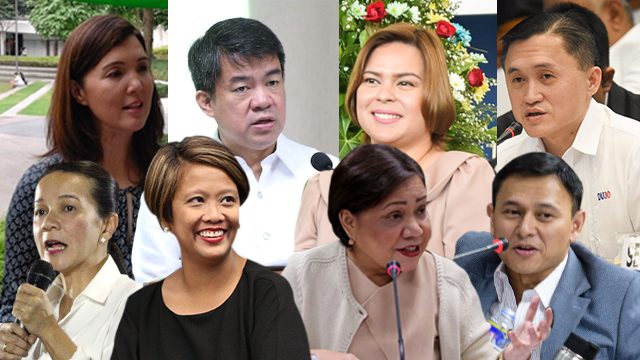 Facebook Twitter Copy URL
Copied
'They more or less fit into the ideals, objectives, and goals of the party,' says Senate Majority Leader Vicente Sotto III of the initial lineup of the Nationalist People's Coalition

MANILA, Philippines – The Nationalist People’s Coaliation (NPC) has several “friends of the party” in mind for its Senate slate in 2019, Senate Majority Leader Vicente Sotto III said on Thursday, April 26.

Answering questions from the media at the weekly Kapihan sa Senado, Sotto said the politicians were “automatically considered,” even before other parties voiced their interest in them.

Sotto said the NPC will also include in its slate Special Assistant to the President Bong Go and Davao City Mayor Sara Duterte-Carpio, should they decide to run for senator next year.

“[These are] The people we think are needed in the Senate and they are more or less in line with he objectives and ideals of the NPC,” he added.

Sotto said NPC was also considering two to 3 “private personalities” but declined to name them.

He said there was also a “big possibility” that reelectionist Senator Paolo Benigno “Bam” Aquino IV, a member of the Liberal Party (LP) would be considered for its Senate ticket, and that he had already relayed this to his colleague.

Sotto said, however, that talks with Aquino as a possible NPC guest candidate took place regardless of this.

Though the list has yet to be finalzed, Sotto said the NPC’s senatorial candidates should more or less have similar ideals, objectives, and goals as the NPC. – Rappler.com