Apr 28, 2018 8:19 AM PHT
Rappler.com
Facebook Twitter Copy URL
Copied
The members of Rappler's field team deployed to cover the recently-concluded Palarong Pambansa 2018 in Ilocos Sur were not given accreditation IDs and were barred from covering several events at the games 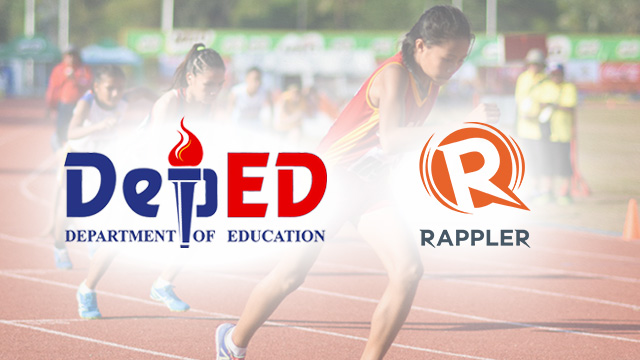 MANILA, Philippines – The Department of Education (DepEd) refused to accredit Rappler to cover the Palarong Pambansa 2018, banning the news outfit from the opening and closing ceremonies, an official press conference, and the media center.

Rappler and its provincial reporters were only allowed to cover the games for all sports held between April 15 to 21 in Vigan City and nearby towns in Ilocos Sur.

They also were not able to cover the opening and closing ceremonies, the former graced by President Rodrigo Duterte. Rappler had previously been banned by Malacañang to cover all events attended by the President. (READ: Rappler provincial reporters barred from covering Duterte’s events)

Education Assistant Secretary GH Ambat said they banned Rappler because the DepEd had terminated its various agreements with the online news organization involving the training of students and teachers in journalism and disaster management as well as the creation of online platforms for them.

Ambat was in charge of approving journalists’ applications for accreditation for Palaro.

She told Cepeda on April 14 that the DepEd’s ban was due to the Securities and Exchange Commission (SEC) decision to revoke Rappler’s registration, which is not yet final and executory. (READ: Campus journos ‘disappointed’ over DepEd’s termination of partnership with Rappler)

“Rappler can still cover the events, but they will not be issued IDs. For the opening, you just can’t be at the opening inside the stadium, but for the events naman, there’s nothing to prevent you from covering even if you don’t have IDs,” said Ambat.

“During the press conference of NSPC (National Secondary Schools Press Conference) in Dumaguete, the Secretary (Leonor Briones) already mentioned that we terminated our MOA (memorandum of agreement) with you because of the SEC decision, that they are questioning your legal personality,” she added.

Inconsistent explanation on the ban

Up until the last minute, the Rappler team was made to believe it would be accredited.

On April 4, Cepeda asked DepEd media relations officer Lawrence Cruz through text message if there was an accreditation process for news organizations that wished to cover Palaro.

Cruz said yes and gave Rappler instructions on how to apply for accreditation by April 6. Rappler was then asked to e-mail a letter with a list of the names of all its reporters and correspondents who would be covering Palaro. The letter was addressed to Education Undersecretary Tonisito Umali.

Despite follow-up text messages to Cruz and Ambat, the DepEd did not give Rappler any updates on the accreditation application.

It was only on April 13, a day before the Palaro’s opening weekend, that Cruz called Cepeda and told her Rappler would not be issued IDs.

Cruz reasoned at the time that Rappler would not be given IDs because they “did not need them,” as the company was shouldering its own expenses in Ilocos Sur.

The DepEd had sponsored the coverage of Manila-based reporters who traveled up north to cover the games. Cruz said IDs would be given to these sponsored reporters in order to “monitor” them.

Cepeda asked Cruz to put this in writing, but he did not send any document.

On April 14, Ambat herself clarified to Cepeda at the lobby of the Vigan Convention Center that the DepEd specifically decided not to send Rappler an invitation to get accreditation, in stark contrast to Cruz’s earlier statements.

Ambat made the final explanation on the DepEd’s ban minutes before a press conference of education and Ilocos Sur officials at the Vigan Convention Center.

Cepeda was able to cover the first few minutes of this press conference, where Briones announced that Davao City would host next year’s games.

But Cepeda was later kicked out of the room when the press conference went on a quick break to wait for the arrival of Ilocos Sur Governor Ryan Singson.

A staff member of Ambat texted Cepeda to meet her at the lobby. Ambat herself then approached Cepeda and told her she couldn’t cover the press conference from inside the room.

Instead, Cepeda was told to stay in the lobby and listen to what was being discussed through a speaker set up just outside the door.

“For this press conference, you have to listen dito sa labas (here outside). The speakers are here,” Ambat told Cepeda.

Despite the DepEd’s ban, however, the members of the Rappler team relied on their resourcefulness on the ground to produce both breaking news and inspiring stories from Palarong Pambansa 2018. Read all about them here.

The DepEd’s own daily Palaro newsletter even followed the human interest and inspirational stories published by Rappler about the athletes. – Rappler.com