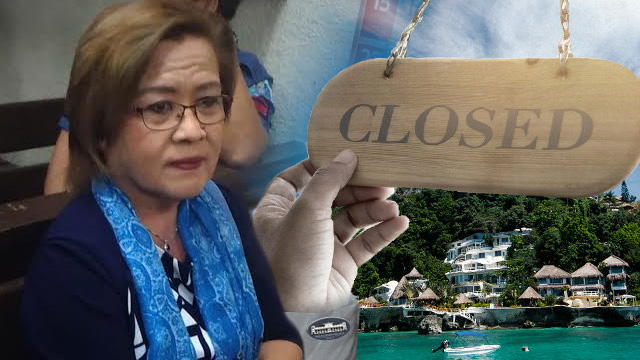 In a statement on Saturday, April 28, De Lima said she has filed Senate Resolution No. 715, urging her colleagues “to investigate if the total closure of Boracay is the best policy response to confront the problem besetting the famed island.”

Duterte ordered the closure of Boracay for 6 months starting Thursday, April 26, to resolve environmental concerns in the island. The President argued as early as February that the popular tourist spot had become a “cesspool.” (READ: Duterte signs proclamation placing 3 barangays in Boracay under state of calamity)

De Lima questioned Duterte’s order, saying his administration “failed to present consistent and clear plan of action on how to go about the island’s rehabilitation.”

“The seemingly inadequate plan to provide economic support for the residents of Boracay show how little thought, regard, empathy and care were afforded to those who will be most affected,” she added.

On the day of the island’s closure, Duterte issued Proclamation 475 declaring a state of calamity in 3 barangays in Boracay, to facilitate the speedy release of funds. But he has yet to issue an Executive Order on the closure of Boracay itself.

De Lima said the administration should have “exercised due diligence and encouraged people’s participation through public consultations” before proceeding with the closure order.  She also pushed for transparency and accountability measures.

“Having been given only a 3-week allowance to prepare for their imminent 6 months of joblessness, these affected Filipinos are being robbed of their ability to plan for themselves and have control of their lives,” she continued.

De Lima then criticized the government, saying, “As supposed advocates of federalism, decentralization and devolution, this administration is ironically exhibiting clear signs of autocratic rule as it relies on the powers and prerogatives of the central government to impose sanctions…regardless of the actual needs of the people and the environment.”

Another Duterte critic, Senator Antonio Trillanes IV, had earlier filed a similar resolution for a Senate probe into the Boracay closure. – Rappler.com