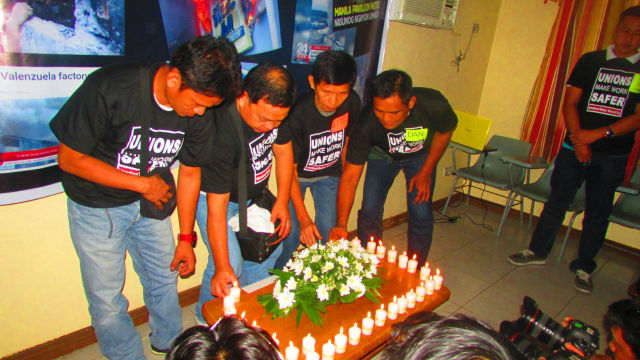 The event of the Associated Labor Unions-Trade Union Congress of the Philippines (ALU-TUCP) and its global union federation partner Building and Woodworkers International also sought to remember all Filipino employees who perished or got injured while at work.

ALU-TUCP spokesperson Alan Tanjusay said they are urging the Department of Labor and Employment (DOLE) to improve its enforcement of occupational safety and health standards after a series of workplace fires and mishaps in the past months.

He cited several work-related accidents in the past months, including the Kentex factory fire in May 2015 that killed 74 workers and the HTI factory fire in January 2017 that led to the deaths of 5 workers.

“We are hoping for immediate, positive and stronger action from the DOLE that would result [in] safer and healthier workplaces for all Filipino workers across all sectors from here on,” said Tanjusay.

“The trending workplace deaths and injuries due to non-compliance with and poor enforcement of safety and health standards must be stopped,” he added.

The Philippines is set to celebrate Labor Day on Tuesday, May 1. – Rappler.com