Apr 30, 2018 5:54 PM PHT
Lian Buan
Facebook Twitter Copy URL
Copied
The committee report from 2002 recommended that Lim be prosecuted for perjury for lying about his links to a certain Ben Go 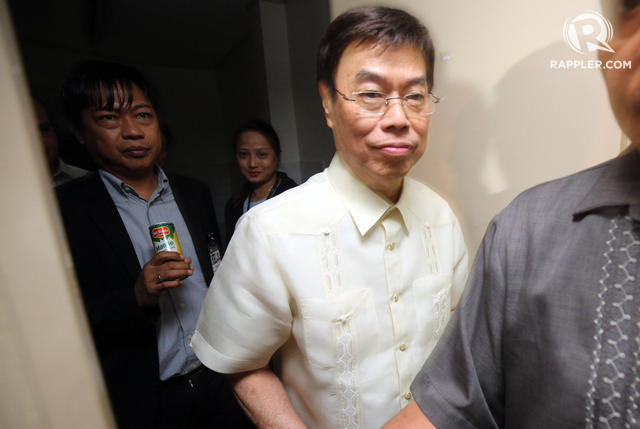 MANILA, Philippines – Government lawyers on Monday, April 30, unearthed a committee report from 2002 when the House of Representatives investigated the drug links of Cebu-based businessman Peter Lim and recommended him for prosecution for “repeatedly testifying falsely under oath.”

Committee Report No. 366 was the result of the investigation of the House Committee on Dangerous Drugs from 2001 to 2002 that linked Lim to the drug trade.

The Office of the Solicitor General (OSG) presented this report on Monday as the new Department of Justice (DOJ) panel reinvestigates the drug trade charges against Lim and alleged Visayan drug lord Kerwin Espinosa.

The commitee heard testimonies of witnesses who said Lim, his brother Wellington, and several other businessmen were involved in the drug trade – a network which, during those years, got their supplies from Hong Kong “and smuggled through the Mactan Cebu International Airport via Cathay Pacific or Philippine Airlines.”

Assistant Solicitor General Angelita Villanueva Miranda, now the lead lawyer for the government, said the committee report falls under what is called “similar acts as evidence” permitted under Rules of Court.

The 2002 committee investigation dealt with completely separate incidents than what Lim is being accused of now, but under Section 34 of the Rules of Court:

“Evidence that one did or did not do a certain thing at one time is not admissible to prove that he did or did not do the same or similar thing at another time; but it may be received to prove a specific intent or knowledge; identity, plan, system, scheme, habit, custom or usage, and the like.”

“We are introducing this, invoking Section 34,” said Miranda.

Ananias Dy testified before the House Committee then, introducing himself as the “former bodyguard of Peter Go Lim.”

“[Dy] had been tasked by Mr Peter Go Lim to escort a container van to be shipped to Manila from BNH Marketing, an establishment located in Mandaue City. [Dy] saw employees of a certain Ben Go packing white crystalline substances, which he knew as shabu, in one box that was about to be loaded onto the same container van. [Dy] identified the owner of the goods as his employer, Mr Peter Go Lim,” said the 15-page committee report.

The same container van, which contained 48.25 kilos of shabu, was apprehended by the Economic Intelligence and Investigation Bureau.

Another witness by the name Bernard Liu said Lim and his brother Wellington “got their shabu from their contacts in Hong Kong“ and “smuggled through the Mactan Cebu International Airport via Cathay Pacific or Philippine Airlines.”

Liu said he would accompany Wellington to Hong Kong to get these shabu supplies.

Lim issued a blanket denial, saying Ananias was a disgruntled former employee who had threatened to expose him, and extorted money from him. Wellington denied going to Hong Kong with Liu.

In 2006, Dy was shot by two unidentified men in Cebu City. In 2011, Liu was killed in his home in Talisay City. (READ: Is he top ‘drug lord’ Peter Lim? 9 things about the Cebu businessman)

Another witness Ursino Kiunisala aka Boy K said Ben Go was the Taiwanese owner of BNH Marketing and that he was “sure” that Go and Lim know each other.

“(Boy K) saw Ben Go at their office in Mandaue City, visiting and talking to Peter Go Lim at least 5 times in a span of 2 months,” said the report.

The report added: “Immediately after the shipment of shabu was intercepted, his boss, Peter Go Lim, instructed all of his office staff at their Mandaue office to shred and burn papers and documents relating to any and all of the corporation’s importations.”

“[Fuentes] also stated that at one point, he was tasked by Mr Lim to go to Taiwan to collect a sum of money from Mr Go…In fact he said he had been in charge of the payment of the freight and under-the-table arrangements with an employee of William Lines, for them to ‘take care’ of all of Mr Lim’s shipments from Cebu to Manila,” the report said.

Fuentes also said his family was threatened when he testified at the Lower House hearings.

The House committee “declared that Peter Lim’s defense was a mere blanket denial which could not stand against the testimonies of witnesses linking him with Ben Go, owner of BNH which packed and sealed the apprehended van containing shabu.”

The committee said Lim did not fulfill his promise of submitting to them bank documents to support his defense. Lim and brother Wellington also refused to take a lie tetector test.

“Clearly, Lim repeatedly lied about knowing Ben Go despite the positive testimony by these witnesses that they did in fact know each other,” the report said.

The committee said then that although their evidence was not enough to file a case, the DOJ could do a further build-up. It is unclear what happened to that recommendation.

The committee recommended that the DOJ track down Ben Go.

The committee also recommended that the DOJ take “appropriate action on the case for perjury against Mr Peter Go Lim for repeatedly testifying falsely under oath.”

This habit of lying, the government said, should be considered by the new DOJ panel. (READ: PNP admits fault in ‘weak’ drug case vs Peter Lim, Kerwin Espinosa)