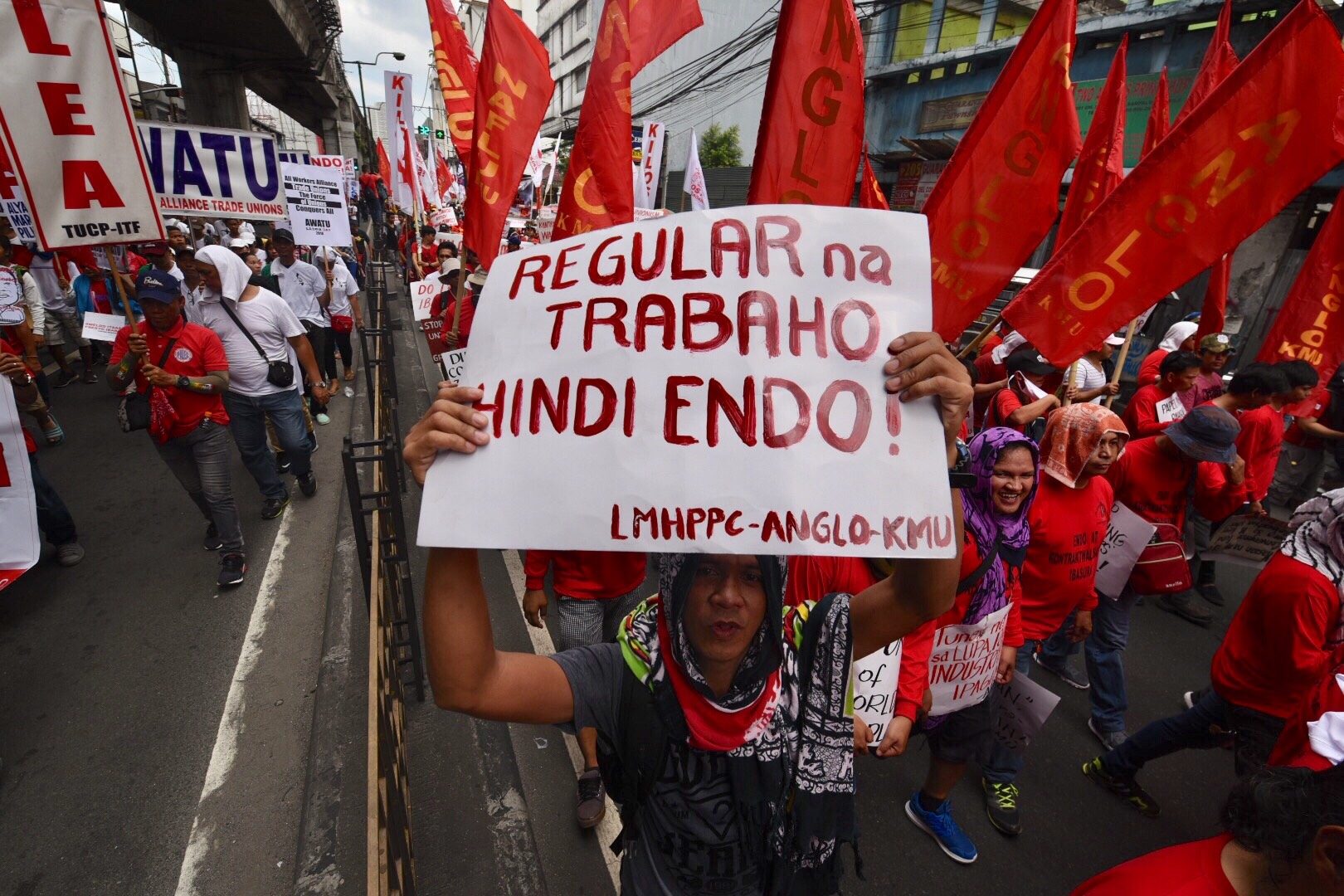 MANILA, Philippines – On Labor Day, Metro Manila roads turned red, with more than 20,000 protesters marching to Mendiola with a cry to end contractualization.

On Tuesday, May 1 at 9 am, major group Nagkaisa labor coalition with Kilusang Mayo Uno, Sentro ng mga Nagkakaisa at Progresibong Manggagawa, and many other left-leaning groups converged along the streets of España in Manila to protest against the end-of-contract (endo) schemes by establishments. On the way to Mendiola, President Rodrigo Duterte signed an executive order (EO) supposedly ending contracting practices, at the start of his speech during the government-sponsored Labor Day event in Cebu.

Signing the EO ending endo has always been the cry of labor groups, but labor groups said that the EO signed was not the one they had drafted.

It was not the version they had approved with the Department of Labor and Employment (DOLE) which was then submitted to Malacañang on April 13 for signing.

‘No use, nothing new’

The groups argued that there is “nothing new” with the recently signed EO and that it has “no use.” It was merely a “face-saving” measure to appease the workers, they said.

The version Duterte signed took out a critical provision that would have made it “a landmark” EO. What the labor groups want is for the EO to indicate that direct hiring be the “general norm in employment relations.”

“Pressed by the snowballing anger of workers after he said he won’t issue an EO, Mr Duterte signed what was essentially the DTI’s (Department of Trade and Industry) draft version, not the workers’ version,” Sentro Secretary-General Josua Mata said on Tuesday. But labor groups think that contracting practices will still be the norm, with a President who is “on the side of the employers.”

“He seems to have conveniently forgotten that under the Labor Code, the Secretary of Labor has the authority to prohibit contracting arrangements detrimental to workers. That means the President has that authority too,” Mata added. With the hopes of ending endo crushed under the new EO, a heavy afternoon downpour did not stop the labor groups from burning an effigy depicting Duterte as a demon.

Mata said that with the signed EO, “Mr. Duterte showed who’s side he is on – with the employers.”– Rappler.com