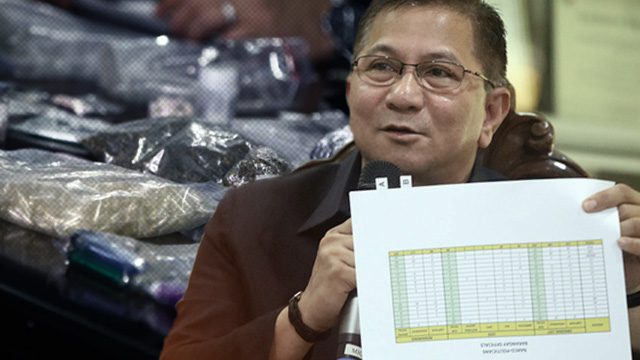 Facebook Twitter Copy URL
Copied
'If there are no evidence yet sufficient even for the filing of cases, releasing names of barangay officials may result in constitutional and legal challenges,' says league president Edmund Abesamis

MANILA, Philippines – While the League of Barangays of the Philippines backs the government’s anti-drug campaign, it’s against the premature release of unverified information.

So on Tuesday, May 1, the league called on the Philippine Drug Enforcement Agency (PDEA) to immediately file cases against barangay officials it named in its controversial drug list.

“The liga (league) agrees that candidates who are involved in illegal drugs should not get elected in the May 2018 barangay elections. The liga believes, however, that cases against those whose names are included in the list released by PDEA should be filed immediately, especially when it has been reported that the list has been verified by government intelligence agencies,” league president Edmund Abesamis said in a statement sent to Rappler.

“This should be done based on the available evidence that were used as basis for releasing the list,” he added.

Abesamis was referring to the PDEA’s decision to publicize the drug list despite admitting that cases against all the officials named are not yet “airtight.”

PDEA chief Aaron Aquino even acknowledged on Tuesday that a local official was erroneously linked to the narcotics trade in the past. That could happen again, he added. (READ: If drug list wrong, PDEA to apologize: ‘Kami ay tao lang’)

In validating the 207-name registry, the PDEA banked on its own investigation and the intelligence gathering of 3 other government agencies: the Philippine National Police, the National Intelligence Coordinating Agency, and the Armed Forces of the Philippines.

“If there are no evidence yet sufficient even for the filing of cases, releasing names of barangay officials may result in constitutional and legal challenges. This is something that we need to avoid,” Abesamis said.

During the packed press briefing preceding the release of the “narco-list,” reporters pressed the PDEA to divulge when it plans to actually file cases instead of just naming names.

Aquino said they would file some cases as early as two weeks from the list’s dissemination.

As for the rest? “In due time,” Aquino said. – Rappler.com