May 2, 2018 10:43 AM PHT
Rappler.com
Facebook Twitter Copy URL
Copied
(UPDATED) Survey results also show that a 'sizeable majority of Filipinos (66%)' are opposed to changing the present unitary system of government to a federal system at this time 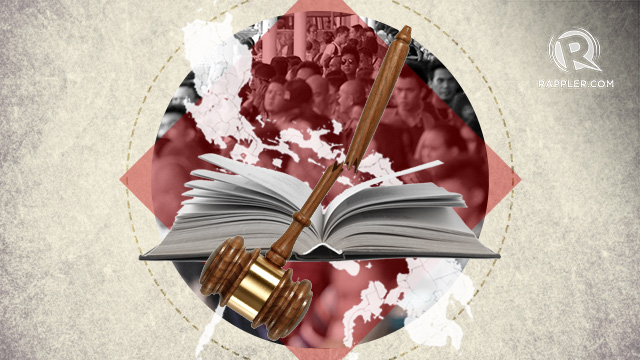 Of this total, 32% said they are “open to charter change sometime in the future but not at present,” while the same percentage are “completely opposed to any amendments, whether now or at any other time.” (READ: What you need to know about charter change) 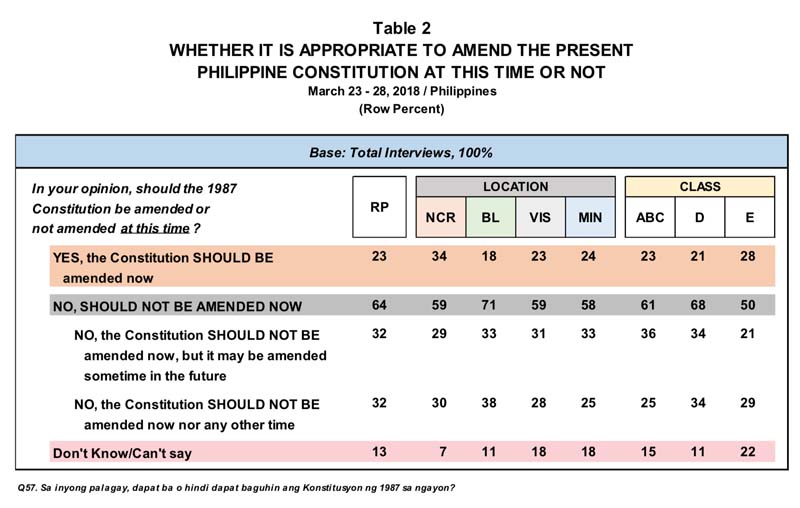 Survey results released on Wednesday, May 2, also showed that a “sizeable majority of Filipinos (66%)” at the moment are also against changing the present unitary system of government to a federal system. (READ: Will federalism address PH woes? Pros and cons of making the shift) 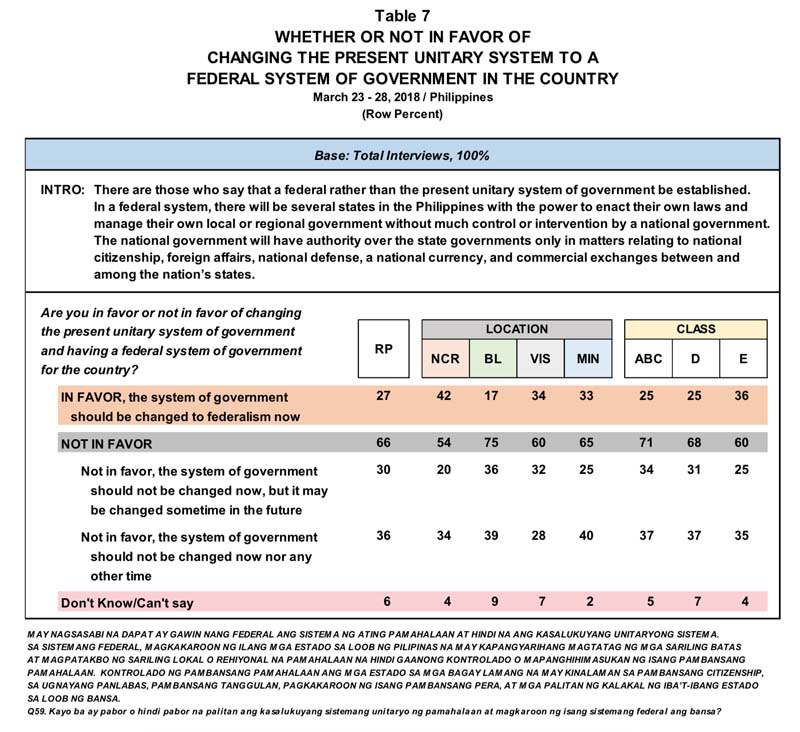 Regardless of the timing of such change, over one-third or 36% of Filipinos are against changing the system of government, but 30% indicated they may be open to it in the future even as they are opposed to changing it now.

Pulse Asia said that support for federalism is “more marked in Metro Manila, the Visayas, and Mindanao (33% to 42%)” compared to the rest of Luzon (17%). 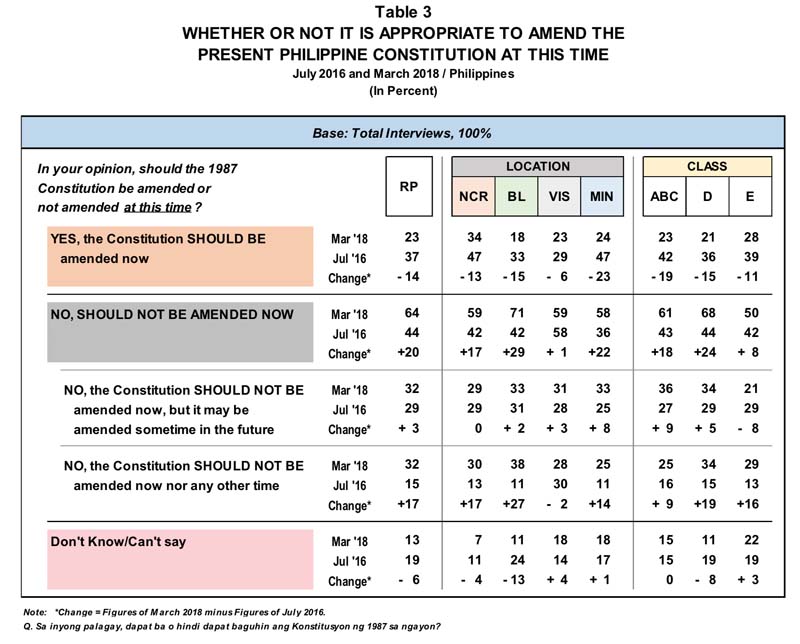 Survey results also showed that the percentage of Filipinos “absolutely opposed to charter change” or those against it “now nor at any other time” increased by 17 percentage points.

Interestingly, while there are sentiments about charter change, three-fourths of Filipinos have “little /almost none/no knowledge at all” about the 1987 Philippine Constitution. Knowledge levels, according to Pulse Asia, have not changed since the last July 2016 survey. 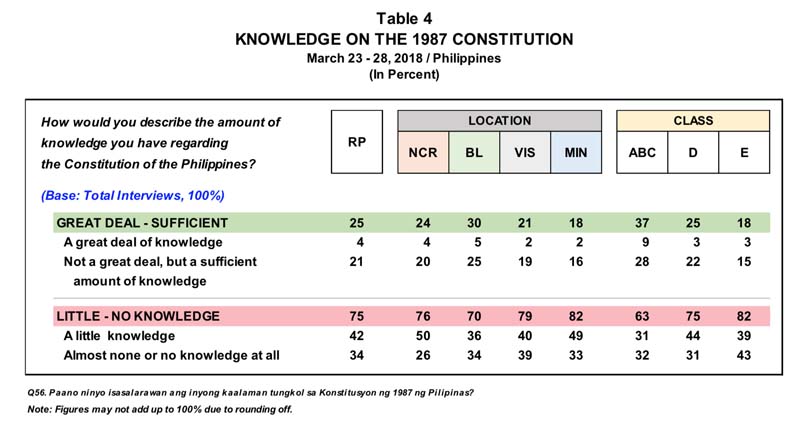 Among those who said they had at least enough knowledge of the Constitution (25%), 21% had sufficient amount of knowledge, while only 4% claimed to “know a great deal.” Compared to July 2016, the numbers have not changed significantly.

The latest survey results show that a majority of Filipinos continue to know little/almost none/nothing about the Constitution even after charter change has become one of the primary objectives of the administration of President Duterte.

The number of people with little to no knowledge about the Constitution have even increased under the Duterte administration, compared to 4 years ago.  The results of a Pulse Asia survey held in September 2014 showed that 70% of Filipinos have “little or no knowledge” about the Constitution of the Philippines at the time, despite a majority saying they are opposed to changing the country’s basic laws then. 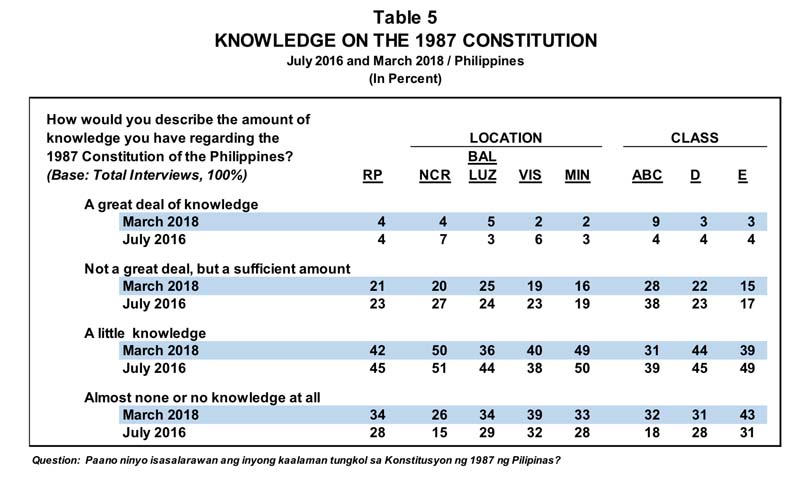 There is also a big majority of Filipinos (71%) who know little/almost none/nothing at all about the federal system of government. Of this figure, 43% have little knowledge while 27% have almost no or no knowledge at all about it.

This is evident across both geographic (62% to 79%) and socio-economic classes (64% to 75%). According to the survey, big pluralities in most geographic areas and all socio-economic groupings have “little knowledge,” while “nearly the same percentages in the rest of Luzon have either little or almost no/no knowledge at all about the proposed federal system (45% versus 34%).” 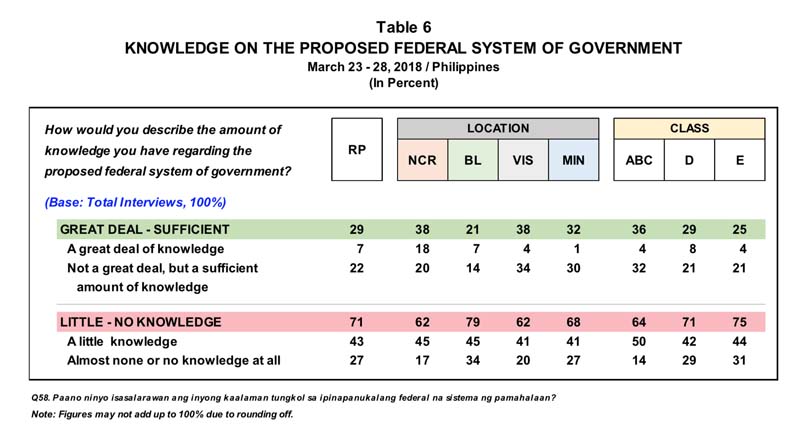 Only 29% of Filipinos say they are knowledgeable about the issue, with 7% claiming to know “a great deal” about the proposed federal system.

Close to half or 49% of Filipinos are aware of proposals to change the 1987 Philippine Constitution, with about one out of 4 or 23% in favor of charter change now.

Most of those in the Visayas (66%), Mindanao (53%), and the poorest or Class E “have not heard, read, or watched anything” about proposals to change the Constitution. 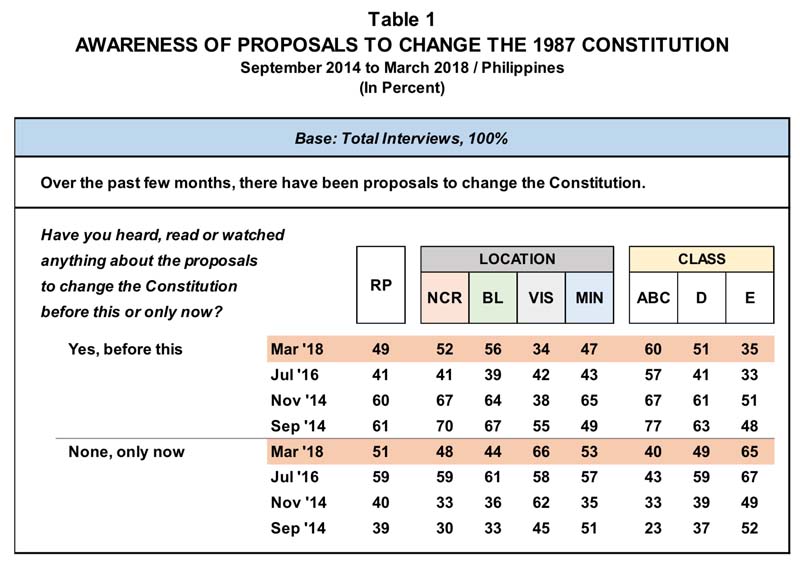 The survey was conducted from March 23 to 28, months after Duterte appointed the members of the charter change Consultative Committee (Con-Com) tasked to  “study, conduct consultations, and review the provisions of the 1987 Constitution including but not limited to the provisions on the structure and powers of the government, local governance, and economic policies.”

In Malacañang, Presidential Spokesman Harry Roque said the poll findings show that the government should work harder to disseminate information on the need for constitutional amendments.

“This implies there is still a lot of work to be done by the government in informing, educating and reaching out to our countrymen regarding constitutional reforms,” Roque said in a statement.

The Consultative Committee also expects more Filipinos to support charter change once it presents its final proposals to the public.